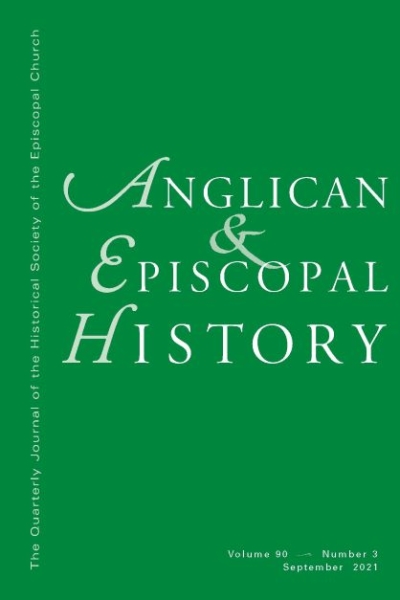 The latest issue is the first to be published under newly appointed editor Sheryl A. Kujawa-Holbrook, who serves as vice president of academic affairs and dean of the faculty at Claremont School of Theology.

The lead study by Dr. Alexander Pavuk examines the “ecumenical dance” between the Orthodox Church of Greece and The Episcopal Church hosted at General Theological Seminary in New York City during the waning days of World War I in 1918.

Pavuk, an associate professor of history at Morgan State University in Baltimore, Maryland, draws attention to the mix of Progressive political agendas, ecumenism, and ethno-political Hellenism. His study is titled “What Has Athens to do with New York? Greek Orthodox Metropolitan Meletios Metaxakis and the 1918 Conference on Unity with the American Episcopal Church.”

A second study, “The Assyrian Reliefs at Virginia Theological Seminary: A History of Decisions,” takes readers to Seminary Hill.

Using extant textual records, co-authors Amanda P. Bourne and Melody D. Knowles offer a detailed account of decisions made regarding the famed Assyrian reliefs from their time of arrival at Seminary Hill in 1859 until VTS seminary trustees decided to sell one of the two reliefs in October 2018 for a record-setting $31 million.

The authors acknowledge, “Articles that examine the decisions around acquiring and deaccessioning artifacts are rare, and there are many reasons why they are not written or published. The minefields in writing about an institution’s decisions around ancient artifacts are abundant since the assumptions behind key terms are often at odds.”

Bourne and Knowles are members of the VTS community. The Rev. Bourne is an alumna who currently serves as curate in the Episcopal Diocese of North Carolina while the Rev. Dr. Knowles is vice president of academic affairs at VTS.

Other church reviews include “A New Day for Pennsylvania Lutherans” inviting readers to the inaugural graduation at newly formed United Lutheran Seminary. Worship in the context of graduation allows readers to see how two one-time rival institutions located in Gettysburg and Philadelphia are forging a future together.

A final church review provides a glimpse of cultural synthesis with multi-lingual readings, poetry, and soulful African-American spirituals during Pentecost at Emmanuel Episcopal Church in Geneva, Switzerland, part of the Convocation of Episcopal Churches in Europe.