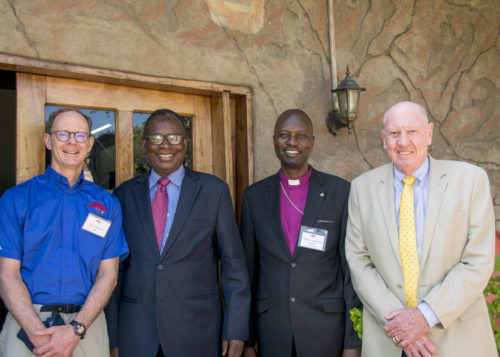 The Isdell:Flowers Cross Border Malaria Initiative convened the 4th Annual Roundtable today in Livingstone, Zambia, with the purpose of advancing malaria elimination in the cross border communities of Zambia, Zimbabwe, Angola, and Namibia.

The global drive to eliminate malaria within the next few decades requires effective coordination and communication across borders and among partners. Bishop Cleophas Lunga of the Anglican Diocese of Matabeland led Morning Prayer. He stressed the role of the Anglican Church in preventing malaria transmission within the region.

“The Anglican Church has a unique role to play in eliminating malaria within Zambia and the surrounding region,” said Bishop Cleophas Lunga. “We know that Anglicans frequently cross borders to attend church. We are committed to working with partners from all sectors in order to defeat malaria. Doing so will ensure the health and spiritual needs of our communities.”

By working in partnership with the Anglican Church, members of the Mothers Union and the Anglican Men’s Association contribute to the fight to end malaria. A sustained and committed force, they function as community volunteers in areas affected by malaria.

Throughout the three-day conference, malaria teams from the border communities, including members of the Anglican Church, and a broad range of non-profit, private, and government partners will share successes and challenges in malaria elimination, as well as new tools to address the disease.

The Minister of Health of Zambia, Dr. Joseph Kasonde, formally opened the event, emphasizing the need for increased resources and cross border collaboration. “Malaria elimination efforts will be accelerated when we strengthen cross border collaboration and coordination,” said Minister Kaonde. “The development and availability of policies, strategies, and guidelines is important. However, policies and strategies in the absence of adequate resources will render all our elimination efforts futile.”

Neville Isdell and Chris Flowers, Co-Founders of the Isdell:Flowers Cross Border Malaria Initiative, recognized the communities of Ohongo, Namibia; Ofenda, Angola; Mulobezi, Zambia; and Mwemba, Zimbabwe, for excellence in the management of malaria.

About the J.C. Flowers Foundation

The J.C. Flowers Foundation addresses critical health and social problems affecting vulnerable and hard to reach populations often overlooked by traditional donors. The Foundation works with partners in “last mile” communities to eliminate malaria in sub-Saharan Africa and support recent parolees in Harlem, New York with returning to their communities.