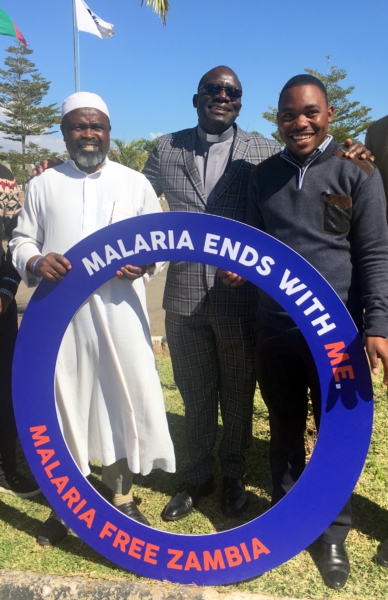 Zambia is aggressively working to eliminate malaria from the country by 2021 – an ambitious goal that requires unprecedented commitment from all sectors of society. Faith communities – led by committed religious leaders – are increasingly collaborating with the private sector, government agencies, and communities affected by malaria to advance Zambia’s malaria elimination goals. The Anglican Church within the country is taking a leading role in advocating for malaria elimination and showcased its commitment at a recent religious leaders training held in Lusaka. The Right Reverend David Njovu, Bishop of the Anglican Diocese of Lusaka, serves on the national End Malaria Council, and has taken on the responsibility of organizing all faith groups in Zambia around malaria.

Zambia’s National Malaria Elimination Centre (NMEC) has recognized the critical role of religious leaders in meeting the 2021 elimination goal and is encouraging religious leaders to advocate for malaria elimination at both national and local levels. On June 25th and 26th The Isdell:Flowers Cross Border Malaria Initiative (IFCBMI) of the J.C. Flowers Foundation, together with the Council of Churches in Zambia, sponsored malaria training in Lusaka for more than 50 religious leaders from Christian, Muslim, and Bahai religions to equip them with the knowledge and basic tools necessary to eliminate malaria within the congregations and neighborhoods that are within their care. These religious leaders represented the Baha’i Faith, the Council of Churches in Zambia, the Evangelical Fellowship of Zambia, the Independent Church of Zambia (ICOZ), Islamic Supreme Council of Zambia, and the Zambia Conference of Catholic Bishops.

The workshop was held in partnership with Zambia’s End Malaria Council (EMC), a group comprised of senior-level, multi-sectoral stakeholders that is designed to keep malaria high on the national agenda and mobilize resources in support of the country’s malaria elimination targets.

Bishop Njovu has championed malaria elimination efforts within Zambia’s Western and Southern provinces since 2008 with support from IFCBMI. His leadership is indicative of the broader Anglican commitment to eliminate malaria, and in his opening remarks, he noted that “The church mother bodies stand a great chance to influence the public and private sector in the uptake of [malaria] interventions and in resource mobilization.”

Bishop Njovu was joined by The Rev. Canon Emmanuel Chikoya, the first Anglican to take on the role of General Secretary of the Council of Churches in Zambia. Fr Chikoya echoed Bishop Njovu’s remarks in emphasizing that religious leaders must combine the use of faith and science because the two complement each other. “When you remove faith from science, science becomes blind; then you have all kinds of awkward scientific research that are also very harmful. (But) when the two work together they complement one another. The Pastor would be closer praying (while) the doctor would be there ensuring that the right medication is given. That very skill and the knowledge is all given by God. The trees and every resource that we use to find medication were given by God,” Fr Chikoya said.

Zambia is a very religious country, and the 2010 census found only 1.8% of people who claimed to have no religion. 75% described themselves as Protestant Christian, 20% as Catholic Christian, 0.5% Muslim, and 2% other (of whom many are Baha’is). As a result, clergy and other religious leaders exist in nearly all remote areas, and these leaders typically have an influential and respected voice in their community.

One major objective of the training was to facilitate the creation of multisectoral actions and joint work plans to address challenges for malaria elimination. The religious leaders developed plans to implement a range of advocacy and resource mobilization activities including trainings for pastors, conducting malaria education and sensitization during established religious festivals or conferences, and mobilizing business communities to support the purchase of malaria commodities, such as larvicide.

Apart from the action plans, the training focused on Zambia’s National Malaria Elimination strategy, in addition to the malaria elimination budget and funding gap. The faith leaders were trained on basic malaria knowledge regarding malaria transmission and prevention, as well as the different tools and strategies being used towards malaria elimination within the country, and the importance of each one.

During the training, faith leaders were encouraged to use their voice from the pulpit, with media, and in conferences or meetings to convince others to fully adhere to the prevention and elimination tools and strategies being used in their region. They were also equipped to engage in advocacy with the relevant authorities if these tools and strategies are not being offered effectively or justly by the authorities.

“These religious leaders are now equipped to serve as a bridge between communities and Government Health Departments, troubleshooting where interventions are not as effective as they could be,” shared Constance Njovu, Regional Coordinator for the Isdell:Flowers Cross Border Malaria Initiative.