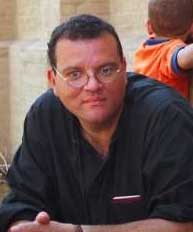 In the citation for the award, the First Freedom Center notes that White “has built an extraordinary ministry of reconciliation and conflict mediation in the Middle East” and also that “White’s standing and reputation with the most senior religious leaders in Iraq has helped him reduce not only violence against Iraq’s increasingly small Christian community, but reduce violence against all Iraqis as well.” With this award White joins a list of previous award recipients that includes Václav Havel, Tony Blair and John Wallach.

For more information regarding the First Freedom Award click here.