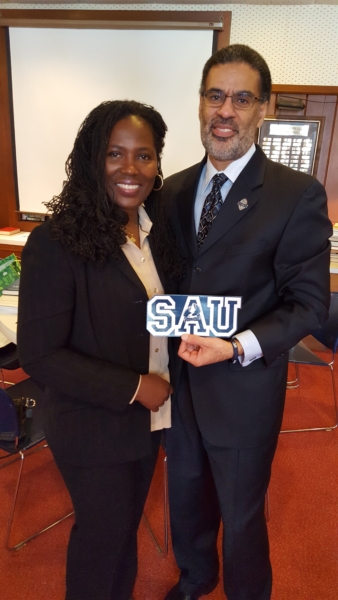 In honor of Presiding Bishop Michael Curry’s commitment to recognize the importance of supporting historically black colleges and universities (HBCUs), All Saints Episcopal Church in Saugatuck, Michigan, welcomed the participation of St. Augustine’s University (Raleigh, NC) alumni, Delores and Corie Bulluck in the worship services of February 16. The Chicago couple was invited by All Saints Interim Rector The Rev. Becky Michelfelder and parishioner Jane Underwood to talk about their experiences as students at St. Augustine’s and why it is important to have Black Colleges and Universities thrive.

The worship service was offered as “The Commemoration of Absalom Jones.” Born a Delaware house slave, Jones was a founder of the Free African Society, and with others later organized a church. The African Church was admitted to the Episcopal Diocese of Pennsylvania as St. Thomas African Episcopal Church in 1794, and Jones was ordained as a priest eight years later. St. Thomas Church grew to over 500 members in its first year and Absalom Jones became known as “the Black Bishop of the Episcopal Church.”

St. Augustine’s University, a private, historically black university, was founded by Episcopal clergy and laity of the Diocese of North Carolina, in 1867, for the education of freed slaves. It is one of two remaining such colleges in the United States. St. Augustine’s offers degrees in Business, Humanities, Social and Behavioral Studies, Mathematics, Public Health, and a division of Military Science.

As a result of Mr. and Mrs. Bulluck’s inspirational visit, All Saints Saugatuck will be in earnest conversation about how we can advance the mission of the Episcopal Church through continued support of St. Augustine’s.