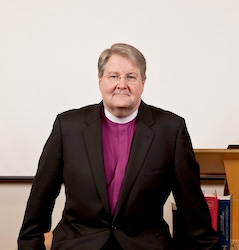 [The School of Theology, University of the South] John McCardell, Vice-Chancellor of the University of the South, announced today, June 26, the appointment of the Rt. Rev. J. Neil Alexander, Th.D., D.D, H’02, as Dean of The School of Theology. Alexander will assume the role of dean on Aug. 1, 2012. He succeeds the Very Rev. William S. Stafford, who retired on June 30 after serving in that position for seven and one–half years.

“I am delighted to be able to continue my working relationship with Bishop Alexander in this new role,” said McCardell. “The years we have served together as chancellor and vice-chancellor have been enormously productive for the University, and his numerous strengths are a perfect match for The School of Theology, which is poised to grow and embrace future challenges.”

Alexander currently serves as Chancellor of the University of the South. He will step down as chancellor, and the chancellorship will transfer to the Rt. Rev. Samuel Johnson (John) Howard, Bishop of the Diocese of Florida, until the next election by the Board of Trustees.

“As Chancellor, Bishop Alexander contributed his skills as an outstanding theologian and scholar along with a deep understanding of the University and a vision for its future,” stated Howard. “He has been an exemplary leader and facilitator for the University, always displaying the right tone and a light touch. He will be an exceptional dean for The School of Theology.”

Alexander served as counselor and advisor to the Vice-Chancellor and the Board of Regents while Chancellor. During this time, the University made a bold move by reducing the tuition in both the college and The School of Theology and later freezing tuition rates for four years for undergraduate students and for three years for M.Div. students. “Being chancellor and working with Dr. McCardell and the Board was a privilege,” stated Alexander. “To me, serving Sewanee is not only important, it brings me a great deal of joy.”

“I am glad that Neil has accepted the call to return to Sewanee to lead the seminary in the coming years,” said the Rt. Rev. Gary R. Lillibridge, H’06, Bishop of the Diocese of West Texas. “He brings a deep commitment to theological education in general and to Sewanee in particular. He has the respect of both faculty and students and he will bring a thoughtful approach to the changing landscape of theological education. His experience as a faculty member, regent, bishop, and chancellor will serve all of us well.”

Alexander has had a long-standing relationship with Sewanee and The School of Theology. He began as a sabbatical replacement for the Rev. Dr. Marion Hatchett, Professor of Liturgics and Music, in the early 1980s. He later joined the faculty in 1997 as the Norma and Olan Mills Professor of Divinity: Liturgics and Homiletics, and taught for four years before being elected Bishop of the Diocese of Atlanta in 2001.

During Alexander’s time as Bishop of the Diocese of Atlanta, he focused on growing new congregations and ministries and developing an efficient communication strategy for the diocese.

“I’ve been very blessed to be the bishop in this diocese,” explained Alexander. “The Diocese of Atlanta has wonderful DNA and is a very mission-oriented diocese. We have focused on our commonalities and not our differences.”

“I have come to know Bishop Alexander as a person who is even-handed,” said the Rt. Rev. Edward L. Salmon Jr., Dean and President of Nashotah House Theological Seminary. “I think it is an important trait in this day and age, as people who are even-handed make dialog possible.”

Alexander has served in a variety of parish settings and taught at the General Theological Seminary, Yale University, Drew University, and Waterloo Lutheran Seminary. He has been a board member of the Episcopal Preaching Foundation and a faculty member and chaplain of the Preaching Excellence Conference of the Episcopal Preaching Foundation. He also has served as president of the Board of Directors of the College for Bishops.

Alexander received his spiritual, musical, and theological formation from the Moravian Church, later becoming a priest and academic in the Lutheran Church. Having been in the Episcopal Church for more than 25 years, he can’t imagine being anywhere else. “I think of it as having been a life-long journey, deeply rooted in the practices of the Church, and without anxiety as I have always known I am in God’s hands.”

“This is an excellent appointment for Sewanee,” said the Rt. Rev. John C. Bauerschmidt, Bishop of the Diocese of Tennessee. “Bishop Alexander’s experience in both the academy and the church equips him uniquely for leadership at The School of Theology, a pivotal institution for theological education in our church. I am delighted that he has been persuaded to serve.”

Building on the firm foundation built by Dean Emeritus Stafford, Alexander sees a bright future in the School’s three-year residency model for M.Div. students. However, he also recognizes the need to provide alternatives in response to the changes in the Church’s needs. “I don’t see this as an ‘either/or’ situation, more like a ‘both/and’ position for the School,” explained Alexander. He also wants to position Sewanee as a shaper of theology for the Church, allowing the School’s highly-credentialed faculty to be present beyond the classroom. “This faculty should contribute to the shaping of the mind of the Church, through research and writing.”

“Bishop Alexander brings the exact qualities that The School of Theology needs to win national stature and recognition and the wide support of the Church, for which it is so ready,” stated William Stafford. “I enthusiastically welcome Bishop Alexander to this new position on the Mountain. I delight in his appointment and look forward to years of grace in the future.”

J. Neil Alexander was elected the ninth bishop of the Diocese of Atlanta on March 31, 2001, and was ordained and installed on July 7, 2001, at the Cathedral of St. Philip in Atlanta, Ga. At the time of his election, Bishop Alexander was the Norma and Olan Mills Professor of Divinity at the University of the South School of Theology and was priest in charge of St. Agnes’ Church in Cowan, Tenn. Previously he served as the Trinity Church Professor of Liturgics and Preaching at The General Theological Seminary, New York City, while serving in a variety of parish settings. He has also taught at Yale, Drew and Wilfrid Laurier universities.

Bishop Alexander has served the wider church in a variety of capacities. He serves as president of the Board of Directors of the College for Bishops, as a regent of the University of the South, and as a member of the board of the Archives of the Episcopal Church.

In October 2009 he was elected the 23rd Chancellor of Sewanee: The University of the South by the university’s board of trustees. The chancellor is elected from the bishops of the university’s owning dioceses for a term of six years.

In February 2011 he announced plans to leave the office of diocesan bishop in October 2012. His elected successor, the Very Rev. Robert C. Wright, will be ordained the 10th bishop of Atlanta on Oct. 13.

Bishop Alexander is the author of This Far by Grace: A Bishop’s Journey Through Questions About Homosexuality, as well a number of publications in the fields of liturgics, homiletics, sacramental theology and pastoral practice. He has led a number of pilgrimages and mission trips to dioceses in Africa and South America and is placing a special focus on relationships with global-south dioceses.