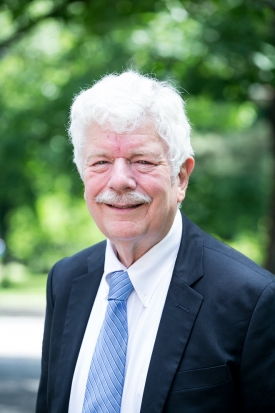 The 2021 Nelson R. Burr Prize recipient, the Rev. Dr. Alan Hayes is Bishops Frederick and Heber Wilkinson Professor of the History of Christianity, Wycliffe College at the University of Toronto.

The Historical Society of the Episcopal Church is pleased to announce the Rev. Dr. Alan Hayes as recipient of the 2021 Nelson R. Burr Prize. Hayes is the Bishops Frederick and Heber Wilkinson Professor of the History of Christianity, Wycliffe College at the University of Toronto. A priest in the Anglican Diocese of Niagara, Canada, he earned a B.A. from Pomona College, a B.D. and a Ph.D. from McGill University.

Dr. Hayes is honored for his article “The Elusive Goal: The Commitment to Indigenous Self-Determination in the Anglican Church of Canada, 1967-2020,” published in the September 2020 issue of Anglican and Episcopal History (Volume 89, No. 3), where he argues “…colonial assumptions and structures have proven tenacious, and that, although Indigenous self-determination is consistent with historical patterns of Christian mission and organization, the theological, constitutional, and financial obstacles to decolonization have defied solution.” Models which could better promote indigenous self-determination within the Anglican Church of Canada are explored.

The Burr prize honors the renowned scholar Nelson R. Burr, whose two-volume A Critical Bibliography of Religion in America (1961) and other works constitute landmarks in the field of religious historiography. A selection committee of the Historical Society determines anauthor of the most outstanding article in the Society’s journal. The award also honors that which best exemplifies excellence and innovative scholarship in the field of Anglican and Episcopal history.

The Burr selection committee also decided two other articles that merit recognition for excellent and timely scholarship. Samuel J. Richards’ “Historical Revision in Church: Re-examining the ‘Saint’ Edward Colston,” published in the September 2020 issue, investigates the legacy of a philanthropist, enslaver, and High Anglican who lived from 1636 to 1721. David M. Goldberg’s “Drink Ye All of This: The Episcopal Church and the Temperance Movement,” published in the March 2020 issue examines the Episcopal Church’s approach to the temperance movement of the nineteenth and early twentieth centuries.

Copies of each article may be found at hsec.us/news or contact Matthew. P. Payne, Director of Operations of the Society at administration@hsec.us or (920) 383-1910.