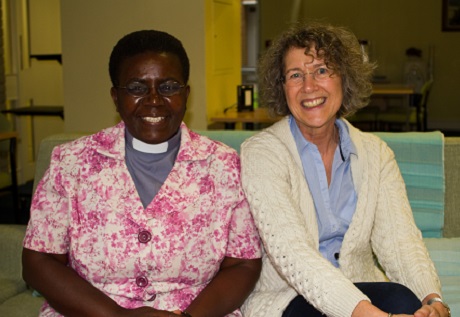 The Rev. Terrie Robinson. right, told the Standing Committee that on the issue of gender-based violence: “We can be very proud of what Anglicans are doing, but not complacent”. Here she is pictured with Uganda MU president Canon Edidah Mujinya. Photo: ACNS

The Rev. John Kafwanka stressed the holistic nature of mission in the Anglican Communion and how that is reflected in the mission work at the Anglican Communion Office. He said that two projects—a review of the companion links and a diaspora project in which they will explore how Anglicans respond to the issue of migration (people movement)—will be reported on in 2015.

He highlighted the digital presence including the one-stop-shop Resource Hub www.anglicanwitness.org where Anglicans can go to get resources on discipleship, children and young people, and general evangelistic resources. He said there had been some very encouraging responses from many places around the Communion including Lesotho, Spain, and Uruguay about the new site.

He said that three priorities for his office under Anglican Witness were discipleship; children and young people; and mobilising and sharing resources. He asked the standing committee to support a focus on discipleship for a seven year period from ACC-16, which they did. He quoted Archbishop David Vunagi who once said to him: “We have no problem filling our churches with people but they need to know what it means to be followers of Jesus Christ.”

The Archbishop of Canterbury Justin Welby welcomed the focus on discipleship agreeing with Archbishop Vunagi. He said, “The church-going habit can as easily be lost as gained,” which is why people needed to have a deep relationship with Jesus Christ through God’s Holy Spirit.

To encourage support of ministry among young people across the Communion he is proposing a Youth and Children award (organised by the Core Group of Anglican Witness: Evangelism and Church Growth) to highlight and encourage good practice. He called young people a “force to be reckoned with” particularly in “the advancement of God’s kingdom and transformation of society.”

[Pesiding] Bishop Katharine Jefferts Schori (The Episcopal Church) encouraged the award to be for work by young people rather than for young people. The Revd Kafwanka said it would be an award for work for, by and with young people. Helen Biggin (Wales) suggested that young people ought to work with the Core Group to organise the award.

The Standing Committee endorsed the development of the proposed award project

Co-director the Rev. Rachel Carnegie began the presentation by stressing that the Anglican Alliance is all about the Communion’s family of churches and agencies working on relief, development and advocacy within the context of the Marks of Mission.

The other co-director, the Rev. Andy Bowerman, said the heart of the Anglican Alliance was about was a sense of restored relationships, of listening and interdependence. He made it clear that the Alliance is not a funding agency. It is rather about connecting our work, sharing skills and building capacity across the Communion, from the grassroots up. He reminded the Standing Committee of Anglican Alliance regional facilitators based in the Solomon Islands, Bangladesh, Kenya, and Brazil. He said the Alliance had, following regional and global consultations, adopted three global themes: youth and women’s empowerment; trafficking/slavery, migration and refugees; and climate change (including food security). In advocacy, the Alliance will focus on supporting the Communion’s voice in shaping the global post-2015 sustainable development goals.

Archbishop Daniel Deng (Episcopal Church of South Sudan and Sudan) challenged the Alliance to play a positive role in representing majority world Churches to relief agencies to ensure contextually effective funding that supports the Church’s mission. Primate of the Church of Pakistan, Bishop Samuel Azariah, asked whether the Alliance could help his Province better communicate with donor agencies. Secretary General Canon Kenneth Kearon reminded the committee of the Alliance’s Agents of Change programme that was designed to do give Member Church staff the skills and language to work with funding agencies.

Louisa Mojela (Southern Africa) said it is important for Member Churches to remember that few churches have the proper skills to respond in an emergency situation, or accountability systems which is why funding agencies generally prefer to do the work themselves. Juanildo Burity (Brazil) said it was important for any Anglican relief goods be for anyone regardless of faith or background.

[Connecticut] Bishop Ian Douglas (The Episcopal Church) asked whether the role of the Anglican Alliance should occupy “a third space” between the relief agencies of the Church and the churches doing work on the ground. Mrs Carnegie said that the Alliance does indeed have a role as a broker between these two groups, providing a platform for communication and particularly in amplifying the local church voice.

The Rev. Terrie Robinson, Anglican Communion Networks Co-ordinator and Women’s Desk Officer, presented on the international networks of the Anglican Communion.* She explained that the Networks tell the stories of grass roots experience; share news and information; (some) undertake advocacy; provide information to the Instruments of Communion; and prayer and relationship-building.

Mrs Robinson said another ‘thriving’ network is the Family network. She paid tribute to its former Chair Ian Sparks who died this year. Mrs Robinson explained that under the new Chair Bishop David Rossdale the Network continues to promote the family as the place where each member can have status and have their God-given dignity upheld and protected. One way the Network is doing this is through promoting the Church’s role in Birth Registration.

Archbishop of Canterbury Justin Welby responded to Mrs Robinson’s report on the work of the Safe Church Network by stressing how important it was to ensure Churches are places where people are safe: “There’s no point at all talking about youth ministry if churches are not safe for children.”

The presentation led to a conversation about the future of the Networks.

In discussing the issues facing women across the Anglican Communion, Mrs Robinson said that “the churches have made some progress in strengthening the arm of women but the pace has generally been slow”. She said that “the way forward is not a battle of the sexes; it’s exactly the opposite. Women and men can equally own the journey towards gender equality.

Mrs Robinson’s information resource for the 16 Days of Activism against Violence Against Women is now accessible from 130 websites of Anglican/Episcopal dioceses, agencies, and education institutions. She showed the Standing Committee images of men and women in Anglican Communion Provinces including Rwanda, the Church of North India, England and Brazil working to address violence against women and girls and said, “We can be very proud [of what Anglicans are already doing], but not complacent. There is so much more to do to bring about the transformation we long to see.”

Anglican Communion Representation at the United Nations in Geneva

The Rev. Canon Flora Winfield gave the Standing Committee an overview of her new role as Anglican Communion Representative to the United Nations institutions in Geneva, and of the current and potential relationship between the Anglican Communion and the UN institutions. She said that her role included developing UN literacy across the Communion; enabling the voices of the Communion to be heard in the processes and institutions of the UN; and facilitating partnership working to increase the impact of the Communion’s Member Churches’ work on global and local issues.

Having visited a range of representatives of organisations and Churches based in Geneva, Canon Winfield identified several areas of synergy and potential. These included the Welcoming the Stranger document which emerged from the UNHCR Dialogue on Faith and Protection from faith leaders and was signed by the Archbishop of Canterbury in November last year. She explained, “This document challenges us to work for reconciliation across difference and stand with the most marginalised.”

The other priority is birth registration. Canon Winfield said, at the local level, the Church has a unique opportunity through the ministry of baptism to promote the importance of registering a child’s birth. Engaging with the issue at the UN level means the Anglican Communion can have an impact at another level: challenging national governments to do what they can to make registration universal. She added that the Anglican Communion is already doing work on this issue in several countries, not least through the Mothers’ Union.

The final presentation of the day was from Stephen Lyon updating the Standing Committee about his visit to Zambia to talk to members of the Church of the Province of Central Africa about the pending Anglican Consultative Council meeting in 2015. He said there was a real sense of pride about the event being held in Zambia with local people saying “this will be the only time in our life time that the ACC will come to us”. There was, said Mr Lyon, a great enthusiasm and a real sense of hospitality and welcome.