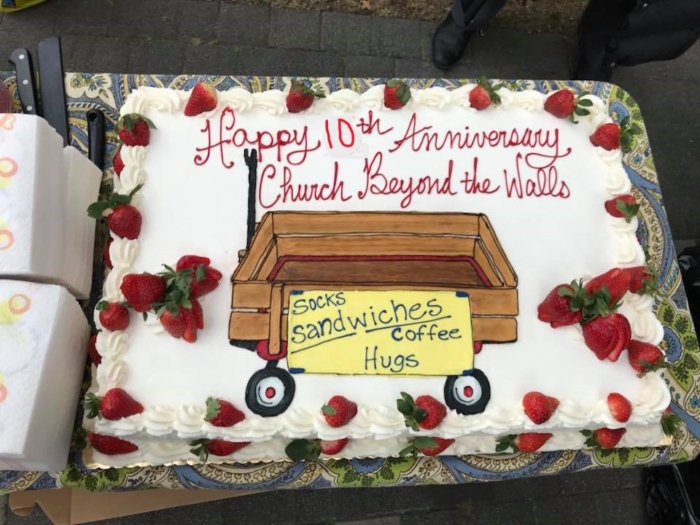 Church Beyond the Walls, a Street Church that meets in Burnside Park every Saturday at 2PM for Worship and Coffee Hour, is celebrating its 10th anniversary.

Church Beyond the Walls, a street-church that worships outdoors every Saturday, no matter the weather, is celebrating its 10th anniversary. Ten years ago a small group from Church of the Epiphany in Rumford, RI led by the Associate Priest, Father Edmund Harris, pulled a little red wagon offering Sandwiches, Coffee and Hugs down to Burnside Park. A year earlier Church of the Epiphany had been a pastoral presence at the Occupy Encampment, and after the Occupiers broke camp, Father Edmund and others began to pray about what was next. The answer came in December of 2012. They decided to bring the church to the people, instead of the people coming to the church. Worship followed in the Spring, when CBW held their first eucharist/mass in the Park to celebrate Palm  Sunday.

Every Saturday, since 2012, except when the State has shut down, during blizzards or part of Covid, intrepid volunteers and a part time missioner have headed to the Park to feed spiritual and physical hungers. All different types of people from all walks of life participate. Some are housed, some are without housing. Some have been in jail or prison, many are veterans. In 2014, when Father Edmund moved to the State of Washington, Church Beyond the Walls became a specialized Mission Church of the Episcopal Diocese of Rhode Island, and moved their hospitality preparation operation to St. John’s Cathedral in Providence. Their current missioner is Pastor Linda Forsberg, a minister in the Lutheran church.

Church Beyond the Walls will be celebrating their anniversary on Saturday December 17th at 2PM in Burnside Park. Worship will be followed by hospitality time, including cake. Unlike indoor-churches, CBW’s hospitality hour is better-attended than worship!