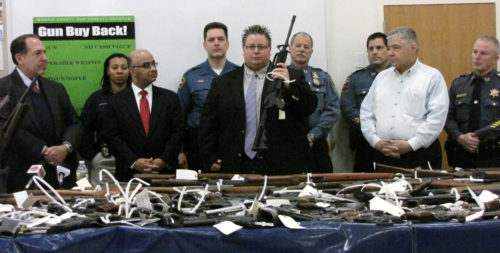 Chief of Investigations William Schievella of the Morris County Prosecutor’s Office holds an assault weapon, illegal in New Jersey, that was surrendered during the March 15-16 anonymous gun buyback hosted by the Roman Catholic St. Paul Inside the Walls in Madison, New Jersey, and St. Peter’s Episcopal Church in Morristown. Displayed in front of him at a March 18 press conference are about half of the 600 weapons collected in the program, which paid varying amounts totaling nearly $50,000 to those turning them in. Photo/Sharon Sheridan