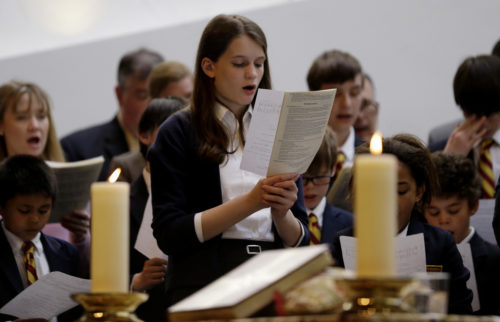 Annie Packard, 13, sings during Trinity Episcopal Church Sunday service at Temple Israel, which allowed the Trinity congregation hold service, Sunday, April 21, 2013, in Boston. Trinity is within the blocked-off area near the finish line of the Boston Marathon, where earlier in the week two bombs exploded. Packard was in the grandstands when the first bomb exploded and ran away in the direction of the second bomb, which went off 10 seconds later. (AP Photo/Julio Cortez)