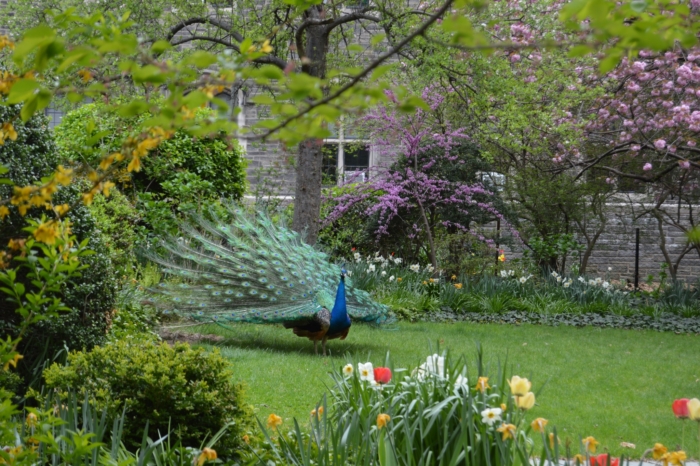 [Episcopal News Service] Jim, Harry and Phil, the three peacocks who have walked the grounds of the Cathedral Church of St. John the Divine in New York City for 20 years, are strutting off into the sunset. The iconic birds have been sent to live out their retirement at an animal sanctuary that can provide the best care for them as they age, the cathedral says.

With their brilliant plumage – except for Phil’s ghostly white feathers – the peacocks have lent an ethereal air to the 11 acres of gardens and grounds, an oasis of quiet in Manhattan’s Morningside Heights. Hatched in 2002, the three birds are named for two former cathedral deans and a former headmaster of The Cathedral School and were gifted to the cathedral by students of the school, according to the cathedral’s press release.

In the wild, peacocks typically live 10 to 25 years, but they live longer in captivity – sometimes to 40 or even 50 years. As they age, the birds are starting to require more specialized care, the cathedral said. They are developing arthritis and have had problems with their feet and legs. Several years ago, Jim suffered a foot injury that took months to heal. Last fall, Harry injured his leg, and despite undergoing surgery, he will have to wear a custom 3-D printed leg brace for the rest of his life.

This past weekend, the birds were sent to Animal Nation, a sanctuary north of the city where Harry previously underwent treatment.

“In the knowledge that the current three birds are nearing their golden ages, the Cathedral has sought to find a place where they can continue to roam freely and will receive the best possible medical attention and treatment as they grow older. While Jim, Harry, and Phil will be missed, the Cathedral is glad to provide them with a safe, comfortable retirement at Animal Nation,” the cathedral wrote.

The peacocks had lived a somewhat pampered life on the cathedral grounds, where they had their own hutch professionally designed to match the cathedral’s Gothic architecture. And they charmed visitors, neighbors and staff alike, although they sometimes made noise, fought each other, messed up the landscaping and – occasionally – escaped.

Peacocks have walked the cathedral grounds since 1972, the cathedral wrote; some were donated as chicks by the Bronx Zoo. The Very Rev. Patrick Malloy, dean of the cathedral, told The New York Times that cathedral staff were looking into replacing Jim, Harry and Phil, but having chicks on the grounds presents several problems, especially the threat of predation. Red-tailed hawks also live on the grounds, and peachicks would be easy prey, Malloy said.

“Having them go is a sadness for us, but it’s what’s best for them,” Malloy told the Times. “We want them to be happy in the last years of their lives.”