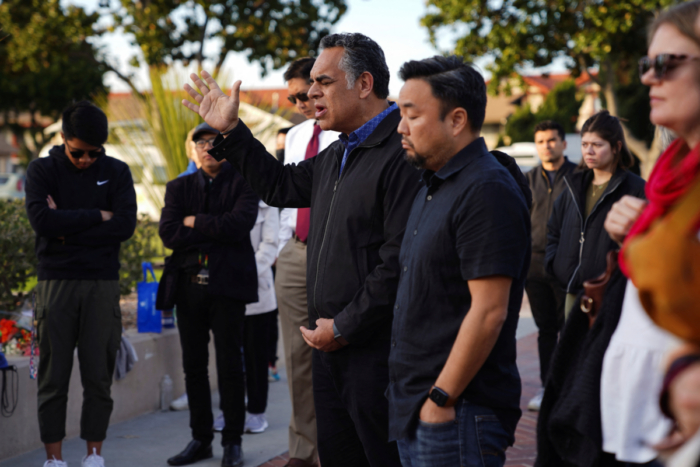 A man speaks during a prayer vigil on Jan. 22, 2023, near the scene of a shooting that took place during a Lunar New Year celebration in Monterey Park, California. Photo: Allison Dinner/Reuters

[Episcopal News Service] The Diocese of Los Angeles is inviting prayers and support for the people of Monterey Park, California, where 10 people were killed in a shooting on Jan. 21 during celebrations for the Lunar New Year holiday.

The shooting took place in a dance studio following a festival in the predominantly Asian American city just east of Los Angeles happened just down the street from St. Gabriel’s Episcopal Church, a parish that holds services in Cantonese, Mandarin and English.

“Pray for the dead and their families and friends,” Bishop John Harvey Taylor wrote in a Facebook post shortly after the shooting. “Pray for those who have been hurt and those who care for them.”

Taylor also spoke out against the lack of gun control in the United States, which enables a level of violence rarely seen elsewhere in the world, including – but not limited to – mass shootings. In 2020, 19,384 Americans were murdered using guns, the highest number on record.

“Pray that by the grace and wisdom of our God in Christ, we may devote ourselves anew to advocating for meaningful steps to reduce the risk of gun violence,” Taylor wrote. “Measures that would help just a little, saving just a few lives, would be gifts of incalculable value to each family spared the burden of mourning.”

Taylor directed Episcopalians to Bishops United Against Gun Violence, which has compiled a list of ways Episcopalians can respond to gun violence in their communities. The churchwide Office of Government Relations also has a number of resources and ways to get involved in efforts to reduce gun violence.

Taylor also referenced the tragic irony of the shooting happening during festivities for Lunar New Year, a holiday celebrated in East Asian cultures that fosters a spirit of renewal and good fortune. The festival welcomes in the new zodiac year; 2023 is the year of the rabbit.

“Pray that, by the same grace, we may so embody the love of Christ as to be a comfort and example to those around us, those known to us and those not, who may be at risk of slipping into the shadows of fear, isolation, and hatred. In the contemplative spirit of the Year of the Rabbit, may each who yearns for peace and justice experience the joy of discovering the infinity of ways they can make peace and justice manifest,” Taylor wrote.

After the shooting, the gunman went to another nearby dance studio but was thwarted by two people who wrestled a gun out of his hands, according to police. The suspect, 72-year-old Huu Can Tran, later killed himself, police said.