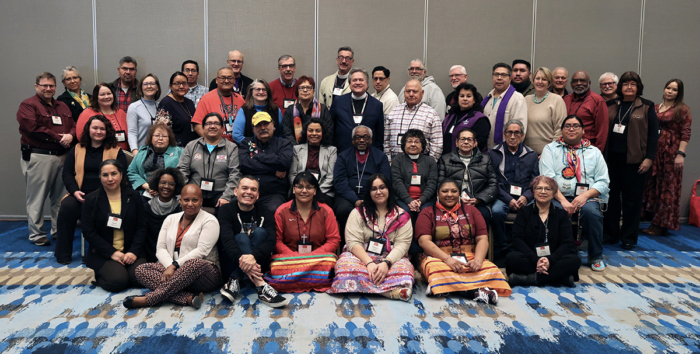 [Episcopal News Service – Green Bay, Wisconsin] The Oneida have called the Green Bay area home for 200 years since the tribe was forced to relocate from its ancestral homeland in central New York under pressure from expansionist European-American settlers and business interests. Many of the Oneida who first arrived here in the 1800s brought not only their families, traditions and culture but also the Episcopal faith.

While putting down new roots here, the Oneida established the first permanent Episcopal worshipping community in what today is the state of Wisconsin. The historic Church of the Holy Apostles located on the Oneida Reservation is often referred to as “the grandmother church” of the state’s three Episcopal dioceses.

“Holy Apostles has always been a center of our lives,” Jenny Webster, a tribal council member, said on Jan. 21 as she and other Oneida Episcopalians hosted a small, weekend gathering of Indigenous ministry leaders at the Radisson Hotel & Conference Center, an Oneida-run facility adjacent to the Oneida Casino.

The annual Winter Talk conference is organized by The Episcopal Church’s Office of Indigenous Ministries,  and this year, in addition to drawing several bishops from dioceses with large Indigenous communities, the 50 or so attendees included Presiding Bishop Michael Curry and House of Deputies President Julia Ayala Harris. 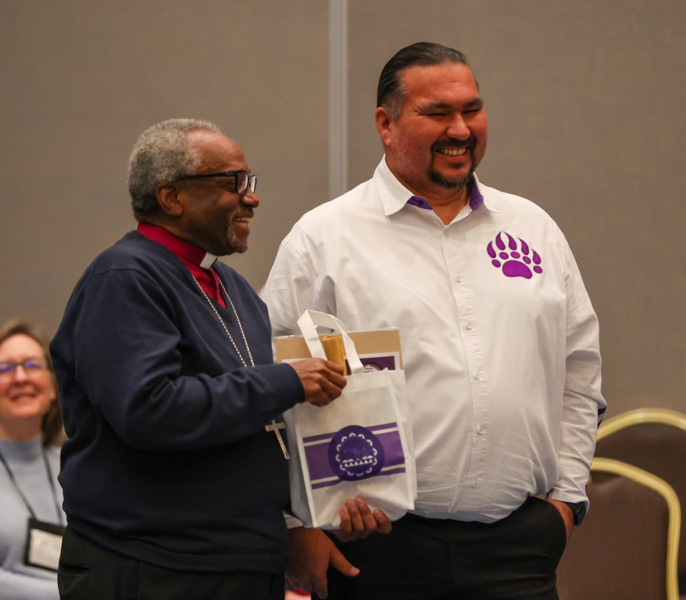 Curry and Ayala Harris underscored that they came to listen. The stories shared by Indigenous participants at Winter Talk spanned a wide range of emotions, from the joy they feel at practicing their Episcopal faith to a mix of sadness and anger at the legacy of the attempted extermination of their ancestors and their culture. Some tearfully invoked the generational trauma that lingers long after the harm done by the federal boarding school system of the 19th and 20th centuries, which sought to take Native American children from their families and assimilate them into the dominant white culture.

“Anger is going to come out when the truth is spoken,” said Warren Hawk, a lay leader in the Diocese of South Dakota and a Standing Rock Sioux tribal council member.  “I think the biggest thing of all, speaking to the anger of our people, is that we need to heal. And how can we heal, from all the generations of being downtrodden?”

The legacy of boarding schools made international headlines in 2021 with the discovery of a mass grave containing the remains of 215 children at a former Indigenous boarding school in Canada. Following the discovery, the U.S. Department of Interior announced it was launching a comprehensive review of American boarding school policies dating to 1819.

The National Native American Boarding School Healing Coalition, a nonprofit based in Minneapolis, Minnesota, has identified at least 367 schools that were part of that system, many of them run by Christian denominations.  At least nine were thought to have Episcopal Church connections, though the dearth of churchwide records has made it difficult to fully account for the church’s role in the schools. 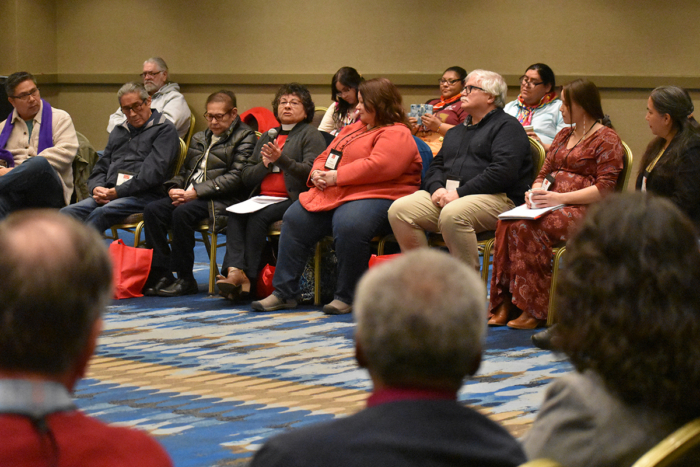 The Rev. Debbie Heckel, center with microphone, a deacon with the Oneida congregation of Church of the Holy Apostles, speaks about her service with the church Jan. 21 during Winter Talk. Photo: David Paulsen/Episcopal News Service

For the past 18 months, Episcopal leaders have considered how best to address the church’s complicity in the boarding school system. They have organized listening sessions and invited survivors and their families to share personal stories, most notably last July at the 80th General Convention in Baltimore, Maryland.

After an extended period of “holy listening” on the floor of the House of Deputies, General Convention approved a resolution calling for the creation of a fact-finding commission to conduct intensive research into church, diocesan and federal archives to document and share the untold history of Episcopal-run boarding schools. That measure also incorporated a parallel resolution calling for creation of community-based spiritual healing centers.

“When I looked at these resolutions, I see the faces my parents, as I’m sure many of us do,” the Rev. Bradley Hauff, the church’s missioner for Indigenous Ministries, told attendees at Winter Talks while seated in a circle around a small ballroom at the conference center. Hauff is Lakota, and both his parents attended Indigenous boarding schools in South Dakota. 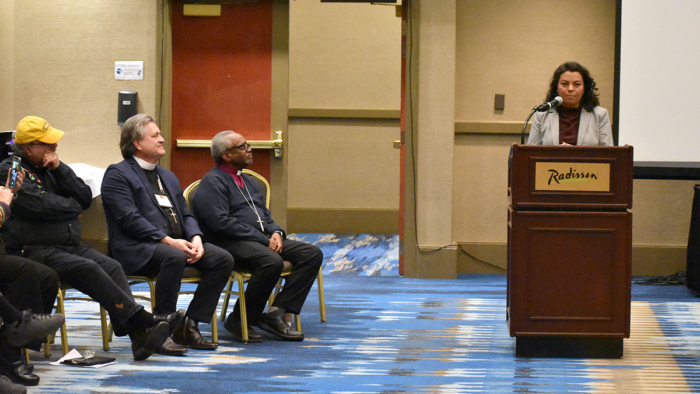 Boarding school students endured a wide spectrum of challenges and hardships. Some were forced to attend, while other families voluntarily sent their children to receive what often was the only formal education available. In some cases, students endured a nightmare of mistreatment, abuse and even death far from home. Other survivors of the boarding schools recall no physical abuse but still speak of the trauma of family separation and deprivation of their culture and identity.

The afternoon session of Winter Talk on Jan. 21 featured guest speaker Sarah Augustine, co-founder and executive director of the Coalition to Dismantle the Doctrine of Discovery.  The coalition’s name refers to a centuries-old doctrine rooted in the Roman Catholic Church’s endorsement of the post-Columbian European conquest of North America in the name of spreading Christianity, and it continued to underpin the United States’ westward expansion under the banner of Manifest Destiny. 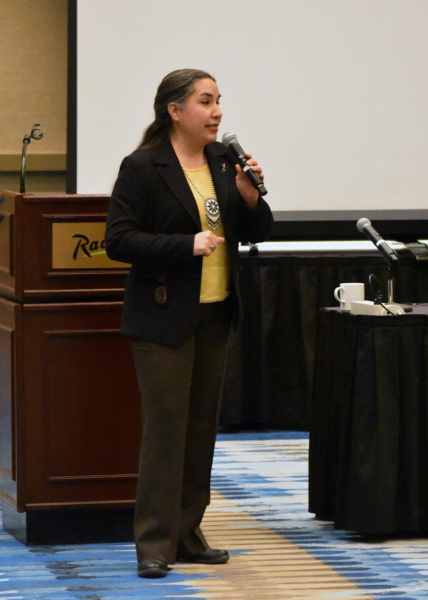 Augustine made the case that the removal of Indigenous children from their families is not only a historical injustice but continues to be a problem today through a foster care system that casually violates provisions in the Indian Child Welfare Act of 1978.  That law, now facing a legal challenge before the U.S. Supreme Court, gives tribes jurisdiction over placing Native American foster children and adoptees with families, with preference given to families in their own tribes.

Augustine, who lives in central Washington State, is Tewa and originally from New Mexico. Her father was taken from his mother as a baby and raised at a boarding school, an experience that later fueled his struggles with substance abuse, violence and incarceration.

“His story defined my story,” Augustine said, and such generational trauma is all too common in Indigenous communities. “In all the places I’ve gone, I’ve met people who’ve said, ‘I have a story like yours.’”

These experiences were not by accident, she said, but rather part of a systemic approach to reducing the numbers and collective power of the continent’s Indigenous peoples. “I am a product of the most powerful nation on earth removing me from my land, my people, my home, my language,” she said.

Curry and Ayala Harris, who are in the process of forming the Episcopal fact-finding commission mandated by General Convention, said they first wanted to attend Winter Talk and receive additional input face-to-face before proceeding. The meeting Jan. 21-23 was the first in-person Winter Talk since the start of the COVID-19 pandemic three years ago.

“We are blessed to be able to be here,” Curry said. “In your story, in our stories, with the pain and the possibility, may well be our hope as a human family.”

Among those who shared stories at Winter Talk was Kirby Metoxen, an Oneida tribal councilman and member of Church of the Holy Apostles. A year ago, during a previous online meeting of Winter Talk, Metoxen told of helping to repatriate the remains of three Oneida girls who died more than a century ago while attending the Carlisle Indian School in Pennsylvania. They now are buried on the reservation, one at Holy Apostles and the other two in tribal burial grounds. 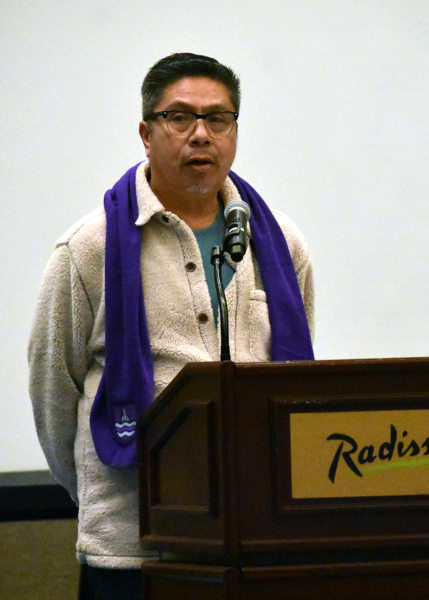 As Metoxen spoke at this year’s Winter Talk, he tried to convey the mix of conflicting emotions he feels during conversations about the boarding school system. Indigenous peoples’ anger often is directed at the Christian churches that participated in that system, he said, which sometimes causes him to question whether to feel proud of his own Christian faith.

At the same time, he tends to focus his own thoughts forward, on how to alleviate such pain. “I’m thinking about it a lot,” he said. “And I think it’s just acknowledging that it happened. It can’t be corrected. … Nothing you give me is going to make it go away.”

Metoxen and other Oneida Episcopalians also happily shared what their church has meant to them, particularly Holy Apostles’ beloved Oneida Hymn Singers. Metoxen said he never learned how to speak his tribe’s language, but from listening to the hymns in church, he knows enough to sing along. He concluded his remarks by singing the doxology in Oneida.

The Oneida choral tradition dates to the tribe’s earliest experiences with the Episcopal faith more than 200 years ago, Edna Cornelius-Grosskopf said. “When we came from New York, we brought those songs with us,” she said. They have been treasured by the Oneida for generations.

Cornelius-Grosskopf’s childhood memories include listening to her father singing hymns at night, in the dark with his eyes close, tears running down his face. “I have this Oneida singing in my blood,” she said. “The songs have sustained us.”