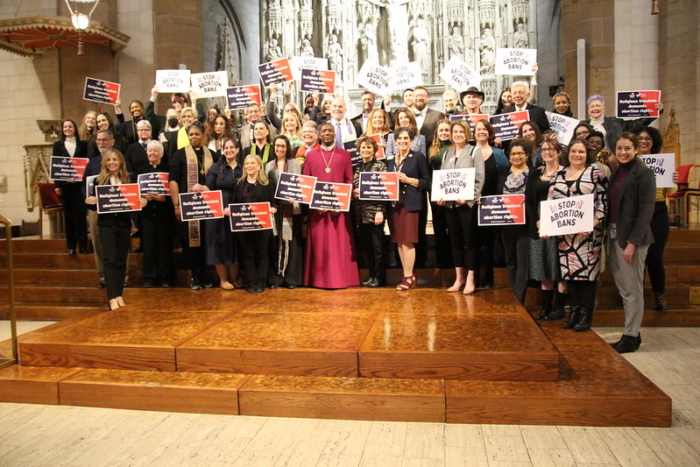 The clergy members came together Jan. 19 at Christ Church Cathedral in St. Louis to announce their support of the lawsuit. They are represented by Americans United for Separation of Church and State, the National Women’s Law Center, and two legal firms. Following their press conference, the group symbolically processed from the cathedral to the courthouse for photos.

The lawsuit, “Rev. Traci Blackmon v. State of Missouri,” states that Gov. Michael Parson and the Missouri Legislature violated the state constitution by imposing their personal religious beliefs about abortion into law. Missouri was one of the first states in the country to ban abortion after the Supreme Court overturned “Roe v. Wade” last year.

“The Missouri constitution ensures a strict separation of church and state,” said Blackmon, executive minister of Justice & Witness Ministries of The United  Church of Christ. “Our elected officials have violated their oath to uphold that constitution by weaponizing religious beliefs to deny abortion access in a state where studies prove these actions are not the will of the majority of the people.”

The faith leaders are asking the 22nd Circuit Court for the city of St. Louis to issue a permanent injunction striking down the abortion bans. The lawsuit states that HB 126 and earlier statutes and regulations restricting abortion violate the Missouri constitution that prohibits state officials from compelling people to support or participate in any religious activities or beliefs, favoring any particular religion, or using public money to support religion.

Missouri’s expansive abortion ban was passed in 2019 and included a trigger ban that prohibited all abortions with no exception for rape or incest and only the narrowest exception for medical emergencies involving the life of the pregnant person. It went into effect in June 2022 immediately upon the U.S. Supreme Court decision striking down “Roe v. Wade.”