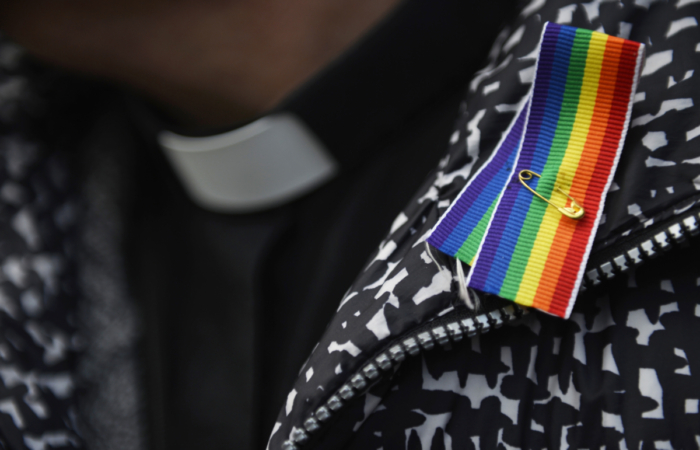 A priest wears a rainbow ribbon during a vigil outside the General Synod of the Church of England in London on Feb. 15, 2017. Photo: Hannah McKay/Reuters

[Episcopal News Service] The Church of England released the details of a proposal to offer blessings, but not marriage, to same-sex couples on Jan. 20. The proposed prayers and liturgies would be the church’s first-ever formal recognition of same-sex relationships, though they would not change its traditional teaching on marriage and would be optional for clergy to offer.

The church’s bishops also issued an apology to LGBTQ+ people for the “rejection and exclusion” they have faced in the Church of England and “affirm[ed], publicly and unequivocally, that LGBTQI+ people are welcome and valued.”

Archbishop of Canterbury Justin Welby commended the proposal and the years of churchwide work that led to it, but said that in his role as an “instrument of unity” for the Anglican Communion, he would refrain from using the prayers himself.

“Because of my pastoral care and responsibility in being a focus of unity for the whole Communion, I will – while being extremely, joyfully celebratory of these new resources – I will not personally use them in order not to compromise that pastoral care,” Welby said during a Jan. 20 press conference announcing the details of the proposal.

Welby – joined by Archbishop of York Stephen Cottrell, the church’s second-highest-ranking cleric, and Bishop of London Sarah Mullally – framed the proposal as a way to accommodate the diversity of views on sexuality within the church, echoing his role in mediating the sexuality debate in the Anglican Communion at the 2022 Lambeth Conference.

The bishops will present the plan to the church’s General Synod – made up of the Houses of Bishops, Clergy and Laity – when it meets Feb. 6-9 in London. Along with the proposed liturgies for blessings, the bishops have also committed to revising the church’s rules for the personal lives of clergy, which currently require all clergy not in a heterosexual marriage to practice celibacy.

The proposal is the result of a six-year initiative called Living in Love and Faith, a process that started after General Synod reached an impasse on same-sex blessings and marriage in February 2017. The ensuing 6-year process produced a comprehensive review of the various perspectives, teachings and resources on LGBTQ+ issues in the church, involving working groups, surveys and studies.

In his remarks, Cottrell acknowledged the pain and frustration that same-sex couples have experienced by being denied the opportunity to have their Anglican faith be a part of their relationships. Cottrell began to cry when telling the story of two priests who entered a civil partnership and celebrated in the garden of a church, but could not go inside and say a prayer.

“All of that changes” now, he said. “I’m really pleased it’s changing … and I know it’s not enough for some and I’m really sorry it’s not enough. … But I think it puts the Church of England in a better place. And I really hope that we can hold together our unity. And I cry out for those who hate what we’re doing, and say, ‘We want to hold you together in this.’ But this is the fullest pastoral provision that we can offer at the moment without changing legislation, which would take years anyway.”

The bishops’ apology included in the document also acknowledged the pain caused by the Church of England to LGBTQ+ people within and outside the church.

“The occasions on which you have received a hostile and homophobic response in our churches are shameful and for this we repent,” the bishops wrote. “As we have listened, we have been told time and time again how we have failed LGBTQI+ people. We have not loved you as God loves you, and that is profoundly wrong.”

The proposal emphasizes that the church’s centuries-old teaching on marriage as the union of a man and woman has not changed. Rather, the liturgies recognize a variety of same-sex relationships that are not analogous to Holy Matrimony but share many of its characteristics, like love, fidelity and mutual support. The liturgical resources – titled Prayers of Love and Faith – include prayers of dedication, thanksgiving and guidance, and blessings for a couple’s relationship, home and family.

They also include rites that resemble marriage in the profession of lifelong commitment, and exchanging rings, though the word ‘marriage’ is never used. Among them is a rite for the “sealing of a covenanted friendship,” referring to a type of committed same-sex relationship that is loving but not sexual, similar to the biblical stories of Ruth and Naomi or Jonathan and David – a type of relationship more common in the early church that has been recently advocated by celibate gay Christians.

The draft prayers and liturgies are intended for couples who have “marked a significant stage in the development of their relationship, formed a covenanted friendship, registered a civil partnership or entered into a civil marriage.” Same-sex marriage has been legal in England since 2014, but the Church of England – the established state church – sought exemption from that law, so it is against both church law and English law for a same-sex couple to be married in an Anglican church.

Equal, a group advocating for same-sex marriage in the Church of England, strongly criticized the proposal.

“It seems that instead of the new inclusion we had been promised, we are to be cautiously offered no more than a few stale crumbs,” the group wrote in a Jan. 19 statement. “Apologies are easy to offer, but what God calls for is repentance – and repentance requires real change to patterns of behavior. It appears from the rest of the proposals that there is little intention to do so.

“According to that unchanged doctrine which the bishops have reaffirmed, sex outside marriage is sinful and the only acceptable form of marriage is between a man and a woman. The bishops seem to be saying both that same-sex relationships are wrong and that they can be blessed. This is inconsistent and incoherent, and it certainly isn’t radical inclusion.”

Equal, however, welcomed the bishops’ commitment to replace the church’s document outlining the expectations for clergy’s personal lives with new guidance by mid-2023, but expressed dismay at not knowing whether clergy who are already in same-sex marriages would be allowed to continue serving.

The proposal would put the Church of England where The Episcopal Church was when blessing liturgies were approved in 2012, the Rev. Susan Russell, chair of The Episcopal Church’s new Task Force on LGBTQ+ Inclusion (mandated by General Convention in July 2022), told Episcopal News Service.

“While blessings are inarguably a step forward … the church is still perpetuating a kind of sacramental apartheid for same-sex couples seeking the sacrament of marriage,” Russell said. “As the struggle continues, we’ll continue to stand with our Church of England siblings just as we continue to stand with same-sex couples in jurisdictions in The Episcopal Church where they still do not have unfettered access to the same sacraments their opposite-sex siblings do.”

In the reflection and commentary included in the document, the bishops state that “blessing” is not necessarily a statement of approval, as in the secular sense of the word, but an invitation for God’s grace.

“They are prayers, not pronouncements. God will answer as God chooses,” the bishops write.

The question of whether same-sex sexual activity is sinful, as the Church of England has traditionally taught, is left open-ended. It is only addressed in a reflection that reiterates the church’s teaching that sex is reserved for marriage, but acknowledges that this is a rare perspective in the 21st century, noting that most heterosexual couples who marry in the church are already living together or have children. The document acknowledges that many of the same-sex couples who will use the new blessing liturgies have a sexual relationship.

“How the Church responds to this reality in a way that continues to encourage holiness in holding faithfulness and commitment together with sexual intimacy is another area where convictions among us differ, and where it is important to create a generous space for one another’s consciences,” the bishops write.

The document emphasizes repeatedly that clergy will have full discretion over whether they will use the rites at all, which ones and in what circumstances.

“It is envisaged that these resources can be used flexibly, thus anticipating not just the varied pastoral situations a parish priest may encounter, but also the different convictions clergy may have,” the bishops write. “Some clergy might choose to use all the resources to dedicate, give thanks for, and pray God’s blessing on two people in an exclusive committed relationship. Others might only wish to use some of the resources, for example, to celebrate a covenanted friendship or to give thanks for a same-sex relationship. Still others might not want to use any of the resources on the basis of conscience. When the prayers are commended, bishops will respect all clergy regardless of the position they take regarding the use of these resources.”

The archbishop of Canterbury is the senior bishop and a principal leader of the Church of England, and the ceremonial head of the Anglican Communion. Welby has been criticized by some conservative bishops in other Anglican provinces for being too accommodating of churches that allow same-sex marriage, including The Episcopal Church; some have threatened to leave the Communion based on Welby’s actions, though the Church of England’s internal policies have no effect on other Anglican provinces. Divisions over same-sex marriage boiled over at the 2022 Lambeth Conference, which bishops from three African provinces refused to attend.