The Michigan Legislature opened last week with Democrats in control of both houses and the governorship for the first time in 40 years. Gun safety measures rank high on Michigan Democrats’ agenda, including legislation that would expand background checks for firearm purchases, toughen parents’ legal responsibility to curb children’s access to guns and implement so-called “red flag” measures when citizens are deemed a threat to commit violence. 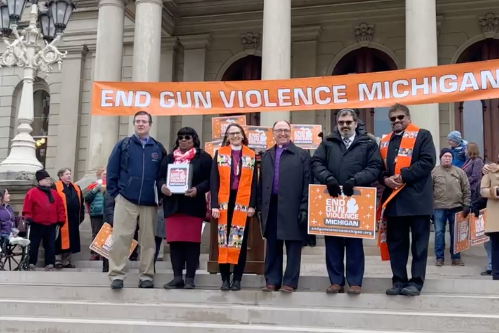 Faith and civic leaders who support gun law reforms participate Jan. 18 in an advocacy day in Michigan, including on the steps of the Capitol in Lansing.

“They campaigned on it, and we’re here to ensure those promises are kept alive, like our kids and our friends and our neighbors. It has to be our top priority,” Michigan Bishop Bonnie Perry said in a morning news conference on the steps of the state Capitol in Lansing.

“We’re here for a day of action,” Perry said, noting that parallel events were scheduled in Detroit, Grand Rapids, Kalamazoo, Saginaw and Marquette, where Northern Michigan Bishop Rayford Ray led an anti-violence prayer service. Another event was planned in Oxford, where four high school students were killed in a November 2021 shooting.

“We have students and teachers, faith leaders, labor unions, elected officials and doctors, all coming together to say enough is enough. Let’s end gun violence now in Michigan,” Perry said.

End Gun Violence Michigan was formed in 2022 by a coalition of faith-based and secular organizations to advocate for what they say are popular, common-sense gun-safety measures. A person is killed with a gun every eight hours in Michigan, and every two hours a person is injured in a non-fatal incident involving a gun, according to a study of the impact of gun violence in the state by the Center for American Progress.

Perry and other speakers also underscored that gun deaths involving children are on the rise and that firearms now are the leading killer of young Americans, surpassing motor vehicle deaths.

“This has happened while the Legislature has sat on its hands and done nothing for years,” said Bishop Prince Singh, provisional bishop of the Dioceses of Eastern and Western Michigan. The state’s voters gave the newly elected Legislature a mandate, Singh said. “They’ve spoken for common sense gun violence laws,” he said, and now End Gun Violence Michigan is calling for passage of those laws within the legislative session’s first 100 days.

The Episcopal Church has long advocated for gun-safety measures in response to the increase in gun-related violence in the United States. General Convention has passed resolutions aimed at reducing gun violence dating at least to 1976, and churchwide efforts in recent years have been led by the Bishops United Against Gun Violence network, of which Perry is a convener and Ray and Singh are members.

State Rep. Brenda Carter, a Democrat from Pontiac, spoke at the Jan. 18 news conference in Lansing to encourage continued faith-based advocacy on issues of gun violence. As vice chair of the state House of Representatives’ Firearm Safety and Gun Violence Prevention Caucus, Carter described her own grief at losing her son and nephew to gun violence.

“I campaigned on these issues. … We intend to get it done,” Carter said.

“We know that advocates like you have been knocking on doors in Lansing for years,” she said. “I want to encourage you to keep speaking out, keep organizing, keep your voices out there, because what you’re doing is saving lives. You’re saving lives, because every day somebody is a victim to gun violence.”