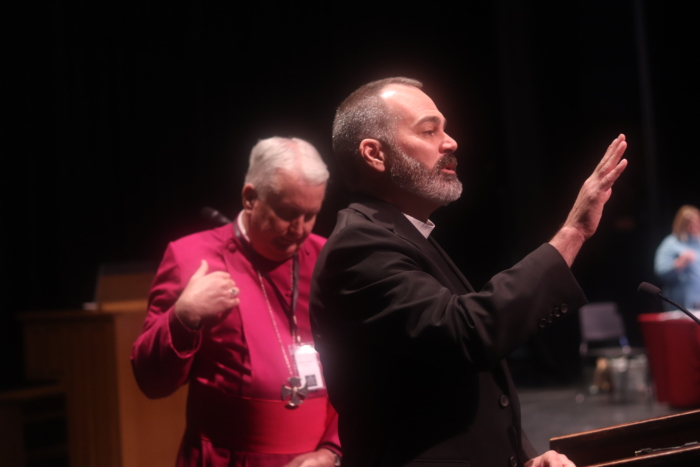 [Diocese of Central Florida] In an election marked by both unity and diversity, the Diocese of Central Florida has elected the Rev. Justin S. Holcomb, 49, as its fifth bishop. Holcomb, who has served the diocese as canon for vocations since 2013, was elected on Jan. 14 on the first ballot out of a slate of three nominees at a Special Electing Convention held at Trinity Preparatory School, Winter Park, Florida. He received 63% of votes cast in the lay order and 60% of votes cast in the clerical order. Per the diocesan canons, an election requires a simple majority of 50% plus one in each order.

Holcomb briefly addressed the convention after the announcement of his election, thanking his fellow candidates, the Very Rev. Charles “Roy” Allison, rector, St. James Episcopal, Ormond Beach, Florida; and the Rev. Stacey “Stace” Tafoya, rector, Church of the Epiphany, Denver, Colorado, along with all those who led and supported the election process.

“I am excited about the opportunities for our diocese,” he said. “It is my great privilege and joy to be chosen to serve in this role and to serve with such a gifted group of lay leaders and clergy. I am looking forward to getting together with you and supporting you – both lay and ordained – in the ministries to which the Lord has called each of you.”

“The most important and last thing I want to say is from Romans 1:15-17,” Holcomb added, quoting: “For I am not ashamed of the gospel, for it is the power of God for salvation to everyone who believes. For in it the righteousness of God is revealed from faith for faith, as it is written, ‘The righteous shall live by faith.’”

Ordained as a priest on May 28, 2006, Holcomb has also taught theology and apologetics at numerous seminaries for 22 years and has also written or edited 20 books. Prior to his current position, he served as a priest at a parish in the Episcopal Diocese of Virginia, was an executive director of an interdenominational ministry and held various other ministry positions. He earned his Ph.D. in theological studies from Emory University and also has both a Master of Arts in theological studies and a Master of Arts in Christian thought from Reformed Theological Seminary as well as a bachelor’s in biblical studies from Southeastern University. He is married to Lindsey Holcomb, and the couple has two daughters, Sophia and Zoe.

Under the canons of The Episcopal Church, a majority of bishops exercising jurisdiction and diocesan standing committees must consent to the bishop-elect’s ordination as bishop within 120 days of receiving notice of the election. Pending completion of the consent process, Holcomb’s Consecration is scheduled to take place June 10, 2023, at Calvary Orlando in Winter Park, Florida. He will succeed the Rt. Rev. Gregory O. Brewer, who has served as diocesan bishop since 2011 and announced his mandatory retirement last year.

In a letter to the diocese the month before the election, Brewer pointed out that the Standing Committee designed the entire election process in such a way as to represent the diverse range of people in the Diocese of Central Florida. Members on both the Search Committee, which presented the three candidates, and the Transition Committee, which oversaw the election process, represented the present spectrum of diversity: clergy and lay, older and younger adults, and included a wide variety of ethnic and language backgrounds.

“The application process, intentionally developed in a way that did not make an initial application contingent on a nomination, encouraged applications from a wide pool and resulted in six applicants,” Brewer wrote. “Though we have a significant number of female clergy in the diocese – both Anglo and of color – it should be noted that no women applied. Of the six applicants, 1/3 were Latino, and of the three final candidates, one is Latino.”

Bishop for Pastoral Development Todd Ousley, who oversees elections in The Episcopal Church, addressed the significance of the election results in terms of diocesan unity.

“Like most dioceses in The Episcopal Church, Central Florida specifies that an election occurs when both lay and clergy orders vote on the same ballot with a simple majority of delegates in each order,” Ousley said. “Both an election of the first ballot and majorities of 63% and 60% respectively provide a sense of significant diocesan concurrence with the outcome and indicate significant support for the bishop-elect.

“In my congratulatory call to Bishop-elect Holcomb, I encouraged his recognition of significant support beyond that of a simple majority and the need to prayerfully reflect upon those portions of the diocese that will need pastoral attention as he moves toward being ordained as the fifth bishop of Central Florida,” he added. “He had already begun such reflections – an encouraging sign for the diocese and the wider church.”

Diocesan leaders were also quick to respond to the election of their fifth bishop and to point to both unity and diversity. “I am very pleased that the candidate who won the election did so by such a significant majority,” Brewer said. “This signals strong support across the diocese for Bishop-elect Justin Holcomb. I am looking forward to our serving alongside each other in the coming months. I have every reason to believe that he will do a fine job as the fifth bishop of Central Florida.”

“The Diocese of Central Florida is blessed to have the Rev. Canon Dr Justin Holcomb as its bishop-elect,” said the Very Rev. Reggie Kidd, Search Committee member and dean of the Cathedral Church of St. Luke, Orlando. “Having known him as student, colleague and adviser, I am overjoyed to see him called to a role that fits his gifting, temperament and character so perfectly. Justin has unique pastoral gifts, he is adept at strategic planning, he models unity in diversity and he is theologically profoundly grounded.

“Through the diligent research and interviewing done by the Search Committee to nominate our candidates, the tireless work of the Transition Committee to give us opportunities to get to know them and then that committee’s planning and pulling off the Special Electing Convention, and the extraordinary efforts of dozens of volunteers at the Convention, God has given us ‘a faithful pastor, who will care for our people and equip us for our ministries,’” said the Rev. Tom Rutherford, president of the Standing Committee for the Diocese of Central Florida and rector, Church of the Messiah, Winter Garden.

“Congratulations and God’s blessings to the Rev. Canon Dr. Justin Holcomb,” said the Rev. Michelle Roach, chair of the diocese’s Becoming Beloved Community Task  Force and rector of Christ Episcopal Church, Longwood. “The diversity shown in the participants involved in the process of electing the bishop is commendable. During the listening session with the Canon Nelson Pinder Union of Black Episcopalians Chapter of Central Florida and the Becoming Beloved Community Task Force, then-candidate Holcomb recognized the important work of these two organizations, which keep focus on having diversity throughout all aspects of the diocese. It was gratifying to hear in his acceptance speech that as bishop, he will support the weighty work that is carried out by both of these groups.”

“I am humbled to call The Reverend Canon Dr. Justin Holcomb my friend and future pastor,” said the Rev. José Rodríguez, chair of the diocese’s Hispanic Commission and member of the Transition Committee. He is also co-rector, Christ the King Episcopal Church, and vicar, Iglesia Episopal Jesús de Nazaret, both in Orlando. “Bishop-elect Justin has written countless books speaking truth to abuse of power and fighting for the dignity and worth of sexual abuse survivors. As the first Latino ordained priest in our diocese, I witnessed him work hard with Bishop Greg Brewer to form a new generation of clergy that included countless Latinos and members from diverse and underrepresented groups. His commitment to diversity is real, genuine and sourced from his love of Jesus. I am full of hope for our diocese.”

The Diocese of Central Florida is comprised of over 25,000 people worshipping in over 80 congregations across 15 counties in Central Florida. It stretches from Crystal River, Ocala and Ormond Beach in the north to Port St. Lucie, Okeechobee and Lake Placid in the south, with Orlando as its major metropolitan center.