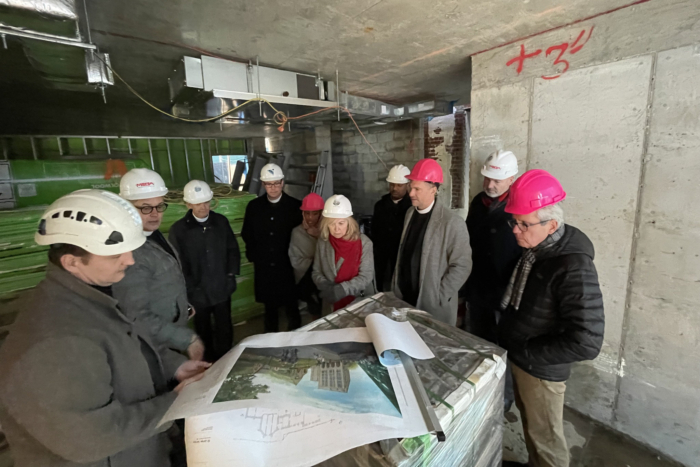 [Episcopal News Service] St. James’ Episcopal Church in the Bronx borough of New York serves about 500 people through its parish food pantry. Low-income households, like those receiving the pantry’s assistance, also typically use banks less than the general population. Soon, they and others with ties to the Diocese of New York will have access to a range of financial services through a new entity called the New York Episcopal Federal Credit Union.

The credit union, a diocesan start-up ministry, received its federal charter in November. Now, its volunteer board is finalizing plans to launch operations and welcome its first members later this year.

Across the United States, federally insured credit unions function as member cooperatives – an alternative to for-profit banks. “The existing banking system is for the benefit of banking shareholders,” said the Rev. Matt Oprendek, priest-in-charge at St. James’, who is on the credit union’s inaugural board of trustees and has served as co-chair of the diocese’s credit union task force. “Our target is not just to provide an alternative to middle class folks who may not want to work with a bank,” he said. The Episcopal credit union hopes “to reach the people who don’t use banks at all.”

About 7 million U.S. households do not have a bank account, according to the most recent federal estimates, and low-income and minority households are among least likely to use or have full access to professional financial services.

There are more than 5,000 federally insured credit unions in the United States, each with a specific “field of membership” – the criteria for membership, as specified by each institution’s federal charter. Those criteria mean credit unions are open only to a subset of the general public, however, the Episcopal credit union was fortunate to secure a rather broad field of membership, Oprendek said. Eligibility will include all worshipers, volunteers, church staff and educators of the Diocese of New York, as well as anyone who participates in or benefits from Episcopal outreach programs in the diocese.

An Episcopal credit union is a way to “develop an institution that actually reflects the values that we say are ours, that then puts that power in the hands of shareholders,” the Rev. Winnie Varghese said in a webinar about the credit union before the diocese’s convention in November. “People in the community are in charge of their own funds and can be in the work of empowerment.”

Varghese, now rector of St. Luke’s Episcopal Church in Atlanta, Georgia, previously served as a priest at Trinity Church Wall Street and was a leading advocate for the New York diocese’s credit union. Unlike a bank, Varghese said, “the credit union says of all of its members, your values, your collective values become our institutional values, so that means that we can serve people who haven’t been served.”

Studies have found that banks, for example, tend to open more branches in affluent communities than in poorer neighborhoods, and to minimize risk, they may implement barriers to equitable access to their services, such as minimum deposits or restrictive lending practices, Oprendek said. Lower-income households often turn instead to check-cashing businesses or payday lenders, which charge high rates for their services.

“We want to offer an alternative to that,” he said. The credit union “is owned by the people who have money in it,” so it will have more flexibility to accept new members, provide small emergency loans, host financial wellness seminars and offer other basic services.

The New York Episcopal Federal Credit Union received $250,000 in start-up money from the diocese and another $250,000 from Trinity Church Wall Street. The credit union board also has launched a fundraising drive to raise an additional $300,000, enough to fund the first five years – covering operating expenses such staffing, office supplies and computer technology. After that, the credit union hopes to have enough members to be sustainable without additional outside funding.

The National Credit Union Administration, the federal agency that regulates credit unions, approved the diocese’s credit union charter on Nov. 7. It was the third such institution to be federally charted in 2022. Nationwide, there now are 156 that are designated as faith-based or primarily faith-based credit unions, according to records provided to ENS by the agency.

“The creation of New York Episcopal Federal Credit Union means members, especially those of modest means, will now have greater access to safe, fair, and affordable financial products and services,” Todd Harper, the agency’s chairman, said in a news release. “Faith-based credit unions play a vital role in supporting their communities, and this new credit union continues that tradition. Through financial education and savings products, the organizers of New York Episcopal will put their members on a path to financial security and success.”

The New York credit union will be one of at least three operated by Episcopal entities. A congregation in New York’s Harlem neighborhood, St. Philip’s Episcopal Church, has operated its own credit union since 1951, primarily for the congregation’s members. And the Diocese of Los Angeles created the Episcopal Community Federal Credit Union as an economic justice ministry in 1994, in response to the civil unrest that followed the 1992 acquittal of four Los Angeles police officers in the beating of Rodney King.

Credit unions are an effective economic justice ministry because services can be tailored to the needs of low-income families, Urla Gomes, the longtime CEO of the Los Angeles credit union, told ENS. “We should have more and more Episcopal credit unions around the country, so that low-income people have a place where they can make their deposits, get their loans.” 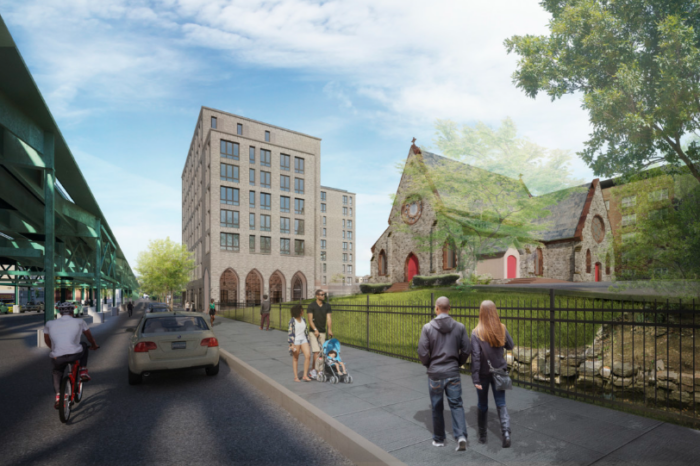 A housing redevelopment project at St. James’ Episcopal Church in the Bronx, New York, as seen in this artist’s rendering from Dattner Architects, will include space for the headquarters of the New York Episcopal Federal Credit Union.

The roots of the New York credit union date to 1988, when the 69th General Convention passed a resolution calling for The Episcopal Church to “establish a ministry of community investment and economic justice directed to community-controlled economic development programs.” Creating credit unions was one of the steps recommended by the resolution.

In 1990, the Diocese of New York passed its own resolutions, committing 10% of donations to its endowment funds to economic justice efforts and pledging to create a task force to recommend projects. Although a credit union was identified as a possibility, diocesan plans were slow to materialize. In 2003 and 2004, the diocese passed additional resolutions to consider “the steps necessary to create a credit union.”

Such efforts didn’t gain momentum until 2014, when the diocesan convention voted to “authorize the establishment of a task force to prepare a charter and solicit initial grants and deposits to establish the Episcopal Diocese of New York Credit Union.”

After several years of research and planning, the task force submitted its application for a federal charter to the National Credit Union Administration in December 2020. The task force spent most of 2021 and 2022 responding to the federal agency’s requests for more materials, information and revisions, before receiving word that the application had been approved.

New York Episcopal Federal Credit Union’s headquarters eventually will be housed at St. James’ in the Bronx in a building adjacent to the church that is being redeveloped as housing and office space. Additional branches will be located in a building on the campus of Cathedral Church of St. John the Divine in Manhattan’s Morningside Heights and at Trinity Church Wall Street in lower Manhattan. The credit union also plans to establish a physical presence in Ulster County, serving the northern part of the diocese.