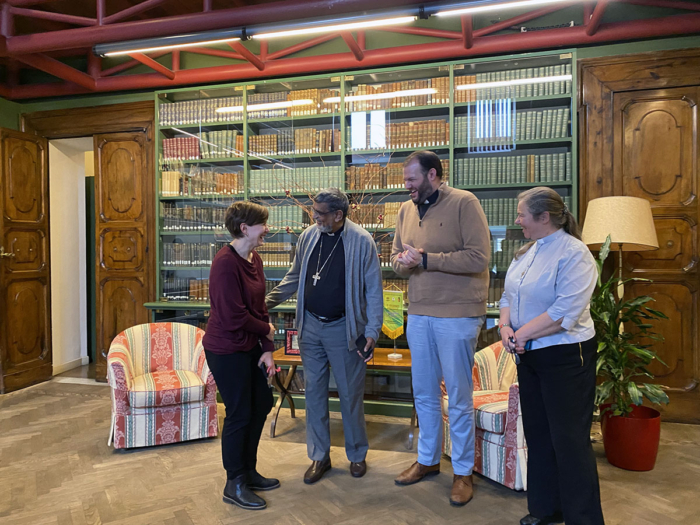 [Episcopal News Service] Every Tuesday, the Anglican Centre in Rome hosts a midday Eucharist in the Chapel of St. Augustine of Canterbury followed by a lively luncheon on its premises in the Doria Pamphilj Palace in Roman College Square, just steps from the Pantheon in the heart of the Italian capital’s historic center.

“Since Vatican II, when the center was founded, thanks to visionary and generous benefactors at the time, it has been important that the Anglican Communion has the equivalent of an embassy in the Eternal City,” the Rt. Rev. Michael Burrows, chair of the center’s board of trustees, told Episcopal News Service during a mid-December visit to the center. “This is a place of networking, a place of hospitality, a place of study, a place where all sorts of conversations take place, as befits the sense of the diplomatic, as well as the ecclesiastical nature of Rome.” 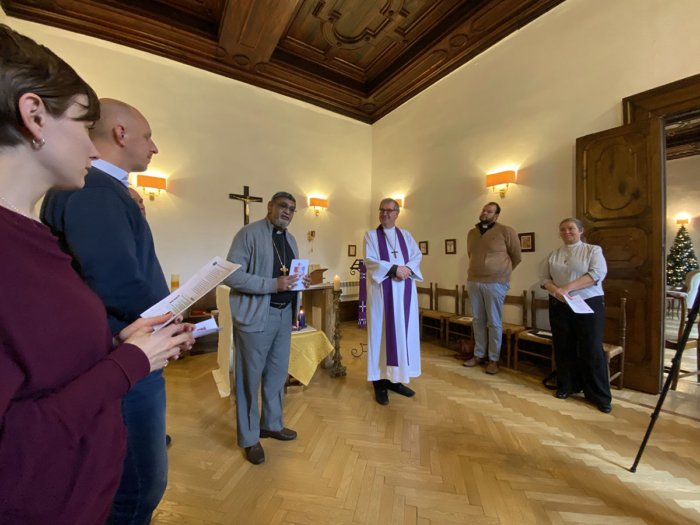 The Rt. Rev. Ian Ernest, the center’s director, left, and the Rt. Rev. Michael Burrows, chair of the center’s board of trustees, greet visitors and friends in the Chapel of St. Augustine of Canterbury during a noontime service in mid-December. Photo: Lynette Wilson/Episcopal News Service

Burrows is the bishop of Cashel, Waterford and Lismore with Ossory, Ferns and Leighlin in the Anglican Church of Ireland. On Dec. 13, during the Feast of St. Lucy, Burrows celebrated an Advent service at the center. The Rev. Rhona Dunphy — then a locum, or temporary minister, at St. Andrew’s Church of Scotland in Rome — preached on Matthew 21:28-32, and how humans respond to authority.

“As a minister, for me, it’s very important to hear other people preach and to be part of a worshiping community, as well as leading a worshiping community, and the fact that services are celebrated here during the week — it makes it very easy to do that,” Dunphy told ENS after the service. She has 23 years of experience working in Europe’s ecumenical space, mostly based in Germany. “And it’s exciting to be in a place like Rome and be working with and worshiping with people from other denominations.” 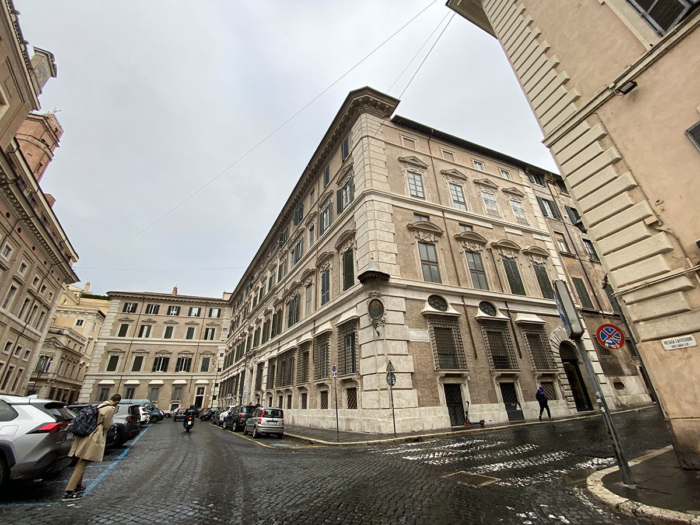 In addition to weekly Tuesday services – open to visitors, tourists and pilgrims – the center hosts a weekly prayer circle attended by ecumenical partners, and it coordinates joint education, mission and ecumenical projects with the Vatican and other partners. It also offers study courses and access to a larger Christian research library, as well as introductory access to other local library collections and universities.

“You can find so many different people from different traditions and backgrounds here,” said Allison Beaty, a doctoral student at the Pontifical Gregorian University, which traces its founding to St. Ignatius of Loyola in 1551. “We have Orthodox … we have many Catholics, some of the Baptists will come, Methodists — there’s just such a great mixture of people that come together and it creates lots of interesting discussions.”

Beaty is a member of the Church of the Nazarene, which emerged in North America in the 19th century out of the Wesleyan-Holiness movement within Methodism. “As a Wesleyan, we feel close to the Anglicans, theologically and in our tradition,” she said. “So I feel comfortable here. I guess I kind of feel like I’m around my big brothers and sisters in a way.”

Creating a space of welcome is of utmost importance to the Rt. Rev. Ian Ernest, the center’s director.

“The calling of this place is to be humble enough to share what we have and to receive from the other, and out of hospitality comes encounter. This place is a place of encounter [for people from different backgrounds]. It’s just a symbol of what the church of Christ is: the diversity of people sharing a common faith, a group of people coming from all walks of life to be able to proclaim together the Good News of our Lord Jesus Christ, or else the Good News won’t be good news,” Ernest, who previously served as the bishop of Mauritius in the Church of the Province in the Indian Ocean, added. 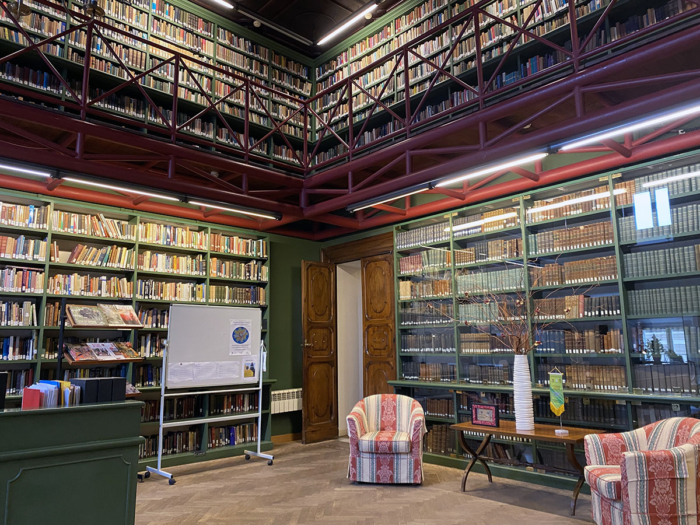 The Rev. Matthew A. Laferty, director of the Methodist Ecumenical Office in Rome, works closely with Ernest on behalf of their respective communions, and on a personal level, they have covenanted to support each other on their ecumenical journeys.

“Even though the largest part of our briefs is working with the Catholic Church in the Holy See, it’s important in our witness of Christian unity to live that out in visible ways with one another,” said Laferty, who has worked in the ecumenical space for over a dozen years and who is a regular at both the Tuesday Eucharist and the Thursday prayer circle.

The Anglican Centre is about more than the unity of Anglicans and Roman Catholics, it pursues a larger ecumenical vision of unity, the Rev. Margaret Rose, ecumenical and religious deputy to the presiding bishop of The Episcopal Church, told ENS.

“Unity among all the churches, mutual recognition of ministry and eucharistic hospitality; being in communion with one another,” she said. “Today’s ecumenical work is about mutual dialogue and coming to a new place together.”

Burrows, the Irish bishop who serves as chair of the board of trustees, has witnessed a shift in the ecumenical movement, at least at home, where sectarianism has historically led to segregation and violence, and he sees how dialogue between leaders can have a positive impact on communities.

“In these days of a receptive ecumenism, we learn more and more from each other’s strengths as we work together,” Burrows said. “The work of the center does trickle down and does make a difference in terms of [local] initiatives.

“I come from a country perhaps more bedeviled by ecumenical difficulties in a previous generation than most countries on the globe. We’ve had a long history of challenging the difficult Anglican-Roman Catholic relationships, and [with] this past generation, everything has been transformed into positivity and vision. And it’s in large measure because of the kinds of conversations and the kinds of trust that emanate from here.”