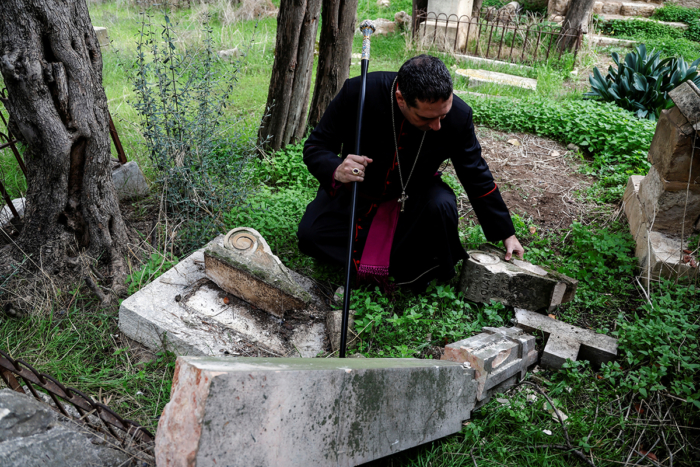 [Episcopal News Service] Presiding Bishop Michael Curry has joined global religious leaders in condemning the desecration of a Christian cemetery in East Jerusalem and expressing his support for Christians in the region, in a letter to the Anglican archbishop in Jerusalem.

“Respect for the sacred places of all of our religious traditions is a cardinal virtue of hospitality for all the children of the God who is the creator of us all. We must learn to love each other as the God who made us all loves us,” Curry said in his Jan. 6 letter to Archbishop Hosam Naoum, Anglican bishop of the Diocese of Jerusalem.

“As we continue to pray for peace in the Holy Land, I stand with Archbishop Hosam Naoum and other Jerusalem church leaders in calling for respect, protection, equality and justice for its Christian community – who are the Living Stones of the church,” Welby said.

The vandalism of more than 30 graves was discovered Jan. 3 at Jerusalem’s Protestant Mount Zion Cemetery. The site is maintained by an Anglican trust largely for Jerusalem’s Anglican and Lutheran communities. Gravestones had been toppled, some of them broken or smashed. Two young men wearing Jewish skullcaps reportedly were seen on security footage carrying out the attack, but no arrests have been announced.

Naoum, in a BBC News report, lamented the attack on the cemetery as reflecting religious tensions in the region and continued threats of persecution against Christians. “This is only an indication that we are not in a place where people can tolerate each other or accept each other,” Naoum said. “We see more exclusion, more segregation and that is what really grieves us in this city of Jerusalem.”

Israel’s foreign ministry also condemned the vandalism. “This immoral act is an affront to religion and the perpetrators should be prosecuted,” it said on Twitter. “Since its establishment, the State of Israel has been committed to freedom of worship and religion for all and will continue this policy.”

The Diocese of Jerusalem issued a statement saying the specific graves targeted by the vandals, including toppled crosses, indicate they were “motivated by religious bigotry and hatred against Christians.” One of the desecrated tombs included a bust of Samuel Gobat, the second bishop of Jerusalem, who died in 1879.

“The Episcopal Diocese of Jerusalem condemns these wanton acts of desecration and calls for the relevant authorities to search for, apprehend and prosecute the perpetrators of these terroristic crimes to the fullest extent of the law, including those laws pertaining to hate crimes,” Naoum said in the diocesan statement.

The cemetery was created in 1848 and lies within the Palestinian territory that was seized by Israel in the 1967 Arab-Israeli war. Jewish extremists have defaced other Christian properties on Mount Zion in recent years, according to the Associated Press.

The leaders of 13 Christian denominations in Jerusalem also released a statement this week in response to the vandalism. “These acts cannot be seen as isolated incidents, but as a clear and systematic attempt to bring about exclusivity in favor of one side,” the leaders said.

They called on world leaders to condemn such attacks “and to actively reaffirm and recommit themselves to the promotion of an environment of safety, mutual respect and religious tolerance in this Holy Land that is held in reverence by all three of the Abrahamic Faiths.”