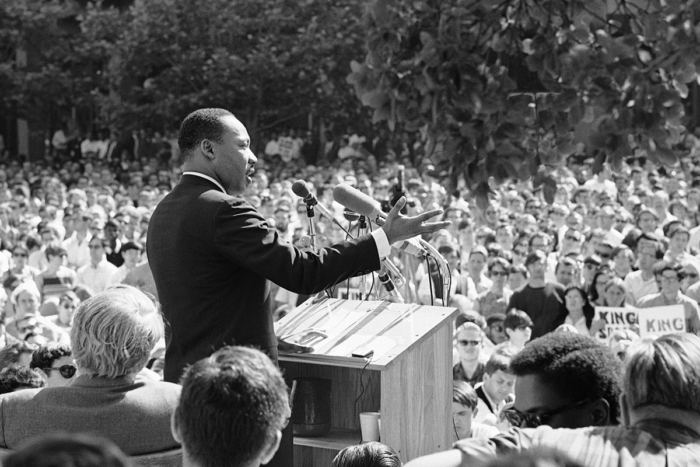 Martin Luther King Jr. speaks to a crowd of about 5,000 outside Sproul Hall at the University of California, Berkley, on May 17, 1967. Photo: Associated Press

[Episcopal News Service] Dioceses and parishes across The Episcopal Church will honor the Rev. Martin Luther King Jr. on the holiday weekend of his birthday, Jan. 14-16, with services and other events both in-person and online.

King, who would have turned 94 this year, spearheaded the national movement for racial justice and civil rights as a Baptist preacher in Montgomery, Alabama, and Atlanta, Georgia. In the last years of his life, he focused more on economic injustice and the Vietnam War. He was assassinated on April 4, 1968, during a trip to Memphis, Tennessee, to support city sanitation workers who were striking for better pay and working conditions. He is honored in The Episcopal Church’s Lesser Feasts and Fasts calendar on April 4.

Here are a few events Episcopalians can participate in. All times are local.

Presiding Bishop Michael Curry will visit Los Angeles, California, to give the keynote address at a “Power of Love” service – connecting King’s message with the Way of Love Curry has promoted – at 3 p.m. on Jan. 15 at Christ the Good Shepherd Episcopal Church. The service will feature music by the Episcopal Chorale and a liturgy planned by the diocesan Program Group on Black Ministries.

In nearby Pasadena, All Saints Episcopal Church will continue its tradition of doing a continuous reading, over eight hours, of King’s speeches, sermons and writings. The event, “Let Freedom Ring,” will be held in the church’s nave on Jan. 16 from 9 a.m. to 5 p.m. Texts will be available in English and in Spanish.

Another tradition continues in Boston, Massachusetts, where the 53rd Annual MLK Jr. Memorial Breakfast will be held on Jan. 16 at 9 a.m. at the Boston Convention and Exhibition Center. In 2020, Curry delivered the keynote address at the event, a collaboration between St. Cyprian’s Episcopal Church and Union United Methodist Church. This year’s keynote speaker is Jelani Cobb, a writer for The New Yorker magazine and the new dean of the Columbia University Graduate School of Journalism.

In Washington, D.C., the National Cathedral will host a special morning Eucharist at 11:15 a.m. on Jan. 15 in honor of King, featuring a sermon from the Rev. Paul Smith, a civil rights veteran and associate of King’s. The service includes music from the Washington Performing Arts’ Children of the Gospel Choir joining cathedral musicians. King preached his last Sunday sermon at the cathedral on March 31, 1968.

Grace Cathedral, seat of the Diocese of California in San Francisco, will host an interfaith evensong service at 3 p.m. on Jan. 15, gathering local and national interfaith leaders around the theme “Freedom, Justice, and Beloved Community.”

The Cathedral of St. John the Divine in New York City will host a “Spiritual Sing for Martin Luther King Jr.” on Jan. 15 at 12:30 p.m. Recognizing the power of African American spirituals in King’s life and work, choral conductor Alice Parker will lead participants in an hour of singing.

In Detroit, Michigan, the city’s largest event honoring King – a celebration, rally and march – starts at St. Matthew’s-St. Joseph’s Episcopal Church at noon on Jan. 16. After two years of virtual events, the celebration returns in person with cultural presentations from social justice advocates, a march and a late afternoon meal. This year’s theme is “Six Decades of Mass Movements: The Struggle Continues.”

Trinity Church Wall Street’s Trinity Retreat Center will host a virtual retreat exploring the themes of King’s final sermon, “Remaining Awake Through a Great Revolution.” The free retreat will take place over five half-hour sessions via the Trinity Retreat Center Facebook page on Friday, Saturday and Sunday. The retreat is free and pre-registration is not required.