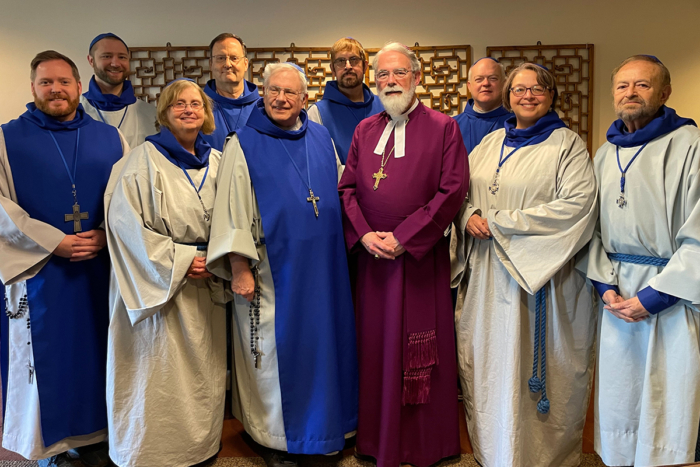 [Episcopal News Service] Monastic orders and Christian communities are commonly referred to as one of the best kept secrets in The Episcopal Church. “I think a lot of people have no idea that we have monks and nuns that live in monasteries, as well as brothers and sisters that are part of our dedicated religious communities,” Franklin Kline, a member of the Anglican Order of Preachers, told Episcopal News Service.

The secret is out. The deep spirituality of these communities was affirmed last year by the 80th General Convention and will be celebrated on Jan. 22, the third Sunday after Epiphany, when Episcopalians across the church mark Religious Life Sunday for the first time. Dioceses and congregations are encouraged to observe Religious Life Sunday by sharing online resources about those communities and by inviting members of religious orders to speak and preach at Sunday services.

Bulletin inserts are available on The Episcopal Church’s website. Other online resources are collected at religiouslifesunday.org, including links to websites maintained by the Conference of Anglican Religious Orders in the Americas and the National Association of Episcopal Christian Communities.

“Our life in Christ is all about community and mutual support. We need companionship along the way to help deepen our relationships with God and to help center our lives in Jesus Christ,” Sister Ellen Francis, OSH, said in an article promoting Religious Life Sunday. Francis is a member of the Order of Saint Helena and vice president of the Conference of Anglican Religious Orders in the Americas.

“For decades, it has been a dream of Episcopal religious communities to have a Sunday of observance and celebration of religious life,” Francis wrote. “You or someone you know may perceive a call to a life in religious vows, and we welcome those who do to enter into discernment conversation with us.”

Kline, of the Anglican Order of Preachers, is helping to organize the Diocese of Missouri’s observation of Religious Life Sunday, starting with an overnight retreat Jan. 20 and 21 at the Marianist Retreat Center in Eureka. Diocesan festivities will include a choral Evensong at Christ Church Cathedral in St. Louis, where Kline worships.

“I think people are looking for something more and deeper in their faith walks, and I think this is a wonderful way to engage in the life of the church,” Kline said.

Members of monastic orders live together under such vows as poverty, chastity and obedience. Similarly, members of Christian communities, though living apart, come together for prayer and formation while agreeing to follow religious vows. The Episcopal Church canonically recognizes 18 monastic orders and 14 Christian communities for men, women or both. Each is defined by a spiritual guideline, or rule of life, and by its commitment to prayer, life in community and hospitality.

Kline, like many Episcopalians, was unaware that the church had such communities, until St. Louis hosted the annual gathering of Anglican Order of Preachers in 2010. He helped accommodate some of the order’s activities at Christ Church Cathedral and found that the community appealed to his desire for “something deeper” in his faith journey.

“I was looking for something more than just attending church,” he said. “It has been very fulfilling.”

The Anglican Order of Preachers is open to clergy and lay men and women and follows the Dominican tradition of prayer, community, study and preaching. Members agree to live lives of simplicity, purity and obedience, Kline said. It has about 150 members in the United States and around the world, from England to South America.

In the Diocese of Chicago, Will White of the Community of the Mother of Jesus is supporting parish observances of Religious Life Sunday across the northern Illinois diocese. White works as director of operations at Church of Our Savior in Chicago and worships on the city’s north side at Church of the Atonement.

“As Christians we feel called by Jesus to something [more] … by the nature of our baptism,” White told ENS. “So really, this community approach, rooted in monastic tradition, is another avenue of exploring vocation.”

Community of the Mother of Jesus, open to all gender identities, is small but growing. It formed in 2011 and now has about a dozen or more members, some but not all of them based in the Chicago area. “Our vows are justice, tenderness, humility and contemplation,” White said. The community’s rule of life is centered on Mary’s relationship with Jesus throughout his life, death and resurrection.

In addition to attending an annual weeklong retreat, members of the Community of the Mother of Jesus pray the rosary and the Daily Office throughout the week, including through an online prayer group. Throughout the year, members also organize events with in-person and online options, sometimes featuring a guest speaker, to engage in spiritual reflection. And members commit to serving the Community of the Mother of Jesus’ mission, to minister to neighbors who are in need.

For this first Religious Life Sunday, White said he primarily is spreading the word to congregations in the Diocese of Chicago, with the hope that such observances will grow in subsequent years.

Religious Life Sunday was established as an annual observance of The Episcopal Church by the 80th General Convention in Resolution B004, which was proposed and endorsed by 14 bishops representing dioceses in California, Georgia, Indiana, New Jersey, New York, North Carolina and Wisconsin. The explanation attached to the resolution noted that monastic orders and Christian communities “have existed in The Episcopal Church since the mid-19th century but are largely unknown by Episcopalians.”

The Conference of Anglican Religious Orders in the Americas was the driving force behind the idea of a Religious Life Sunday, partnering with National Association of Episcopal Christian Communities. Episcopal bishops who have been active in supporting such communities readily agreed to introduce the resolution and secure its passage.

Ultimately, Religious Life Sunday is about raising awareness, White said. “There are people who in their own spiritual life are seeking something deeper,” he said. “My prayer is just that people see the width and breadth of communities that exist in the American church and just start to form relationships.”