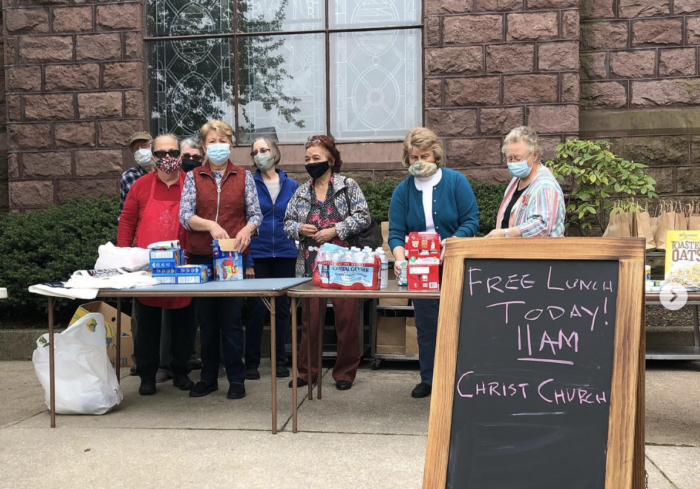 [Episcopal News Service] The Diocese of Pennsylvania and one of its parishes are refusing to back down in their fight against a town government that has attempted to restrict the church’s ministries to homeless and hungry people.

The Pottstown government’s interference in the ministries of local churches started in June 2022, when Christ Episcopal Church and its community partner Mission First were cited for violating the town’s zoning ordinances. The churches’ shared ministries of serving meals, operating an essential goods pantry and providing other services to people in need meant that they did not fit the definition of “church” and could not continue to operate in the downtown area without special zoning variances.

Although negotiations over the summer seemed to move the two sides closer to resolution, tensions have escalated again over the past month, after the town asked Christ Church to notify officials about activities in the building and shut down an overnight shelter at a different church. The diocese and parish are now asking people to contact town officials and urge them to stop their interference in church activities, which they view as a violation of the constitutional right to free expression of religion, and Pennsylvania Bishop Daniel Gutiérrez says he is prepared to bring legal challenges against the town all the way to the U.S. Supreme Court.

“I am profoundly disappointed by the Borough of Pottstown,” Gutiérrez wrote in a statement released Dec. 26. “We have faithfully served our siblings in this community for 200 years. Now, their actions attempt to prevent Christians from living their faith.

“Even more painful is their apparent desire to deny citizens the basics of our common humanity: food, shelter, clothes, and dignity. We will not be dissuaded; we will continue to live into our call as followers of Jesus Christ. Our faith compels us to reach out to people in need.”

The central issue of the dispute is the definition of “church” and the kinds of activities that can happen there under the town’s zoning laws. In citing Christ Church and Mission First in June, the town claimed that ministries to homeless and impoverished people went beyond the normal purpose of a church building, and that they must either cease the ministries or apply for an exception. Christ Church and the diocese filed an appeal, arguing that such work “is the very definition of our faith.”

In August, Christ Church leaders met with town officials to discuss the ministries in greater detail, and on Sept. 1, the town withdrew its previous notice of violation.

However, on Nov. 30, the town issued a cease-and-desist order to The Warming Center, an overnight shelter at St. Paul’s United Church of Christ — the same night that the county declared a “Code Blue” cold weather emergency, according to the diocese. The nonprofit that operated the shelter had previously filed for a special permit to operate. On Dec. 9, the shelter closed, forcing 24 homeless people to leave, the diocese said.

On Dec. 6, town officials sent Christ Church a letter saying it could continue its current ministries since they were “pre-existing,” but asked the church to give the town more information about its activities, in what appears to be a request rather than a legal demand.

“In the future, we would appreciate your ongoing communication and notification if there are any additional uses or significant expansion of the above,” zoning officer Winter Stokes wrote, also asking the church to withdraw its appeal.

“The borough is now trying to force us to tell them the exact days and times when people of need will be in our churches,” Gutiérrez wrote in response. “If this issue goes to the highest court in land, we will go there. We follow Jesus, and his command to us is ‘be not afraid.’”

In the diocese’s statement, the Rev. Joshua Caler, rector of Christ Church, also criticized the town’s involvement in church affairs.

“Government is telling us, in effect, that we need their permission to serve our community in the way our faith requires and in ways we have for generations in Pottstown. We are not a government organization. We are followers of Jesus Christ,” he wrote.