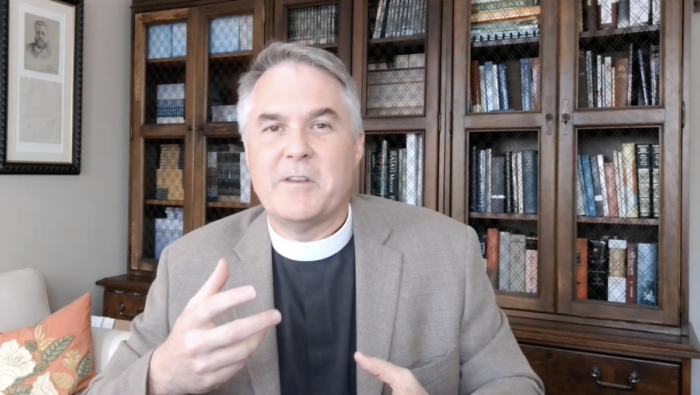 [Episcopal News Service] The Rev. Charlie Holt, who was elected bishop coadjutor of the Diocese of Florida for a second time on Nov. 18 amid an extended controversy over the diocese’s election process, issued a statement to the diocese on Dec. 20 saying he will not impede same-sex marriages or the ordination of gay clergy if he is consecrated.

Holt’s election has been challenged on procedural and ideological grounds since the first electing convention in May. That result was nullified after some delegates filed a formal objection; delegates have also filed an objection to the diocese’s second attempt at an election last month. Some Episcopalians inside and outside the diocese also have criticized Holt’s personal stance against same-sex marriage, arguing such a view has no place in an LGBTQ-affirming church.

Holt sought to allay those concerns in the letter, saying that “all sacraments should be accessible to all people.” Holt reiterated his previous affirmations of General Convention Resolution B012 from 2018, which requires that same-sex marriage liturgies be made available to all Episcopalians in jurisdictions where it is legal but also allows bishops who disagree with same-sex marriage to delegate any required oversight of such marriages to another bishop.

“Marriage in parishes will be a matter of conscience and context, decided by the leadership at each parish,” Holt wrote. “Parishes and rectors in the Diocese of Florida that choose to offer same-gender marriages will be free to do so in accordance with the parameters of the approved liturgies and canons of The Episcopal Church. The pastoral conscience of clergy will be respected across theological difference. No one, progressive or traditional, will be forced, coerced or manipulated to hold or change a matter of conscience.”

A bishop’s oversight is normally not needed for a marriage (though it is in cases involving divorce), but some bishops who oppose same-sex marriage have interpreted B012 differently. Some, like current Florida Bishop John Howard – whom Holt would succeed upon Howard’s upcoming retirement – have forced congregations wishing to conduct same-sex marriages to establish pastoral relationships with other bishops. In his statement, Holt seemed to say that arrangement would not be necessary if he becomes bishop.

“Pastoral care and episcopal oversight of all congregations shall remain with your bishop, and generous pastoral support shall be provided to any clergy and congregations who may request it in keeping with the spirit and intent of 2018 GC Resolution B012,” Holt wrote.

Holt also reiterated his previous commitment to obey the church’s canons prohibiting discrimination in access to ordination based on sex, sexual orientation, marital status and other categories.

“Potential ordinands and candidates for employment will be welcomed into discernment and calling processes based on their gifts and call to ministry without discrimination,” Holt wrote. “We seek ministers who proclaim a life-changing Gospel. Ordination will not be dependent on sexual orientation or political perspective but only on the church’s canonical process of discernment of the mystery of God’s call to sacred orders.”

In addition, Holt wrote of his desire to foster a spirit of unity in a diocese where bitter divisions have spilled out into the open over the past year.

“One of the great gifts of The Episcopal Church is that we have found a way to spread our tent wide enough and make our doors broad enough so that people with diverging views on topics that divide the culture can be truly united and mutually flourish, as one Body in Jesus Christ,” he wrote. “Any inequality of or discrimination against People of Color (POC), LGBTQ+ persons, or any other group in this diocese will be addressed and corrected. … ‘All are welcome’ should be understood to be the hospitality of all our congregations and ministries.”

Holt’s election still faces hurdles. Due to the objection filed by delegates on Nov. 30, the churchwide Court of Review must investigate the objection and write a report; bishops with jurisdiction and standing committees across The Episcopal Church then review that report and decide to issue consent or not.

The objection to the second election in November described the process as “fundamentally unfair” and alleged a material error, disparate treatment of clergy, voter disenfranchisement and a rules violation. The diocese responded to those allegations, saying that although there were “administrative errors,” they did not affect the final outcome.

As with the first objection to the May election, the Diocese of Florida sent the November objection to the office of Presiding Bishop Michael Curry. The Rt. Rev. Todd Ousley, bishop for pastoral development, told Episcopal News Service that Curry referred the objection to the Court of Review on Dec. 19. The court has 30 days to write a report. Then, for Holt’s consecration to move forward, a majority of diocesan standing committees and bishops with jurisdiction must consent to the election within 120 days.