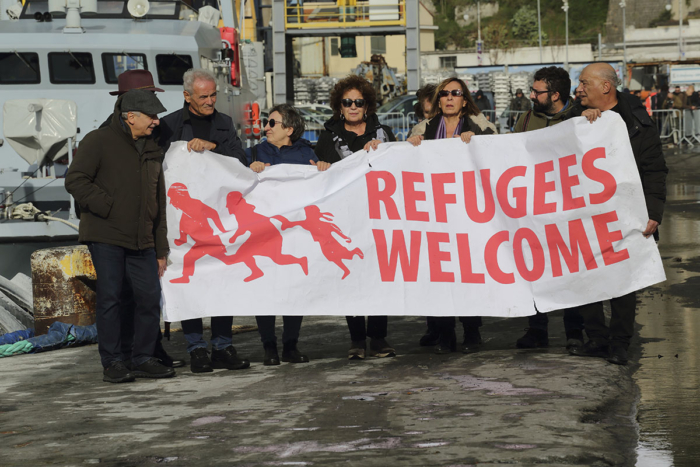 People welcome refugees with banners at the commercial port of Salerno, Italy,  where a ship operated by Doctors Without Borders with 248 people on board, including women and children, arrived on Dec. 11, 2022. Photo: Pasquale Senatore/AP

[Episcopal News Service] Each weekday morning into early afternoon, migrants gather in the crypt of St. Paul’s Within the Walls Episcopal Church in Rome, Italy, where they receive breakfast and shelter from the hot or the cold, depending on the season, as well as language training and legal and other support. Named for its founder, the Joel Nafuma Refugee Center is a ministry that dates to the 1970s.

Click here to offer your support to the JOEL NAFUMA REFUGEE CENTER.

Not unlike the United States, where asylum-seekers and migrants continue to arrive in large numbers, Europe also is a destination point for people fleeing violence and persecution – political instability, civil wars and territorial disputes rage in no less than 20 African, Middle Eastern and southern and central Asian countries and regions. Others flee the effects of climate change, suffer from food insecurity or need to earn money in a global economy with rising living costs and increasing income inequality.

As is the U.S.-Mexico border, Italy, a peninsula in the Mediterranean Sea, close to North Africa, the Middle East and Eastern Europe, is a “hot spot,” or point of first reception for asylum-seekers.

“You have the influx of all of the conflicts around the world, and the instability that’s caused by climate change. … Italy’s geography just happens to be perfect for receiving everyone,” the Rev. Austin Rios, rector of St. Paul’s and the refugee center executive director, told Episcopal News Service. “We’re close to Africa. We’re also close to the overland path. I think the rest of Europe, especially the northern countries, are very pleased to have Italy receiving refugees … and having to deal with the challenges associated with that.” 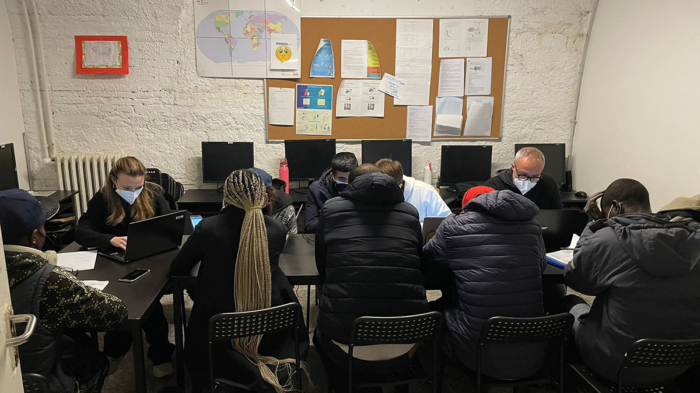 In accordance with the European Commission, when a person pleads for asylum, the country responsible for processing the claim is determined by one of three criteria: immediate family links, which facilitate integration; whether an E.U. country has previously issued the asylum-seeker a visa; or “first country,” meaning the point of first reception, explained Angelica De Carolis, a lawyer and program manager at the Joel Nafuma Refugee Center.

Even though the majority desire to keep moving to wealthier northern European countries, like Germany — which hosts the highest numbers of refugees and migrants — where services and economic prospects are better, De Carolis said 90% are required to stay in Italy, Greece, Spain or Malta, the point of first entry. Across Europe, migration is both a sensitive and highly politicized topic; a promise to expel migrants, adopt stricter asylum rules and secure Italy’s borders led in part to the election earlier this year of Prime Minister Giorgia Meloni, of the right-wing Brothers of Italy party.

During a recent meeting in Geneva, Switzerland, governments, including the United States, pledged $1.53 billion in support of the United Nations High Commissioner for Refugees, the U.N. refugee agency, in its challenge to adequately protect forcibly displaced people, of which there are an estimated 103 million worldwide, the highest number ever recorded.

“These commitments mean that UNHCR will start 2023 with the confidence it can cover 15%of anticipated needs for the year,” the agency said in a press release.

In his most recent letter from Europe, which contextualizes today’s migrant crisis, the Rt. Rev. Mark Edington, bishop of the Convocation of Episcopal Churches in Europe, called out leaders for using the term “displaced people.”

“That’s an anodyne, suitably diplomatic phrase for summarizing the misery and vulnerability of people forced out of their homes by war, famine, climate change, failed states, and the myriad other ways in which hope and safety collapse,” he wrote. 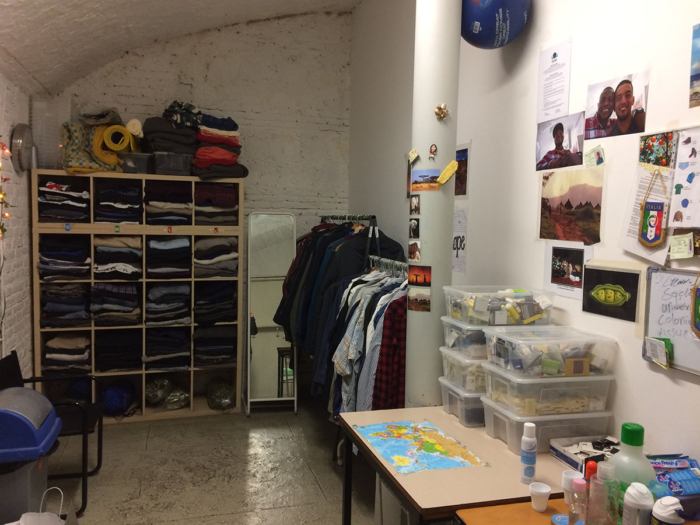 The supply room at the Joel Nafuma Refugee Center where asylum-seekers can find clothing and other essentials they need. Courtesy photo

Joel Nafuma, the center’s namesake, fled the military dictatorship of Idi Amin, who ruled Uganda for a decade; Amin’s brutal regime killed an estimated 300,000 civilians. During this time, Italy adopted a generous and sometimes unregulated “open door” policy toward African migrants who’d been forcibly displaced, and many of them made their way to St. Paul’s Within the Walls because they already had connections with the Anglican churches at home.

Today, migrants and the perilous journeys they make in search of security continue to make headlines worldwide. NGO rescue ships have resumed their life-saving missions in the Mediterranean, after last month Italy refused to allow migrants to leave ships. Four migrants died on Dec. 14 when their boat capsized in the English Channel. They’d set off from France and were trying to reach Britain. At least another 500 migrants have made similar journeys in recent days, Reuters reported.

“Anyone who decides to make this very dangerous trip has been forced,” De Carolis said.

Rios added, “this is not migration by choice.”

As government leaders discuss the challenges of funding and providing adequate protection, NGOs and religious partners work to fill in the gaps. On a $175,000 annual budget entirely dependent on grants and donations, Joel Nafuma Refugee Center staff and volunteers operate the day shelter, providing emergency and long-term assistance to an average of 120 people a day, mostly men but increasingly women and children as well, many of them homeless.

Upon arrival, the majority are without resources and simply trying to live, having suffered additional trauma along the perilous journey, said Giulia Bonoldi, the refugee center’s managing director, who also serves as the Convocation of Episcopal Churches’ chief welcoming officer for refugees and migrants. “We’re dealing with desperate people, helping them to develop the skills to enter the job market.”

Migrants with “regular status,” who are allowed to stay while their political asylum claims are adjudicated, are eligible to work. If a migrant or asylum seeker cannot make a political claim, it’s very difficult to regularize, or legalize, their status, De Carolis explained. Those whose status is irregular are unable to work legally, and this also is a problem for the state, which doesn’t have the resources to expel migrants. About 20% of migrants who pass through the refugee center have irregular status, and the majority of those have political asylum claims.

Migrant abuse made headlines in advance of the 2022 World Cup in Qatar, where over 6,500 migrants, mostly from Pakistan, Bangladesh, Sri Lanka, India and Nepal, died while working to prepare the country to host the wildly popular quadrennial soccer tournament. Generally, however, in Europe, as in the U.S., migrants are essential workers, providing agricultural, service, hospitality and child- and elder-care labor.

Once the migrants find jobs, the challenge is to provide them with the longer-term support necessary to fully integrate. “The overall vision is to welcome people at every stage, from basic assistance to integration, with the goal of helping them to live full, self-directed lives,” Rios said.

The longer-term goal extends beyond the individual, into the community and society at large to change a nativist mindset and how the dominant culture perceives and talks about migrants.

“How do we change the narrative about who refugees are, and what their presence in Italy is,” is the question occupying Rios, he said. “If you don’t get integrated, get the opportunity to exercise agency, you continue to be a second-class citizen.”

Integration is one of the longer-term challenges the Joel Nafuma Refugee Center is beginning to meet in creative ways.

At the parish and community level, it has opened its language classes, Italian, French, Arabic, English and German, to everyone. And with the help of a $54,000 United Thank Offering grant from The Episcopal Church, the refugee center encouraged community residents to embrace diversity and integrate refugees by together caring for parks and public spaces. It’s a step toward inclusion and integration, which is being explored across the Convocation of Episcopal Churches, where Anglican and Episcopal churches in Europe are working with migrants in various ways, with welcoming grants available to facilitate the work.

As he closed his letter, Edington returned to inclusion and to the challenge of providing adequate protection, referring to the Holy Family who sought refuge more than 2,000 years ago.

“Protecting the vulnerable is an abstract idea, until you bring them into your home, or your community. Then it becomes an act of faith and a work of witness, setting the best that is in us against the worst we are capable of,” Edington wrote.

“We can’t extend the protection of inclusion without in some way increasing our own vulnerability– which may be why the real reason that innkeeper turned away a poor, bedraggled family. As the days draw near to Christmas we will be reminded again of that cautionary tale, and challenged once more to make sure it is never said of us.”

–Lynette Wilson is the managing editor of Episcopal News Service. She can be reached at lwilson@episcopalchurch.org.