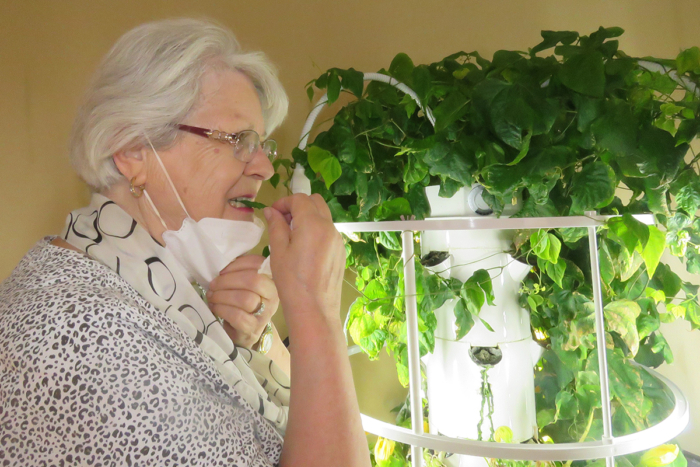 [Episcopal News Service] Sorting onions at the back of Christ Episcopal Church in Teaneck, New Jersey, Susan Shils says she’s not fond of organized religion. But when she rendezvoused with a PTA member to pick up a raffle prize at the church two years ago and saw its food pantry at work, she stayed to help – and kept coming back.

“It raised my spirits in 2020 to know that there was a group of people helping other people,” said Shils, who regularly visits the church to sort and pack groceries for distribution.

The food pantry at the Diocese of Newark church has helped people since opening about 25 years ago, when it fed two to five families a week. Propelled by the COVID-19 pandemic and continuing high inflation, it’s grown considerably. From 2019 through 2022, it will have fed 60,000 people, said the Rev. Michelle White, Christ Church’s vicar.

Now the church is adding hydroponic plant towers in hopes of supplementing the food packages it distributes with homegrown produce, and perhaps spurring new dreams and opportunities in the process.

“We started as a small group in the basement,” recalled Gail Storero, 86, a church member since age 6. From the beginning, the pantry was ecumenical, with donations and volunteers from other churches. Today, Storero is among a diverse crew of volunteers who sort donations and prepare packages of groceries each week. Others arrive on Saturdays to distribute the food.

“I believe in helping others less fortunate,” she said, “and there’s wonderful people working here.”

The ministry has become interfaith, with strong support from the local Orthodox Jewish community – and from those with no faith tradition, who make up a majority of volunteers, White said. “ Jews, Muslims, Sikhs, unaffiliated – there are people who never knew what the inside of a church looked like” until they started volunteering, she said. “For me, this is the ultimate in evangelism: that the people of God are everybody on two legs. We don’t have a lock on God.”

The pantry provides food for everyone who comes, no questions asked.

“Things started ramping up before the shutdown. It was clear that people were having a hard time managing their budgets and getting enough food,” White said. “The development of the pantry mirrored the development of the pandemic. By May [2020], we were probably serving about 150 families a week. Right before the shutdown, it was maybe 20 or 25 families. It just skyrocketed, and so everybody was engaged in a Herculean scramble to get food.”

White began broadcasting the need for donations wherever she could, and people responded. One man arrived from a nearby town with $2,000 in government stimulus money he and his wife had received.

Christ Church moved the pantry from the cramped basement to the back of the nave. The church applied for grants, enabling it to install refrigerators and freezers to offer fresh as well as nonperishable food.

The church’s two new hydroponic towers grow plants in nutrient-rich water instead of soil. White has applied to the Hudson Lutheran Foundation for $15,000 toward adding 10 more towers.

“By springtime, we should be up and running, and it should be absolutely phenomenal,” White said.

In early November, a healthy crop of string beans and vines covered with yellow blossoms and young squash grew from slots in the water-fed towers. Their seeds had sprouted in fibrous wool pods inserted into the slots.

The pantry’s gardeners are learning about adjusting the water’s PH and maintaining the right room temperature.

“It’s a learning process for everybody,” White said, explaining that each plant requires a different water chemistry to thrive. “The chemistry for Swiss chard and kale is similar to the chemistry for zucchini. If I was trying to grow strawberries, I couldn’t grow them with zucchini.”

“This is the kind of stuff that changes people’s lives,” White said. She dreams of ways the hydroponic garden might inspire pantry clients and others. Perhaps they could partner with mentors from a local college. Perhaps young people will start a business growing and selling herbs to Teaneck’s many restaurants. Maybe they could put plant-filled towers in senior centers.

“If we could get five or 10 churches to set up a hydroponic system, they can produce strawberries. We can have Episcopal strawberries all over the place.”

Already, the project has inspired some pantry volunteers. Shils ordered a smaller hydroponic kit as a Hanukkah gift for her brother. Erika Ilgenfritz, a volunteer from Grace Lutheran Church in Teaneck, took a break from sorting groceries to examine the towers and sample a green bean. “I think it’s just wonderful,” she said. “We need to do more of that.”

“That is a marvelous thing because, if you can generate your own food, you’re so much more sustainable,” she said. “It’s a way to get the congregation involved in sustainability and environmental concerns. I’m just amazed at the work of the Holy Spirit, that it grew into this whole thing.”

White sees “so much possibility in this world” with the ability to create that God has given. “Where it will end, I have no idea,” she said. “It’s sort of like a Johnny Appleseed kind of thing. Just throw the seeds. I think that’s pretty much what the Gospel story is.”

The Rev. Sharon Sheridan Hausman is priest-in-residence at St. John’s, Episcopal Church, Boonton, in the Diocese of Newark.