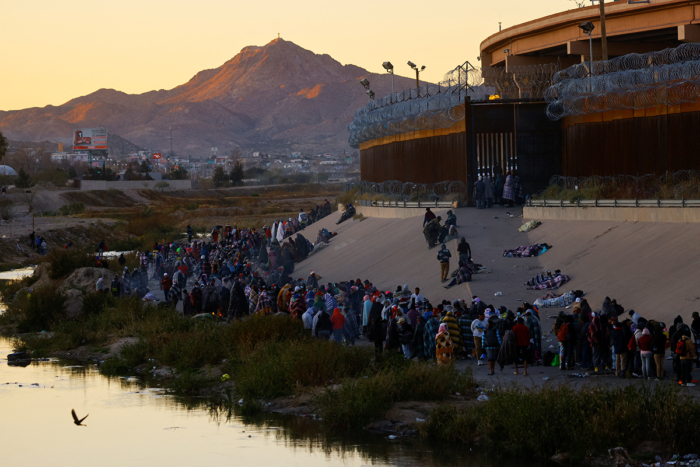 Migrants queue Dec. 14 near the border wall after crossing the Rio Bravo to turn themselves in to U.S. Border Patrol agents and request asylum in El Paso, Texas. Photo: Reuters

[Episcopal News Service] The number of migrants seeking entry into the United States at the border crossing in El Paso, Texas, has grown to thousands a week in recent months, straining immigration enforcement efforts and potentially foreshadowing a new surge after pandemic restrictions known as Title 42 are scheduled to end next week. Over one weekend this month, U.S. Border Patrol reported more than 2,000 daily encounters with migrants in the El Paso sector.

Some asylum-seekers who pass through El Paso stay at a shelter housed at St. Christopher’s Episcopal Church. Since the Diocese of the Rio Grande opened the shelter in March, its staff and volunteers have been focused on a more modest number: 25.

That is the most people the shelter can accommodate at one time, with a new group of migrants arriving there once a week on Mondays. Most of the migrants who stay at the diocese’s shelter come in families. They are fed, clothed, provided with a shower and a place to sleep and offered basic information about the United States and the asylum process. They typically leave the shelter after two or three days, traveling to points around the country to await hearings in their asylum cases.

“They’re with us for enough time to kind of catch their breath, get their bearings and move on to their sponsoring friends or family members,” the Rev. Lee Curtis, canon to the ordinary, told Episcopal News Service. He also leads the diocese’s borderland ministries. 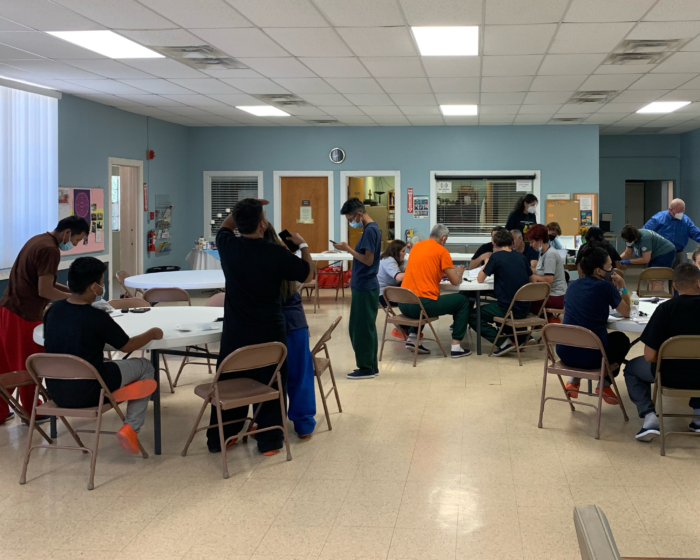 The Title 42 policy, which dates to March 2020 and the beginning of the pandemic, allows immigration authorities to expel some – though not all – groups of migrants trying to cross into the United States, including asylum-seekers. Though enacted on public health grounds, the policy effectively blocks many asylum-seekers from living in the United States, as allowed by U.S. law, while their cases are pending. The Title 42 policy is scheduled to end by court order on Dec. 21.

“Whenever Title 42 is lifted, there is likely, almost certainly, to be a surge,” Doris Meissner of the Migration Policy Institute told NPR earlier this year. “It will, no matter what, be perceived by intending migrants, and most importantly by smugglers, as the time to come.”

That could have a big impact on El Paso, which has seen some of the highest numbers of migrant detentions on the southwest border. More than 50,000 migrants were detained while seeking entry there in October, according to the Border Patrol’s latest monthly figures. Reports this month suggest the number of migrants on the border remains at least as high.

Assisting migrants, especially asylum-seekers, has become an active and prominent ministry of the Episcopal dioceses and congregations along the border, including the dioceses of San Diego, Arizona and West Texas. In El Paso, Curtis said the Diocese of the Rio Grande hosts migrants in St. Christopher’s parish hall and education wing. With additional funding and volunteers, it could double its capacity – by receiving two separates groups of migrant arrivals each week instead of just one.

The Episcopal diocese is part of a coalition of faith groups and nonprofit organizations in and around El Paso that are accommodating the new arrivals. Some of the larger shelters can accommodate up to 200 migrants at a time, Curtis said.

“Many of them haven’t had a hot meal in at least two days,” he said, so providing food and water is a top priority. “We are doing the most that we can do with the resources we have at the moment. We would love to be able to do more, and it really would not take much.”

The Episcopal shelter has one paid staff member, diocesan chaplain Ana Reza, and it needs at least one volunteer on hand to be able to receive each round of migrant guests. Five staff and volunteers would be the ideal staffing level, said Curtis, who has an office at the shelter and helps out when needed. The diocese has an agreement with St. Christopher’s to reimburse the congregation for using the space. The shelter’s work is entirely funded by donations from individuals and congregations.

“We really need folks from around the church, but also around the country to put their attention on places like El Paso,” Curtis said. “We’re trying to welcome these folks with dignity even though we’re already stretched.” 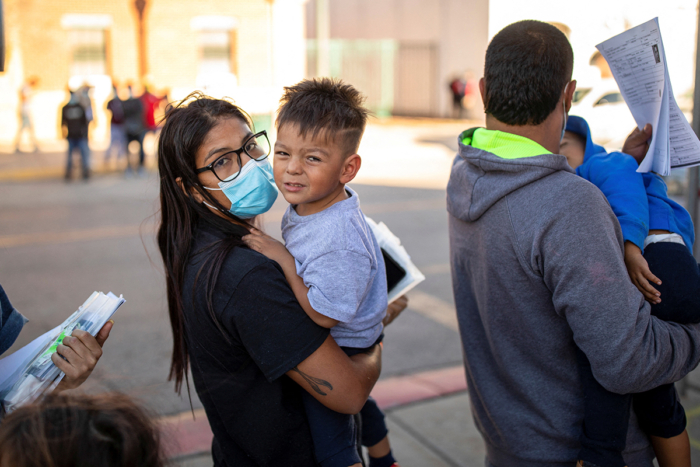 A group of migrants are dropped off Dec. 13 at a shelter run by the Annunciation House in El Paso, Texas. Photo: Reuters

It remains uncertain what the end of the Title 42 policy will mean for El Paso, and Curtis said he and others haven’t ruled out the possibility that legal challenges will delay its termination.

The Trump administration policy was outlined nearly three years ago by the Centers for Disease Control and Prevention, citing provisions in Title 42 of the U.S. Code that allow federal health authorities to bar migrants and asylum-seekers from entering the United States when they pose a risk of spreading a disease – in this case, the coronavirus. Title 42 was created by a 1944 law that was originally intended not to dictate immigration enforcement but to establish a process for responding to national and international health crises.

As a candidate, Joe Biden had vowed to roll back many of then-President Donald Trump’s strict anti-immigration policies that had drawn objections from human rights groups and faith organizations, including The Episcopal Church.

The Episcopal Church’s Washington-based Office of Government Relations “has advocated to end Title 42 because of the harm it has caused to asylum-seekers,” Lindsey Warburton, a policy adviser with the office, told ENS by email. Looking ahead to the scheduled end of the policy next week, “we celebrate that once more vulnerable people will be able to seek asylum at the U.S. border.”

“We recognize this change in policy will have an impact on border communities, and we urge government at all levels to coordinate with and support NGOs on the ground including churches to welcome migrants in an orderly and humane way,” Warburton said.

Border Patrol, an agency of the Department of Homeland Security, has expelled more than 2 million would-be asylum-seekers under Title 42 since the Trump administration enacted the policy. This year, even with Title 42 order still in place, the Biden administration has struggled to respond to an increasing number of migrants seeking entry into the United States.

In April 2022, the CDC announced it was no longer necessary to invoke Title 42 as part of the public health response to the pandemic, and the Biden administration set a target of May 23 to terminate the Trump’s order.

Since then, Title 42 has been the focus of legal action by both critics and supporters. Before the CDC order was set to expire in May, a federal judge in Louisiana ruled in favor of 24 Republican-led states that had sought to maintain Title 42 policies on the border.

Then in November, a U.S. District Court judge in Washington, D.C., ordered the federal government to stop expelling migrants under Title 42, calling the process “arbitrary and capricious.” The judge, however, agreed to stay his order until Dec. 21 to allow the Department of Homeland Security time to prepare for the expected influx of migrants across the border.

Some migrants seeking asylum still are able to gain entry despite the Title 42 restrictions, because the U.S. has strained diplomatic relations with their home countries, such as Nicaragua and Venezuela, and because Mexico will not allow them back on its side of the border. The total number of migrants stopped and expelled by Border Patrol on the southwest border, meanwhile, has tripled during Biden’s tenure, from about 78,000 a month in January 2021 to 230,000 in October 2022.

Breaking!  Over the weekend, the El Paso Sector experienced a major surge in illegal crossings, with a 3-day average of 2,460 daily encounters, primarily through the downtown area of El Paso.  We will continue to keep the public informed as the situation evolves. pic.twitter.com/V2pOO6Y31N

“The numbers are like nothing I’ve seen for the last 25 years,” Blake Barrow, director of the Rescue Mission of El Paso, told The New York Times this week.

Most of the migrants served by the Episcopal shelter in El Paso come from Venezuela and Nicaragua, Curtis said. St. Christopher’s is one of about 20 small churches in the El Paso area that help welcome the new arrivals. Placements at shelters are coordinated by an organization called Annunciation House based on information it receives daily from Customs and Border Protection. The federal agency then arranges transportation for the migrants from detention facilities to the community shelters like the one at St. Christopher’s.