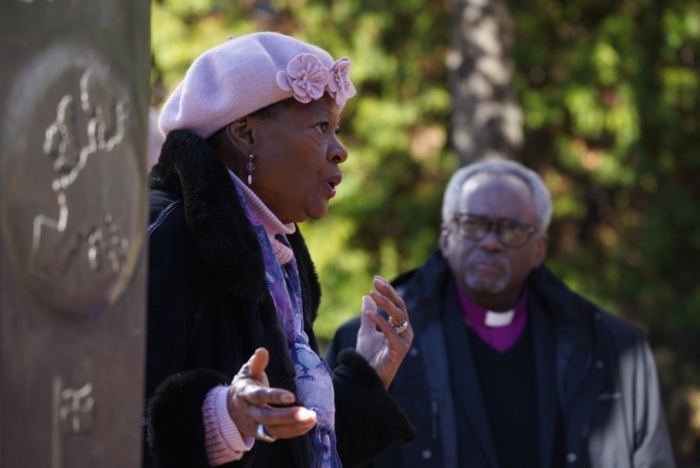 [Episcopal News Service] During a visit to the Diocese of Virginia on Dec. 3, Presiding Bishop Michael Curry learned about a dark chapter in the history of Richmond at the site of a slave jail and market just down the hill from the Virginia Capitol.

Curry was in Virginia to participate in the consecration of the Rt. Rev. E. Mark Stevenson as bishop of the Richmond-based diocese. Curry and Stevenson toured the Lumpkin’s Slave Jail site with some of the people who helped rediscover it, and they learned the story of the long-forgotten “place of horror,” Curry told Episcopal News Service.

They were joined by representatives from the Triangle of Hope, a partnership of three dioceses representing the three points of the trans-Atlantic slave trade: the Diocese of Virginia, the Church of England’s Diocese of Liverpool and the Church of the Province of West Africa’s Diocese of Kumasi in Ghana.

They also visited the Reconciliation Statue several blocks away. Depicting two figures embracing, the statue was erected in 2007 as a commemoration of work done over the preceding decade by civic leaders in Richmond, Liverpool and Benin, West Africa, to understand and apologize for their roles in the slave trade. Two identical castings of the statue are displayed in Liverpool and Cotonou, Benin. 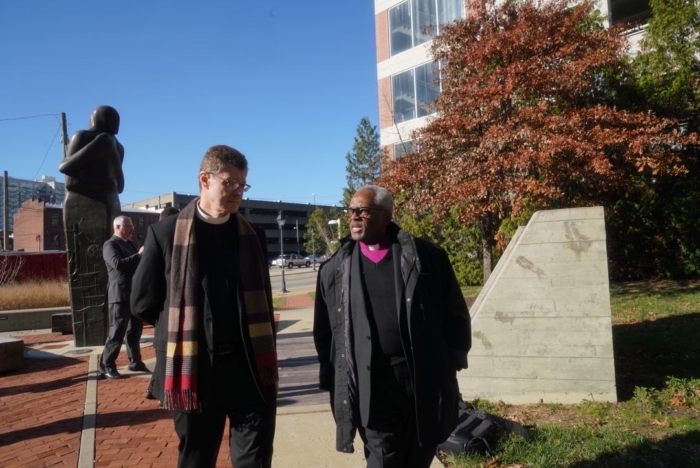 The proximity of the Lumpkin’s Slave Jail site and the statue represent the two halves of slavery’s legacy, Curry said: the truth of suffering and the healing of reconciliation.

“Both the horror and the hope, the powers of hell and the reign of God – the Kingdom of Heaven – are present in the same place. Both must be faced,” Curry told ENS.

Hundreds of enslaved African Americans were tortured, held captive and sold at the site in downtown Richmond run by the notoriously cruel slave trader Robert Lumpkin from the 1840s to the 1860s. Nicknamed “the devil’s half-acre” because of the squalid conditions and horrific treatment that took place there, the complex was visible from the governor’s bedroom window in the executive mansion, the Rev. Benjamin Campbell told ENS. Campbell, who accompanied Curry and Stevenson on their visit, is a Richmond historian and pastoral associate at St. Paul’s Episcopal Church, five blocks from the Lumpkin’s Slave Jail site. 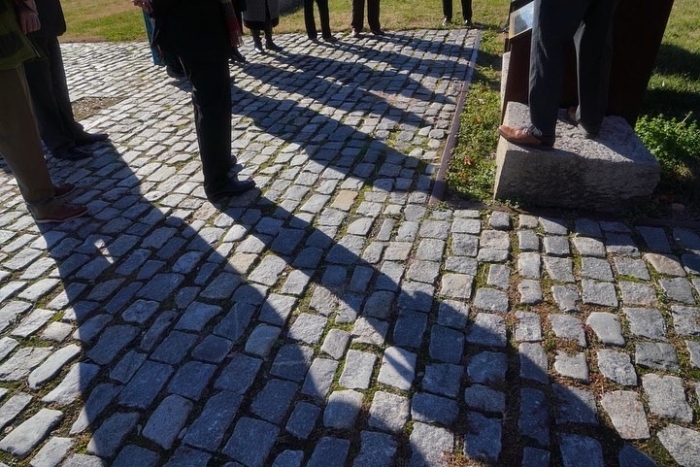 The memorial at the Lumpkin’s Slave Jail site in Richmond, Virginia, reproduces the courtyard of the complex, which was rediscovered and excavated in 2008. Photo: Jay Paul

Though Richmond was the largest slave market on the East Coast for the 20 years preceding the Civil War, that history was largely erased until relatively recently, Campbell said. Campbell serves on the board of the National Slavery Museum Foundation, which has proposed to build a museum at the Lumpkin’s Slave Jail site, and he was involved in the effort to erect the Reconciliation Statue.

Despite the fact that at least 300,000 slaves were shipped through Richmond, making it the second-largest American slave port after New Orleans, Louisiana, the Reconciliation Statue was the first visible reminder of slavery in Richmond in over a century, Campbell told ENS. Lumpkin’s Slave Jail had been razed by the 1880s. Part of the site was later buried by Interstate 95, and part of it was under a parking lot. It wasn’t until the early 2000s that it was rediscovered by archaeologists and researchers who “exposed something that nobody in Virginia knew anything about,” Campbell said. The section under the parking lot was excavated in 2006-2008, exposing building foundations and other remnants of the complex. 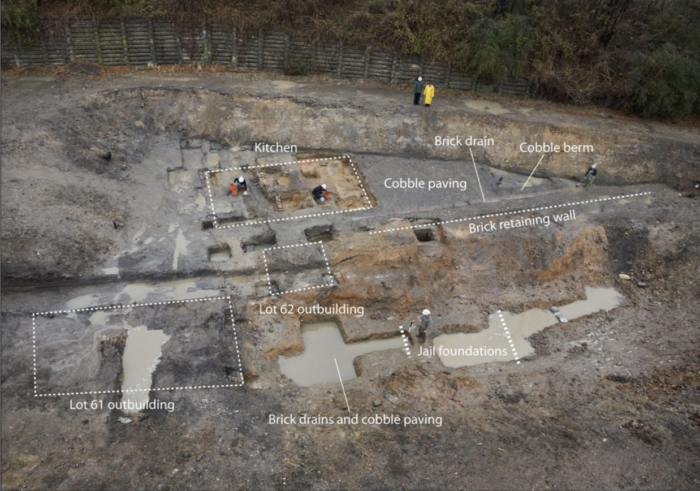 The excavation area at the site of the Lumpkin’s Slave Jail complex in Richmond, Virginia, in December 2009. Photo source: James River Institute for Archaeology via Virginia Department of Historic Resources

The Rev. Delores McQuinn and the Rev. Sylvester Turner, two Baptist pastors, along with Campbell, helped develop the Richmond Slave Trail – which now links the Lumpkin site and the statue. Turner and McQuinn, who is also a member of the Virginia House of Delegates, gave Curry and Stevenson a tour of the sites. They were also joined by Bishop Beverley Mason and the Rev. Malcolm Rogers, representing the Diocese of Liverpool as part of the Triangle of Hope. Representatives from the Diocese of Kumasi also traveled to Richmond for Stevenson’s consecration but did not arrive in time for the tour.

Through the Triangle of Hope, teenagers from the three dioceses learn about the role that their home regions played in the “triangle trade” of slaves and goods between West Africa, America and Europe. Since 2012, groups from each diocese have taken pilgrimages to the other dioceses, establishing bonds through repentance, reconciliation and mission. The group from Virginia will visit Liverpool in the summer of 2023, host other groups in 2024 and go to Kumasi in 2025.

Stevenson designated the Triangle of Hope program to receive the offering at his consecration service – which took place at The Saint Paul’s Baptist Church outside Richmond, because no Episcopal church in the city was large enough.

“Standing on the site of Lumpkin’s Jail, where unspeakable atrocities were committed against thousands of our African American siblings in God, was overwhelming,” Stevenson told ENS. “It’s so important to continue to share this story with young people making the pilgrimage to Richmond, Liverpool and Ghana through the Triangle of Hope.”