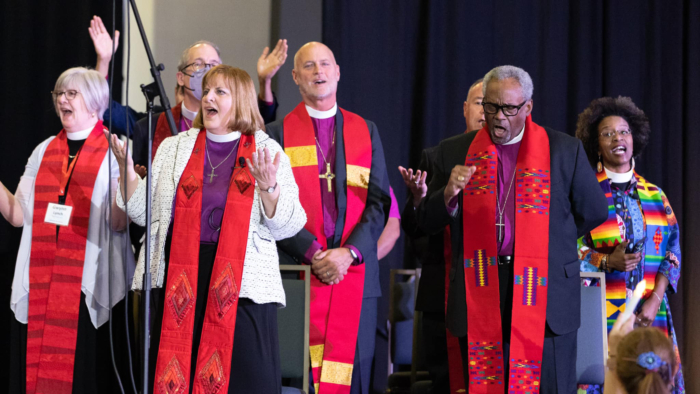 Presiding Bishop Michael Curry joins churchwide and diocesan leaders on Dec. 10 for the Good News Festival, a revival hosted by the Diocese of San Diego. Photo via Facebook

“Love yourself always. Love your neighbor always. Love your God always. Love always, because love made you and love will set you free,” he said in English, accompanied by a Spanish interpreter, at the evening worship service, which concluded the Dec. 9-10 festival.

Curry began leading Episcopal revivals in 2017, but the Good News Festival was the first in-person revival in the churchwide series since the pandemic put a halt in March 2020 to such large gatherings. The events are promoted as part of the church’s “loving, liberating and life-giving” approach to being “the Episcopal branch of the Jesus Movement.”

In his San Diego sermon, Curry invoked the spirit of Christmas: “Allow me to say something about who we are, and about why the shepherds left their flocks, why wise men came from afar, why they followed a star, why the angel choirs started to sing. I got a funny feeling Jesus came to show us the way to live … and that’s why we sing ‘Joy to the World, the Lord has come.’”

The presiding bishop frequently brought the crowd to its feet, including Elliot Nester, 23, who identified as Roman Catholic but said curiosity drew him to experience the revival and Curry’s message of love. “It’s fantastic,” he said, clapping vigorously. “I’ve learned a lot here tonight.”

Similarly, Ashante Smalls said the drive south to San Diego from Ontario, California, was well worth the 226-mile round trip. “I wanted to see the presiding bishop. I just had to take advantage of the opportunity to see him and to hear him.”

The Rev. William Barber II, a nationally known Disciples of Christ pastor and co-chair of the Poor People’s Campaign, to which the Episcopal Church is a partner, had been a featured preacher at the event but was forced to cancel his appearance because of illness. San Diego Bishop Susan Brown Snook announced that Barber had tested positive for COVID-19, and she offered prayers for Barber’s speedy recovery.

The Episcopal Diocese of San Diego counts about 20,000 Episcopalians as members in 44 churches across San Diego, Imperial, southern Riverside counties in Southern California, and Yuma County in Arizona.

Worshippers, waving streamers and dancing, sang along from lyrics displayed on giant screens. During and after the service, stations were available for those who sought prayer.

Music was provided by members of local church choirs, and Snook introduced the Voices of Our City, a choir “of unsheltered or formerly unsheltered people who offer their gifts of songs and music.” The Voices of Our City Choir competed in Season 15 of America’s Got Talent, receiving a golden buzzer from Terry Crews and advancing to the semifinals before being eliminated.

Additional revivals are planned in 2023 in the dioceses of Massachusetts, Southern Virginia, Missouri, East Carolina and Central New York, as well as a revival-inspired event to be held in March at the Cathedral Church of the Holy Trinity in Paris by the Convocation of Episcopal Churches in Europe. Curry’s staff also is finalizing the details of churchwide revival in July 2023 in Baltimore, Maryland, under the banner “It’s All About Love: A Festival for the Jesus Movement.”

A variety of local musicians entertained vendors, shoppers, guests and visitors, at a holiday marketplace, including a jazz acappella  quartet; mariachi bands; the Lucky Lion Dancers and the Matrida Umoja Band, a group of Congolese refugees now living in San Diego.

Curry preached for about 45 minutes. At one point he invited the crowd to join him in a  call-and-response, proclaiming “God is love.” Loving like Jesus means making the decision to seek the good in everyone and in every situation, he said. “If we would love our neighbors as ourselves, we would have a different world.”

“There’s so much to take in, to use in my own ministry,” he said. “I feel fed, wonderfully fed. I wish it wasn’t over.”

Video of the San Diego revival, which lasted about two hours, may be viewed on You Tube.