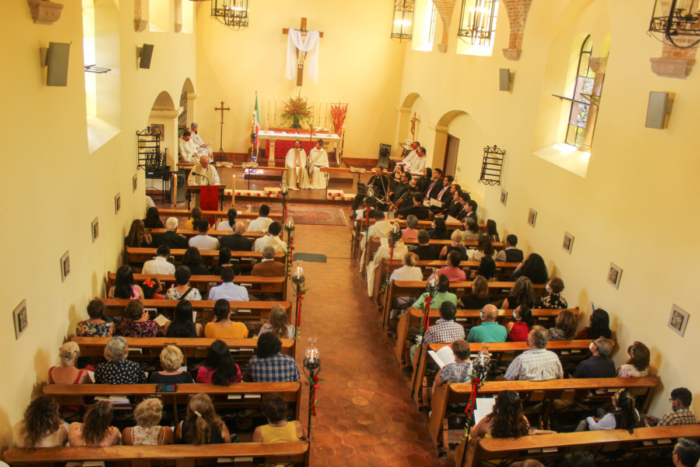 [Episcopal News Service] A growing Anglican parish in Mexico with limited resources is asking Episcopal congregations for their spare hymnals to replace its worn-out ones. Gently used copies of the 1982 Hymnal – perhaps unused extras or copies from closed churches – will help the parish worship without spending its limited funds, the Rev. George Woodward III, rector, told Episcopal News Service.

St. Paul’s Anglican Church/Iglesia San Pablo in San Miguel de Allende, a city of about 62,000 in the highlands of central Mexico, is part of the Diocese of Mexico in La Iglesia Anglicana de Mexico, a province of the Anglican Communion. Woodward is canonically resident in the Episcopal Diocese of Los Angeles.

From its founding in 1965 until Woodward’s arrival in 2018, St. Paul’s was “entirely a gringo parish,” he said, referring to the American and Canadian expats who have settled in San Miguel de Allende since the mid-20th century. Estimates of the American population range from 5 to 10%, but their cultural influence has been significant. Many are retirees, drawn by the year-round temperate climate and historic town center, a UNESCO World Heritage Site.

In recent years – especially since the start of the COVID-19 pandemic, that population has grown, increasing attendance at St. Paul’s.

“We’re a growing parish,” Woodward said. “It used to be comprised of snowbirds who would come down in the winter and Texans who would leave the summer heat. Now there are many more people because of the ability to work either as a digital nomad or permanently abroad, [and those people] have moved here in ever-increasing numbers.”

But it’s also expanded beyond the expats. After his arrival, Woodward began a Spanish Eucharist – in addition to the two English services – which now attracts about 25 people a week, for a total of about 150 attendees every Sunday.

But as it grows, the parish has been increasingly drawing from its reserves in an unsustainable trajectory. With low and inconsistent amounts of donations, St. Paul’s is struggling to meet its $200,000 annual budget. While the native Mexican members “give what they can,” St. Paul’s is “entirely dependent on the foreign component of our congregation,” Woodward said.

The budget crunch is visible in its collection of 1982 Hymnals, which are “falling apart.”

“We’ll have 125 [English-speaking attendees] on Sunday and we just don’t have the hymnals,” Woodward said. With more pressing needs, Woodward decided to reach out through ads and personal requests rather than try to raise more money to buy new ones.

The only concrete offer so far has come from All Saints Cathedral in Albany, New York, where an old friend of Woodward said he would send two boxes of hymnals in early January.

“We’ll probably have 36 extra hymnals, which will be a great help because we have not many hymnals,” Woodward said.

Woodward can be reached at StPaulsRectorSMA@gmail.com.