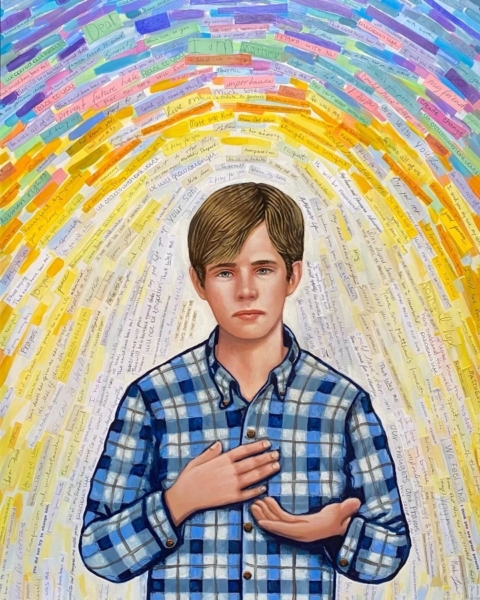 [Episcopal News Service] Washington National Cathedral unveiled a specially commissioned portrait of Matthew Shepard, the gay college student whose 1998 murder sparked a national outcry against homophobic violence, on Dec. 1, which would have been Shepard’s 46th birthday.

The portrait by Episcopal iconographer Kelly Latimore is on display in the cathedral’s crypt, where Shepard’s ashes were interred in 2018, 20 years after his death. Commissioned by LGBTQ+ members of the cathedral staff, it was dedicated with prayer services in the morning and evening that honored Shepard’s life and the transformative cultural legacy of his murder.

Latimore has gained international acclaim for his traditional icons of modern figures from Dietrich Bonhoeffer to Marsha P. Johnson, as well as his paintings that depict the Holy Family as refugees. But this work was different. Working with input from Shepard’s parents, Latimore depicted him without the golden halo used in his icons. Instead, Shepard is surrounded by a multicolored tapestry of written prayers and letters of support that his parents had received over the years.

“I thought, ‘What if that became the [halo] – the thing that’s kind of surrounding and almost holding him there and protecting him?’” Latimore told Episcopal News Service.

While most media stories about Shepard use the same few photos of him in a gray sweater, Shepard’s mother, Judy, gave Latimore different photos to work with. The sweater, Judy Shepard told Latimore, wasn’t even his – he had borrowed it for a photo shoot. In the portrait, Latimore has painted Shepard wearing his favorite shirt: a flannel his parents gave him for Christmas.

“It was their version of Matt, and that’s what meant the most to the cathedral and to me: depicting Matt in a way that they remember and cherish,” Latimore said.

Latimore had been interested in exploring different styles of portraiture, distinct from his traditional icons, connecting to his subject in a more intimate way. But the gesture Shepard makes in the portrait comes from iconography, he said. 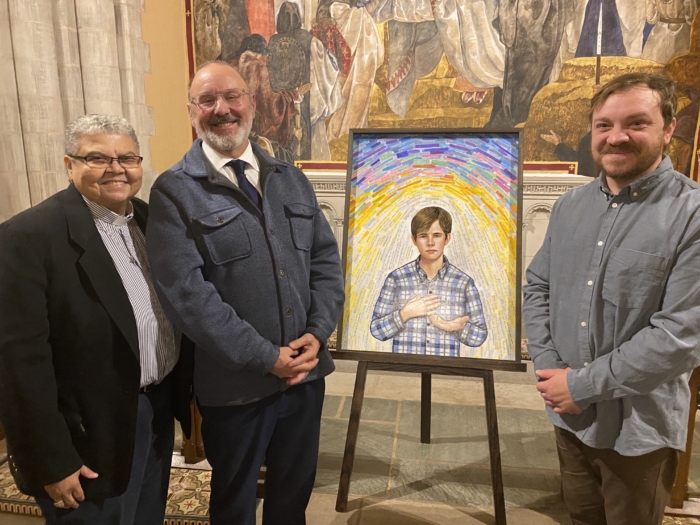 “That hand on the chest was very much a symbol of tenderness and of pain, but also caring for the vulnerable,” Latimore told ENS. “But then his hand extended is almost like a sign that violence against Matt, against the most vulnerable and against LGBTQ people is still happening, but there’s also an extension to the viewer of welcome and care.”

Shepard, an Episcopalian, had often served as an acolyte at St. Mark’s Episcopal Church in Casper, Wyoming, where his funeral would eventually be held. While attending the University of Wyoming, he was involved with the school’s Canterbury Club and a student LGBTQ+ group.

On Oct. 6, 1998, the 21-year-old met two men at a bar in Laramie, and they offered him a ride home. They drove him out to a remote area, where they tortured him, tied him to a fence and left him to die. He died in a Colorado hospital six days later.

His killers told police that while they initially intended to rob Shepard, the attack was prompted by disgust toward his homosexuality. The murder led to wider awareness of violence against LGBTQ+ people and prompted new hate crimes legislation, such as the 2009 federal Shepard/Byrd Hate Crimes Prevention Act.

Shepard’s parents had never selected a permanent resting place for his cremated remains, fearing that any public burial site might be desecrated. The Shepards and the Rt. Rev. Gene Robinson, the former bishop of New Hampshire and first openly gay bishop ordained in the Anglican Communion, worked with the cathedral to inter Shepard’s ashes in the crypt, near where Helen Keller and her teacher Anne Sullivan are laid to rest.

“We’ve given much thought to Matt’s final resting place, and we found the Washington National Cathedral is an ideal choice, as Matt loved The Episcopal Church and felt welcomed by his church in Wyoming,” Judy Shepard said at the time. “For the past 20 years, we have shared Matt’s story with the world. It’s reassuring to know he now will rest in a sacred spot where folks can come to reflect on creating a safer, kinder world.”

The portrait, Latimore said, will be temporarily on view in the crypt before being removed, encased in protective glass, and eventually being put on permanent display.

In his sermon during the Morning Prayer service, Robinson noted that Dec. 1 is also World AIDS Day, marking another source of immense suffering for LGBTQ+ people. (Shepard was HIV-positive.) Robinson also reiterated the enduring threat of anti-LGBTQ+ violence, exemplified by the shooting at a Colorado Springs nightclub that killed five people on Nov. 19-20.

But he also praised the Shepard family’s determination to counter hateful violence with love, especially through the Matthew Shepard Foundation, which offers support to young LGBTQ+ people and lobbies for expanded hate-crime legislation.

“What we have here is very typical of what God does,” Robinson said. “God takes a terrible thing, like Good Friday, and brings something amazing and miraculous out of it, like Easter. … In the end, love wins. It may not look like it right now. The odds may be against it. But our confidence as Christians is that in the end, God gets the last word and that last word is love.”