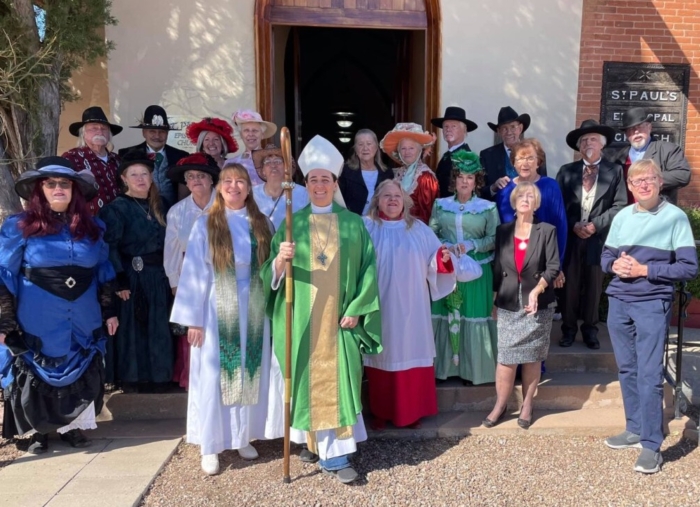 [Episcopal News Service] In Tombstone, Arizona, the spirit of the Old West lives on, embodied in the costumed characters that stroll the dusty streets, the gunfight reenactments – and the Episcopal church that has stood at the corner of Third and Safford streets since 1882. Now the mission church that has witnessed the town’s rise, fall and rebirth is experiencing its own renewal, with its own priest and a campaign to restore its unique bell tower.

St. Paul’s Episcopal Church is a historical rarity in a host of ways. It is the oldest Protestant church building in Arizona, a state with predominantly Roman Catholic heritage from its days as a Spanish territory. It’s also the only Gothic Revival church in the world built with adobe, using handmade bricks covered with stucco and roof beams brought by oxcart from 20 miles away. But it also has elements you wouldn’t expect in a small desert church, like stained glass windows from Belgium and lamps that were sent by ship around South America and then by land from San Francisco, California, according to church leaders.

The church was founded by the Rev. Endicott Peabody, described as a larger-than-life figure who employed some unorthodox fundraising methods. Peabody aggressively sought donations from the miners, gamblers and prostitutes who populated the town, including Wyatt Earp, according to local historian and parishioner Jonathon Donahue. Peabody would challenge locals to boxing matches on the condition that if he won, they had to come to church on Sunday, the Rev. Heather Rose – vicar of St. Paul’s – told Episcopal News Service.

The church has survived earthquakes and desert monsoons over the last 140 years, but its bell tower was destroyed by lightning two years after it was built. The tower, rebuilt in 1887, houses a 450-pound bell from New York, but it has deteriorated so much that the congregation can no longer ring it. The bricks near the top of the tower are only loosely held together with mortar and baling wire, Rose said, and it needs to be redone to make it structurally sound. Otherwise, it could collapse in a strong windstorm or earthquake.

Its unique place in Arizona history got the attention of Arizona Public Media, which aired a segment on the church in early November. Tombstone – which bills itself as “the town too tough to die” – is one of the best-preserved Old West boomtowns. The town, about 75 miles southeast of Tucson, was founded in 1879 by silver miners and its population swelled to at least 15,000 within a few years. Today it is largely dominated by tourist attractions like the infamous O.K. Corral. But St. Paul’s, aside from being a historic landmark, is also a humble gathering place for Episcopalians from miles around, some of whom wear 19th-century garb to services.

“Some of these bigger churches nowadays are all about their choirs and their this and that and everything else,” senior warden Dennis Smith told ENS. “They forget about the little things … It’s just more of a real church that is centered around religion rather than around itself.”

Rose first visited the church in 2017, when she was an insurance claims adjuster who had just moved to the area from Scottsdale. The church was then served by “a revolving door” of part-time and visiting priests. One day, she was standing in the church with the outgoing senior warden when he turned to her and said, “You should be the next senior warden.”

“And then from my left, I heard this voice say, ‘You should be the priest,’” Rose told ENS. “And there was no one standing there, but it felt kind of like a rush of wind. So I felt it was the Holy Spirit … and I thought that odd because I’m an insurance claims adjuster.”

Within a few months, Rose entered a Diocese of Arizona discernment program focused on preparing bivocational priests to serve small, rural congregations. Meanwhile, she began serving St. Paul’s as lay vicar, and after three years, she was ordained a priest in July 2020. She still works part time as an insurance adjuster and lives five minutes from the church.

Average Sunday attendance is about 30 people, “but considering there’s only 1,200 people here in town, that’s not bad. We have a choir now. It’s just growing – it’s just a really nice, small-town parish,” she said.

Over the past year, the congregation has been raising money for the bell tower repairs – about $16,000 of about $56,000 needed for the project, Rose said. The project is still in its early stages, with the church working with the diocese to assess options and complete the restoration, she added.

Smith told ENS he’s confident that the people of Tombstone will come together and give the church the support that it needs, just like they did in the early 1880s.

“We’re steadily working on it, and we’ll get it done,” Smith said.

Correction: An earlier version of this story misstated the distance from Tombstone to Tucson.