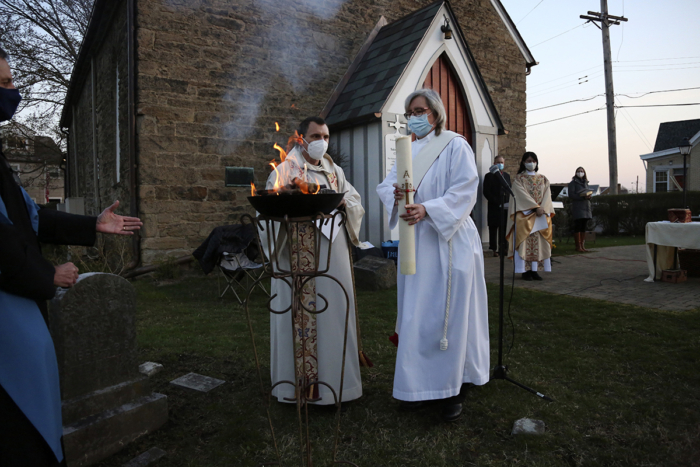 The Rev. Noah Evans helps Deacon Jean Chess light the Paschal candle during St. Paul’s Episcopal Church’s Easter sunrise service in Carnegie, Pa., on April 4, 2021. For many congregants, this was the first in-person worship service they had attended since a coronavirus surge in November 2020. Photo: Associated Press

[Episcopal News Service] The Episcopal Church on Nov. 22 released parochial report data for 2021. The summaries of churchwide membership, attendance and revenue figures offer the fullest statistical picture yet of the unprecedented disruption to parish life caused by the COVID-19 pandemic.

As a one-year snapshot, the release includes some sobering numbers, including a sharp decrease in Sunday attendance during the first full year of the pandemic, when COVID-19 vaccines were just becoming available, subvariants were fueling new outbreaks, some congregations still worshipped only online and many worshipers remained reluctant to gather in person. Churchwide, average Sunday attendance in 2021 barely rose above 300,000, down by 43% from pre-pandemic counts. The 2021 reports offer the first churchwide data on pandemic attendance; the 2020 reports only counted attendance for the first 12 weeks of that year.

Other figures from 2021 leave room for optimism. The number of active baptized members, though down by more than 3% for the second straight year, is nearly in line with recent historical trends, showing a more gradual decline that is mirrored by other mainline Protestant denominations. The pandemic, meanwhile, did not halt the ongoing trend of rising pledges. The average Episcopal pledge increased in 2021 to $3,339, and overall plate and pledge income was up more than 3% for the year.

“The pandemic called us to get real about what matters, and we’ve learned some things that I hope we don’t forget,” Presiding Bishop Michael Curry said in a Nov. 22 interview with Episcopal News Service about the newly released data. “The truth is, we do need human community,” he said, and faith communities are “vitally important” in fostering connection between people.

“We also learned something about the need for something greater than ourselves,” Curry said. “We’re not enough. We’re part of the equation, but we’re not the whole thing. The truth is, we need God.”

For the second straight year the parochial report included narrative questions, intended for congregations to detail a range of ministries and outreach programs, such as racial healing work and anti-poverty efforts, that aren’t fully represented by the annual numbers. And this is the first year the data includes the new category “average weekly online.” That figure, though not meant to be a precise count, reflects the rapid adoption of new technologies across the church during the pandemic to meet the needs of parishioners who didn’t feel comfortable returning to physical worship spaces while the coronavirus continued its spread.

“The Episcopal Church has been tracking church attendance, membership, and related statistics since the early 19th century,” said the Rev. Michael Barlowe, executive officer of General Convention, whose staff collects the parochial report data. “Reviewing this one aspect of the ‘state of the church’ has always been a time for reflection, evaluation, and planning.”

Barlowe told ENS by email that its natural for a time of disruption like the pandemic to be reflected in the latest statistics. The church still faced that disruption in 2021, but “with some experience of adaptation,” he said. “So, while the data indicates some of the same measures of the past, we are also trying out new ways to capture the impact of this adaptation … of new ways of being church and gathering for worship.”

And even as the 2021 data offers “a modest insight” into the church’s response to the pandemic, “we’ll be able to assess that more fully next year, after we review 2022.”

This year, some congregations are experiencing a return to normal parish life, or a “new normal,” that isn’t reflected in the latest parochial report data. “We’re starting to have Sundays that feel like they used to feel,” Dean Nathan LeRud of Trinity Episcopal Cathedral in Portland, Oregon, told ENS earlier this month.

Before the pandemic, the cathedral’s three Sunday services were drawing up to 500 worshipers. Then, in March 2020, in-person services were suspended across The Episcopal Church at the start of the pandemic. Since the initial lockdowns, the cathedral has been among the congregations that have followed widely varying paths and schedules in reopening and resuming many of their former liturgical practices, including in-person services. The recent trend at Trinity Episcopal Cathedral is encouraging: This fall, Sunday attendance sometimes has approached 400.

“Almost certainly it’s going to be different,” LeRud said. “Attendance patterns have shifted for a lot of folks.” Some families still have not yet returned to in-person services and might never come back, he said. At the same time, the cathedral has welcomed many new people, some of whom started attending the cathedral’s online services during the pandemic.

And even if the cathedral doesn’t see 1,000 people turn out for its Christmas and Easter services, as was typical before the pandemic, “there’s nothing in the Gospels that says you have to have 1,000 people in the room to experience God,” LeRud said.

In Columbia, South Carolina, St. Martin’s-in-the-Fields Episcopal Church had a pre-pandemic average Sunday attendance of about 300 at its two Sunday services. During the pandemic, after briefly suspending in-person worship, those services resumed – not inside the church, but outside in the parking lot under a tent. Families sat at a safe distance from each other, within boundaries marked in chalk on the pavement. Patio heaters and fire pits kept them warm.

Those initial pandemic services were small, no more than 50 people, according to the Rev. Mitch Smith, the rector, but the core group of attendees developed a sense of camaraderie, “like, we’re worshiping together no matter what,” Smith told ENS. “And I don’t think that feeling has left. There was a sort of dogged determination that we’re going to make it through this.”

Now, services at St. Martin’s-in-the-Fields are back in the nave and have nearly recovered to pre-pandemic attendance levels. The church also spent about $40,000 to install cameras, microphones and other equipment that are used to livestream the Sunday services, as well as weddings and funerals, for those who still prefer to watch from home.

“It’s absolutely valuable, particularly when we have folks who are homebound,” Smith told ENS.

Other congregations, particularly those with fewer members and resources, have struggled to varying degrees to bounce back from pandemic disruptions. The 2021 fact sheet released by The Episcopal Church indicates the number of U.S. congregations dropped to 6,294, nearly 100 less than the 6,393 that were counted in 2019. Most churches that remain open were small before the pandemic and appear to be even smaller now, with 90% of congregations reporting attendance of 100 or less. Median Sunday attendance plunged to 21 in 2021 after hovering around 50 in recent years.

“To me, 2021 is still an asterisk year, kind of like 2020. A lot of churches were not open for in-person worship,” said the Rev. Chris Rankin-Williams, who chaired the House of Deputies’ Committee on the State of the Church that drafted revisions to the parochial report, including its narrative questions. “I still think reporting on 2022 is going to be the first real indication of how the pandemic has impacted worship and membership.”

Rankin-Williams, in a Nov. 22 interview with ENS, also emphasized that the parochial reports that are submitted annually by congregations and dioceses provide more than a churchwide snapshot of the year. They can be tools for congregations to assess what they’ve done in the past year as they plan for the future, he said. In particular, the qualitative data collected by the narrative questions allows congregational leaders to “share the information that the numbers are never going to show.”

The General Convention Office plans to release an in-depth analysis of the narrative questions in the near future, similar to an analysis completed on the 2020 responses.

The churchwide tallies of baptized members and Sunday attendance have declined nearly every year since 2001, though the rate of decline has held steady for the past two decades, with both metrics decreasing by an average of less than 3% a year; there was even a very slight increase in churchwide attendance in 2011.

Those two decades of decline, however, are a contrast to the preceding decades, when membership and attendance appeared to have stabilized after dropping from their baby boom generation peak in the mid 1960s.

C. Kirk Hadaway, then the church’s director of research, analyzed those trends through 2002 in a 2004 report titled “Is the Episcopal Church Growing (or Declining)?” His conclusion was that it was doing neither but could go in either direction in the future.

“We have reached a plateau of sorts – from which we can slide into a new decline or begin growing again,” Hadaway said. He warned that growth could be difficult “as long as we are a predominantly white denomination with aging, affluent, highly educated members.”

The Episcopal Church remains a predominantly white, aging denomination, though as it seeks to attract new members, it also has attempted in recent years to confront its past complicity in racist systems, offer a greater welcome to LGBTQ+ Christians, diversify its governance bodies and raise up young leaders.

The church’s Nov. 22 news release announcing the 2021 parochial report data also pointed to The Episcopal Church’s participation in a five-year research project led by the Hartford Institution for Religious Research, which that conducted a survey of 38 Christian denominations in summer 2021.

The preliminary findings suggest that the experience of Episcopal congregations is in line with other denominations, which reported large declines in attendance during the pandemic. The persistence of health risks made it difficult for congregations to return to a sense of normalcy, though many were able to respond to the needs of their communities by stepping up service activities.

The pandemic has challenged all faiths, particularly in maintaining worship practices, Curry said. Congregations that are best positioned to thrive in the post-pandemic world are those “that are spiritually vital, where spiritual practices are really being lived out in communities.”