[Diocese of Ohio] The Rev. Anne B. Jolly was elected as bishop coadjutor of the Episcopal Diocese of Ohio during the 206th annual convention on Nov. 19 at the Cleveland Marriott Downtown at Key Tower.

Jolly was elected on the second round of balloting with 68% of clergy votes and 67% of lay votes, receiving a majority of both clergy and lay votes. The election concludes the year-long process of seeking a successor for Bishop Mark Hollingsworth Jr., who began his service in the diocese in 2004. 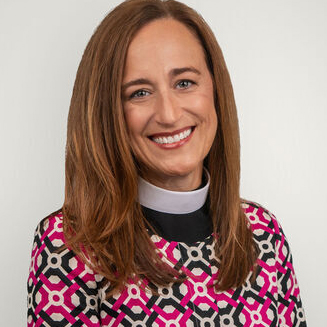 Jolly is the first woman to be elected a bishop in the Diocese of Ohio. She was one of three nominees. The other nominees were the Rev. Elaine Ellis Thomas and the Rev. Diana L. Wilcox, both from the Diocese of Newark.

Currently serving as the rector of St. Gregory’s in Deerfield, Illinois, in the Diocese of Chicago, Jolly said she feels her call is to shape the church so that God’s people are equipped to live lives of faith and share the love and justice of Christ’s “Kin-dom.” As the president of the Standing Committee in the Diocese of Chicago (since 2019), she served as the head of the ecclesiastical authority for two years while the diocese was in an interim period between bishops. She has previously served at Good Shepherd in Austin, Texas; St. Paul’s in Chattanooga, Tennessee; and Christ Church in Greenville, South Carolina.

More about The Rev. Anne B. Jolly

“I’m so excited and overwhelmed and ready to be with you,” Jolly said in addressing the convention. “I want to thank everyone who has held us all in prayer. … I am eager and ready to get there [to Ohio] to get to know you, to listen to you, to help us solidify a vision together about how we can do things and be a part of God’s work in changing the world.”

Pending consent of a majority of the bishops with jurisdiction and the diocesan standing committees, Jolly will be ordained and consecrated on April 29, 2023, at Cleveland Public Auditorium. Presiding Bishop Michael Curry will preside. She will succeed Hollingsworth later next year, becoming the 12th bishop of Ohio.