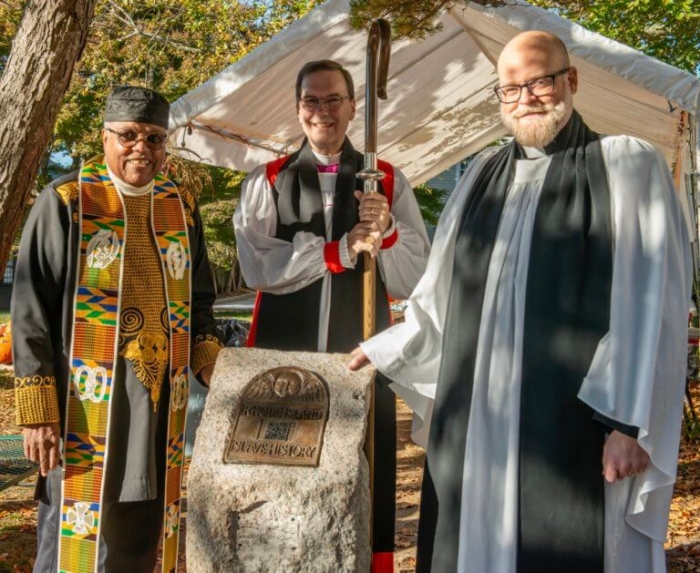 [Episcopal Diocese of Rhode Island] Bishop W. Nicholas Knisely and the Rev. Timothy J. Watt, rector of Trinity Church, Newport, led a service of word and song to mark the dedication of a slave history medallion at the church in late October.

The medallion was installed by the Rhode Island Slave History Medallion project, a statewide effort to promote public awareness of the history of slavery and the slave trade across the state. Trinity is now one of a growing number of sites at which a QR-coded bronze plaque, called a medallion, opens a web page on visitors’ mobile phones explaining the site’s connection to the history of slavery in Rhode Island.

“It’s hard to imagine any industry, any institution, in this state that was here in the early 19th century that in some way was not participating in and receiving monies that were connected with the trade of human beings, both in the United States and in the Caribbean, from insurance industries to loom and textile manufacturers to the church,” Knisely said. “We are all connected to that story. And it is a hard story to hear.

“Sometimes it is hard to face the truth,” he said, “but there is no other way to be free.”

Watt said since Trinity’s vestry approved the placement of the medallion, he had heard from critics who said it went too far and those who said it did not go far enough in acknowledging the church’s participation in the slave trade. But he said it was “a simple historical fact” that Trinity parishioners and several of its early rectors enslaved people or were involved in the trans-Atlantic trade in human beings.

In October 1729, George Berkeley, the eminent philosopher, preached from Trinity’s pulpit in support of the “Yorke-Talbot Opinion,” a joint opinion of the British attorney and solicitor generals that enslaved persons did not become free by virtue of their baptism.

“In other words, ‘Relax, masters, it’s okay to let them be baptized. They’ll still be your slaves,’” Watt said.

Berkeley, who was then a priest and later a bishop in the Church of Ireland, enslaved several people at his nearby farm in Middletown during his few years in Rhode Island. The opinion he defended helped legitimized slavery in Great Britain for decades.

Charles Roberts, the medallion project’s director, told those gathered for the dedication that his organization places medallions at historic sites to make the history of the state’s involvement in the trans-Atlantic slave trade more accessible to the general public. On occasion, he said, people discover they have a personal connection to this history, as had happened to him.

As a child growing up in Newport, Roberts played in the nearby God’s Little Acre colonial graveyard and was taken with the two-shouldered gravestones adorned with an angel’s face that made him feel as though he were playing in “a sea of angels.” There are similar gravestones in Trinity’s own cemetery, he said.

As an adult, he learned that a stone in this style marked the grave of Cuffe Gibbs, who had been enslaved by George Gibbs and later by his son, both of whom were members of Trinity Church. The stone had been carved and signed by Gibbs’ brother, Pompe Stevens, who was enslaved by a local artisan. In signing this one example of his work, Stevens caused later historians to look upon the contributions of Black artisans to colonial era culture with fresh eyes, and also gave evidence that the ties of a Black family had endured despite its members’ enslavement in different households. Stevens’ design is the inspiration for the design of the medallions placed by the project.

“This is living history,” Roberts said. “It doesn’t go away. We are in it. we are part of it.”