[Episcopal News Service] Oklahoma Bishop Poulson Reed has signed on to a statement with other Christian leaders in the state opposing a state court’s decision to set execution dates for 25 prisoners on death row over the next two years.

In an email to the diocese on Nov. 14, Reed noted that he rarely speaks on public policy issues, only doing so when a local matter “has grave implications and can be informed by the teachings of the Bible and The Episcopal Church.”

Reed acknowledged that Oklahoma Episcopalians have a wide range of views on execution and said that while he respects differing opinions, he hopes all will read and engage with it, adding that his position is “not overly partisan, but is deeply grounded in Christian theology.”

The letter Reed signed outlines a Scriptural argument against execution in general, citing passages from Genesis through the Epistles.

“As Christians and Oklahomans, we have grave concerns about this action. Given the current reality of our state’s criminal justice system, our shared convictions regarding the sanctity of human life and the proper function of state power lead us to call for an immediate moratorium on the death penalty in Oklahoma,” the letter reads.

It also includes statistics on the number of wrongfully convicted prisoners who end up on death row, some of whom were exonerated only after their execution. In the last 50 years, 190 former death row prisoners in the U.S. have been exonerated of all charges related to the convictions that landed them there, including 10 in Oklahoma, according to the Death Penalty Information Center.

“As Christians who worship a wrongfully executed Savior, we are confronted with a serious moral query: What is the number of innocent people we are willing to kill in order to maintain our practice of capital punishment?” the letter asks. “We cannot imagine that Jesus would want us to sacrifice even one innocent life to preserve such a system.”

The letter also cites research indicating that people of color are more likely to be executed, “with cases involving white victims ‘significantly more likely to end with a death sentence than cases with nonwhite victims.’” It also counters some of the arguments for execution, such as the assertion that it deters violent crime. The Death Penalty Information Center has compiled studies that refute that assertion. 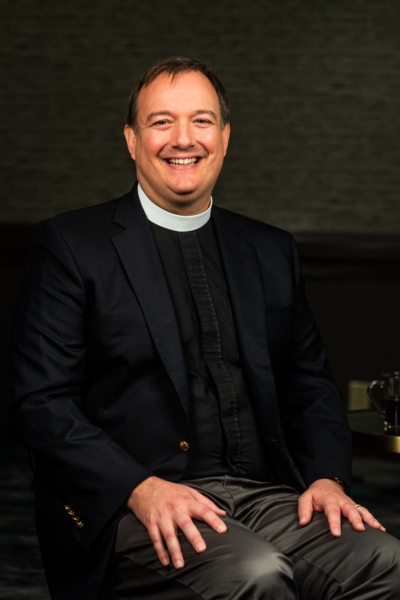 Reed is one of the letter’s 26 initial signers, including Roman Catholic Archbishop Paul Coakley of the Archdiocese of Oklahoma City; Roman Catholic Bishop David Konderla of the Diocese of Tulsa and Eastern Oklahoma; the Rev. Nathan Carr, vicar of St. John’s Episcopal Church in Oklahoma City; pastors from other mainline and evangelical churches; and secular community leaders. It has now amassed dozens of additional signatures from clergy and citizens statewide.

Reed’s predecessor, the Rt. Rev. Ed Konieczny, was appointed a member of the state Pardon and Parole Board by Gov. Kevin Stitt in January 2022 after another member resigned. The board makes recommendations to Stitt on whether prisoners — including those on death row — should have their sentences reduced.

The Oklahoma Court of Criminal Appeals set execution dates for 25 prisoners in July – out of 44 death row inmates – in response to a request from Oklahoma Attorney General John O’Connor in June. The state had paused executions in 2015 after two botched executions drew national attention. Charles Warner, still conscious during his execution, cried out, “My body is on fire.” Clayton Lockett writhed for 43 minutes before dying of a heart attack.

In 2020, the Oklahoma Department of Corrections said it had made changes to the protocols for its three-drug lethal injections “to ensure what happened in the past won’t happen again.” In 2021, the state executed John Marion Grant, who convulsed and vomited before dying.

So far, the state has carried out two of its scheduled executions: James Coddington on Aug. 25 and Brian Cole, who was diagnosed as schizophrenic and was mentally incapacitated, according to his lawyers. Several other death row inmates have made claims of innocence, including Richard Glossip, whose execution has been stayed multiple times due to appeals.

The Episcopal Church first expressed formal opposition to execution at the 1958 General Convention and has called on Episcopalians to urge their state governments to stop the practice. General Convention reaffirmed its opposition in 1979, 1991, 2000, 2015 and 2018, when it called for all death row prisoners to have their sentences reduced. In 2019, when then-Attorney General Bill Barr announced the Trump administration’s intention to execute prisoners for the first time since 2003, the church’s Washington, D.C.-based Office of Government Relations released a statement reiterating the church’s position that “the sacredness of life requires that no individual or group of individuals have the right to unnecessarily take the life of another person.”

“The taking of a human life can be necessary in self-defense and war, but as retribution for even the most heinous crimes it is not justified,” the statement read.