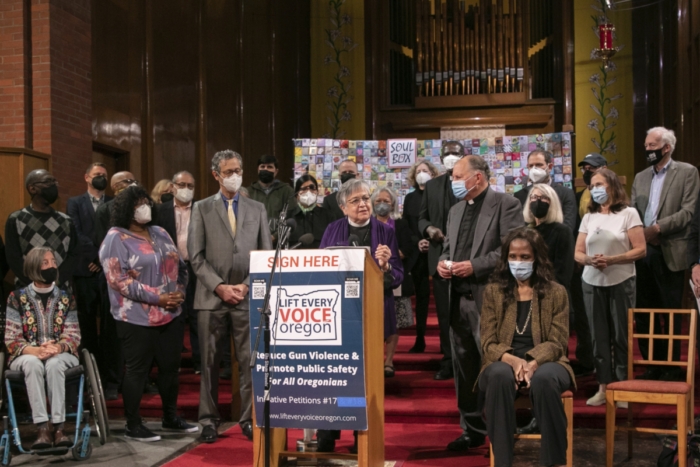 The Rev. Linda Jaramillo, former president of Ecumenical Ministries of Oregon, speaks at a press conference for Lift Every Voice Oregon on May 26, 2022, in Portland, after the Uvalde massacre. Photo: John Rudoff/Sipa via AP

The gun control ballot measure endorsed by the Diocese of Oregon – encompassing the western part of the state – passed narrowly, according to The Oregonian. Votes were still being counted Nov. 11; the most recent tally showed the measure passing 51% to 49%.

“We are called, because of our belief in a God who is loving and life-giving, to hold ourselves accountable regarding the safety and well-being of our communities,” Oregon Bishop Diana Akiyama had said in a statement expressing the diocese’s support. “Too many innocent lives have already been lost because of gun violence. It is our Christian duty to protect the vulnerable. We need to unite around the care and concern for safety in our communities. Requiring permits, a completed background check and limiting the sale of high-capacity magazines are a step in that direction.”

Measure 114 will make Oregon’s gun laws some of the strictest in the U.S., requiring any potential gun purchaser to obtain a permit, pass a gun safety course and undergo a background check. It also bans the sale of ammunition magazines with more than 10 rounds.

The initiative was spearheaded by Lift Every Voice Oregon, an interfaith group dedicated to reducing gun violence that was formed in response to the mass shootings in Orlando and Parkland, Florida, in 2016 and 2018.

“We are celebrating a victory for our children and youth and high school students,” the Rev. Mark Knutson, a chief petitioner of the gun safety initiative, senior pastor of Augustana Lutheran Church in Portland and one of the leaders of Lift Every Voice Oregon, told Religion News Service after the results were announced.

Senior Rabbi Michael Z. Cahana of Congregation Beth Israel in northwest Portland, another chief petitioner, told RNS, “Our role as interfaith leaders was to inspire that belief that we can stand together and change the world for the better.”

The diocese’s annual convention voted to endorse the ballot measure on Oct. 29 in a 242-7 vote, citing the 80th General Convention of The Episcopal Church’s Resolution B006, which urges “dioceses of The Episcopal Church to advocate for safe gun legislation with their state governments,” and other resolutions going back to the 1970s.

“Failing to address the scourge and epidemic of gun violence falls short of our baptismal covenant to respect the dignity of every human being and to strive for justice and peace,” the diocesan resolution supporting the ballot measure read.

In Tennessee, the bishops of the state’s three dioceses had encouraged Episcopalians to vote for a state constitutional amendment that would unequivocally outlaw slavery, with no exception made for criminal punishment. Amendment 3 passed with 80% support on Election Day.

The amendment mirrors a similar effort, supported by The Episcopal Church, to remove such language from the 13th Amendment to the U.S. Constitution that outlaws slavery “except as a punishment for crime whereof the party shall have been duly convicted.”

With the passage of Amendment 3, the state Constitution will now read, “Slavery and involuntary servitude are forever prohibited in this State,” replacing language that allowed enslaving people convicted of crimes.

West Tennessee Bishop Phoebe Roaf, Tennessee Bishop John Bauerschmidt and East Tennessee Bishop Brian Cole had said in a joint statement that they “are all agreed that the effort to pass Amendment 3 … is an important step in righting a historical wrong” and invited members of Episcopal parishes across the state to join them in supporting passage of the amendment.

Stating support or opposition to a ballot measure typically does not fall under legal restrictions that limit churches’ involvement with political campaigns. Churches can lose their tax-exempt status if they “intervene in political campaigns” or use “a substantial part of [their] activity … to influence legislation.”