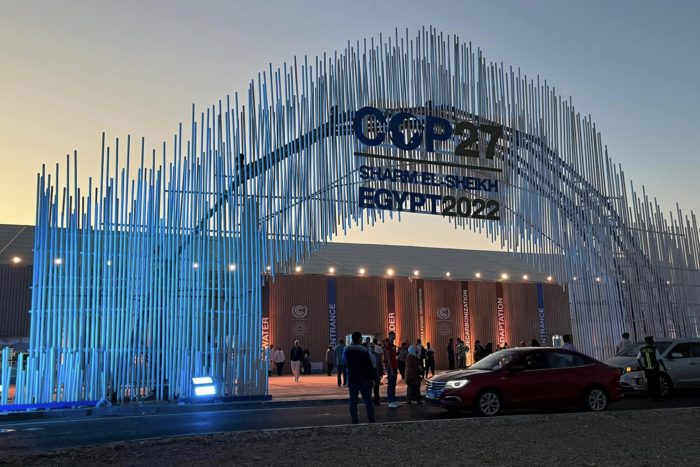 Some members of an Episcopal delegation are attending COP27, which is underway Nov. 6-18 in Sharm el-Sheikh, Egypt. Photo: Lynnaia Main

[Episcopal News Service] For a second year, the United Nations’ annual climate conference has an option for online attendance, which has allowed Presiding Bishop Michael Curry to appoint a larger delegation to represent him at the global summit, and this month, for the first time in three years, some Episcopalians have resumed attending in person.

The 18-member delegation of Episcopalians is now engaged in a mix of online meetings and face-to-face conversations on the sidelines of the COP27 summit underway Nov. 6-18 in Sharm el-Sheikh, Egypt. California Bishop Marc Andrus leads the Episcopal delegation alongside Lynnaia Main, The Episcopal Church’s representative to the United Nations, with additional support from the church’s Offices of Creation Care and Government Relations. Andrus and Main are among six Episcopalians at COP27 in Egypt this week, and they gather online with the entire delegation at the end of each day for a group update.

“I’m just so impressed every day by what they’re learning and how they’re absorbing that and how they’re analyzing it,” Andrus told Episcopal News Service by phone Nov. 10 from Egypt. Andrus, who is retiring as diocesan bishop in 2024, added that the delegates, from dioceses across The Episcopal Church, already are demonstrating a real “sophistication and dedication” in their promotion of policies backed by  General Convention resolutions.

COP27 is known officially as the 27th Conference of the Parties to the United Nations Framework Convention on Climate Change. An Episcopal delegation first attended the summit in 2015, and since 2016, The Episcopal Church has held U.N. observer status, which allows members of the Episcopal delegation to brief U.N. representatives on General Convention’s climate resolutions and to attend meetings in the official zone.

“This is a pivotal moment when global leaders are taking seriously the witness of the American faith community,” the Rev. Melanie Mullen, The Episcopal Church’s director of reconciliation, justice, and creation care, said in a church news release before COP27.  “We are seeking to lead the way in demanding a moral approach to addressing climate change and insisting that the communities that are impacted first and worst by climate change won’t be left behind.”

In addition to Andrus, Main and Mullen, those attending in person this week include Aisha Huertas of the Diocese of Virginia, John Kydd of the Diocese of Olympia and Paloma Pavel of the Diocese of California. Some of them will return home after the first week, allowing others to travel to Egypt for COP27’s second week.

A central purpose of each COP since 2015 has been to track implementation of that year’s landmark Paris Agreement, in which close to 200 countries set voluntary goals aimed at limiting global warming below 2 degrees Celsius above preindustrial levels, settling on 1.5-degree target. At the time, the goal was meant to mitigate the catastrophic effects of warming temperatures on the Earth’s surface, which causes melting glaciers; rising sea levels; and more frequent and extreme hurricanes, droughts, snowstorms and wildfires. Since then, climate scientists have a warned that climate change’s threat to humanity is at a “code red,” as warming gets closer to the 1.5-degree threshold.

The United States once was the largest producer of greenhouse gases. It now ranks second worldwide to China. In 2009, the U.S., China and other developed countries pledged to increase their financial support for developing nations’ efforts to tackle climate change. So far, they have fallen short of their goal of providing $100 billion a year.

The core theme of COP27 is “loss and damage,” which highlights questions of how to respond to – and possibly compensate – people and communities whose lives have been upended by climate change.

“Loss and damage can no longer be swept under the rug. It is a moral imperative,” U.N. Secretary General António Guterres said Nov. 7 in his opening remarks at COP27. “Those who contributed least to the climate crisis are reaping the whirlwind sown by others. Many are blindsided by impacts for which they had no warning or means of preparation.”

During Curry’s primacy, The Episcopal Church’s three top priorities have been racial reconciliation, evangelism and creation care. General Convention has passed numerous resolutions on the issue, whether supporting federal climate action or pledging to mitigate the church’s own impact on the environment. Through its Washington, D.C.-based Office of Governmental Relations and the Episcopal Public Policy Network, the church has advocated for government policies in line with General Convention stances on climate change.

In its latest action, the 80th General Convention approved a resolution in July reaffirming the church’s support for delegates to participate in the climate conference and its engagement with member nations on ways to address climate change and seek environmental justice.

General Convention has not yet taken a stance on the financial remedies to loss and damage, Andrus said, but the Episcopal Church has offered unequivocal support for those suffering the effects a warming planet, intensifying weather systems and rising sea levels.

“It’s been a looming and growing debate at the climate summits as to what’s the responsibility of the world to the communities that are facing frontline loss and damage,” Andrus said. The church continues to show “solidarity with vulnerable populations.”

This year’s conference also comes after the church’s House of Bishops in July approved a “mind of the house” statement, advocated by Andrus, stressing that climate change is an underlying factor in many of the challenges facing societies around the world.

“As people of faith, we are not without hope, but the sustainability of God’s creation demands our action,” the bishops said. “Confronting climate change and environmental degradation has never been more urgent. As members of The Episcopal Church, we are committed in baptism to resist evil, seek God’s will, treat all people with dignity, and strive for justice and peace. Living into these promises, we must face the climate crisis for the sake of love of God and neighbor.”

The Episcopal delegation at COP27 drafted a letter that it is conveying to member states during the summit. The issues raised include the need to accelerate global efforts to reduce emissions while protecting the human rights of those most vulnerable to the effects of climate change.

In-person delegates also are scheduling meetings with world leaders when possible. On Nov. 10 Andrus was joined by Anglican Archbishop Samy Fazwy of the Egypt-based Province of Alexandria and Archbishop Julio Murray of the Anglican Church in Central American for a meeting with Uganda Prime Minister Robinah Nabbanja.

“We wanted to hear what are her priorities, and she talked about tree-planting and water quality,” Andrus said. “We had things to say to that.” The Episcopal Church has been a vocal advocate on water quality issues, he said, while in early August, Anglican bishops from across the Anglican Community participated in the dedication of the Communion Forest initiative in London, England, during the bishops’ Lambeth Conference.

Members of the Episcopal delegation will report back to the church about their experiences at COP27 in an online session at noon Eastern Nov. 30. Anyone interested in attending is invited to register in advance.