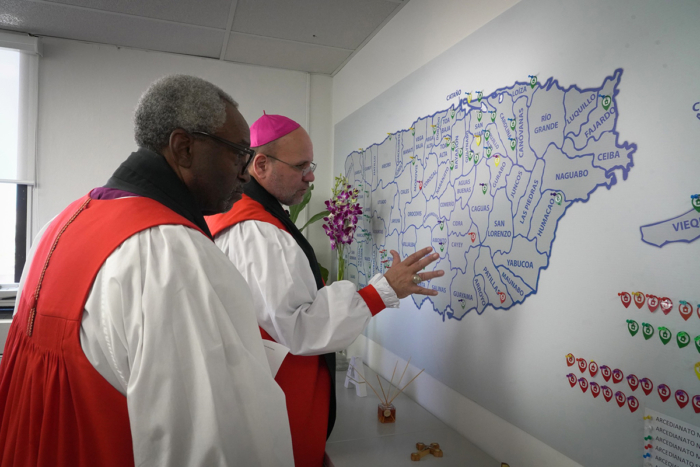 Puerto Rico Bishop Rafael Morales Maldonado, right, shows Presiding Bishop Michael Curry around some of the diocese’s facilities during Curry’s visit to the territory on Nov. 8. Photo: Diocese of Puerto Rico, via Facebook

[Episcopal News Service] Presiding Bishop Michael Curry is in Puerto Rico this week as The Episcopal Church celebrates 150 years of Anglicanism on the island.

“We are here to give God thanks for all that God is doing here in the Episcopal Diocese of Puerto Rico,” Curry said Nov. 8 during Morning Prayer at the Cathedral of St. John the Baptist in San Juan. At the service, Curry joined in a rededication of the cathedral. He also is scheduled to visit the diocesan center and radio station and preach at Holy Eucharist later in the day in Gurabo.

“It’s good to be here,” he said at the cathedral.

Puerto Rico, now a U.S. territory, was under Spanish rule and predominantly Roman Catholic in 1872 when the Anglican bishop of Antigua was granted permission to begin holding Protestant worship services in Ponce, a large city on the southern coast of the island. The first Anglican church, Holy Trinity, was founded there, initially catering to expats.

Antigua Bishop William Waldron Jackson, in a letter describing early Anglican ministry in Puerto Rico, quoted a local priest on how well-received the first services were.

“I shall never forget the attention which was shown by the whole congregation during the services and sermon, or the feeling of joy and thankfulness which was exhibited at the conclusion of the service, when I left the desk,” the priest said. “Some actually embraced me; and one old English gentleman threw his arms around me and sobbed like a child.”

The United States took control of Puerto Rico through its 1898 war with Spain, and the Anglican presence there became a diocese of the U.S.-based Episcopal Church. General Convention allowed the diocese to separate from the church in 1979, but it was readmitted as part of the church’s Province IX in 2003. This year, by approval of the 80th General Convention, the Diocese of Puerto Rico transferred to the church’s Province II, which includes other dioceses in the Caribbean and dioceses in New York and New Jersey.

“We give thanks to God … for our 150 years,” Bishop Rafael Morales Maldonado said in a Facebook post inviting Episcopalians to the Nov. 8 celebrations.

Curry also traveled Puerto Rico in January 2018 on a pastoral visit months after Hurricane Maria devastated the island. His current visit comes as Puerto Rico is recovering from another powerful storm, Hurricane Fiona, which swiped the southwest corner of the island in September, causing widespread power outages and catastrophic flooding.