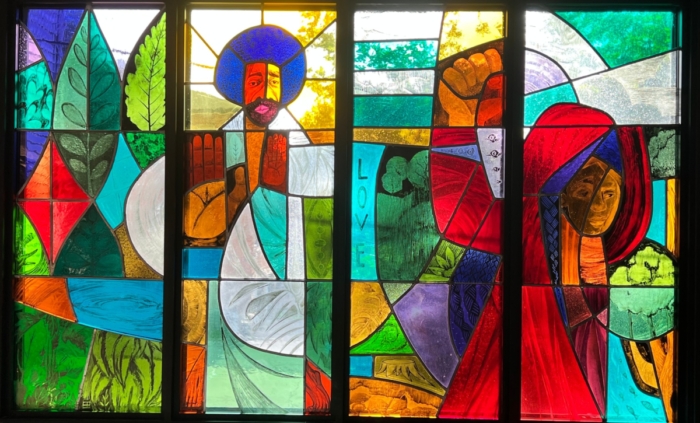 [Episcopal News Service] A Missouri church whose stained glass windows reflect disputed racial representations of historical Christianity and don’t reflect the current makeup of the parish is commissioning a new set of windows depicting Jesus and other biblical figures as people of color.

The Episcopal Church of the Holy Communion in University City, Missouri, a suburb of St. Louis, was built in 1950. Limited to white people until it was integrated in the 1960s, the parish is now about 40% Black and one of the more diverse Episcopal churches in Missouri, said the Rev. Mike Angell, rector since 2015.

Like nearly all American churches, it has stained glass windows depicting Jesus as a white man apparently of European descent. There are no plans to replace those two large windows at the Church of the Holy Communion, though there is increasing debate in America over the ethical implications of depicting a Middle Eastern man as white.

But in addition to other windows depicting saints and biblical scenes in the nave, there is a bank of windows in a smaller chapel off to the side of the nave that have long been “unpopular,” Angell told Episcopal News Service. Angell described them as generic images – common in churches of this era – of “this white male priest, very 1950s-looking, doing different sacramental actions.” In the 21st century, they seemed out of place in a church that welcomes people of color and female priests.

In 2016 and 2017, the parish began a capital campaign, spurred by the need to repair major infrastructure, like the boiler and organ. During the parish-wide discernment process, the question of whether the building reflected the parish’s values of diversity and antiracism came up.

“As the vestry got talking about the capital campaign, we got talking about possibilities; how do we do this in ways that isn’t just about fixing what’s broken but is about incarnating our values, living into our values?” Angell said. “The organ kind of lends itself to that, but really, the stained glass was a big piece of that.”

To commission designs for four new windows, Angell reached out to Cbabi Bayoc, an artist renowned in the St. Louis area and beyond for his paintings and murals. Bayoc says he paints “the world that I want to see my children and yours thrive in,” often focusing on Black parenthood and family life. His body of work includes the cover art for Prince’s 2001 album “The Rainbow Children” and the illustrations for Ibram X. Kendi’s new children’s book, “Goodnight Racism.”

Angell and many parishioners were familiar with Bayoc’s work; a few collected it and knew him personally. However, Bayoc had never designed a stained glass window before. Fortunately, one of the oldest stained glass studios in the United States, Emil Frei and Associates, has been operating in St. Louis since 1898. It was a first for the studio as well; according to Angell, they had never worked with a Black artist before.

“I went up to Emil Frei to practice and play around with the medium,” Bayoc told ENS. “Once I kind of figured out what it was I was doing, it kind of reminded me of drawing. So of course there were some other elements in there, but some of the things I had to do, I was familiar with, so it felt nice to take a change from painting and do something else that I enjoy.”

Bayoc, who describes himself as a nondenominational Christian, had never done explicitly religious work before. A parish committee came up with four scenes that they thought could highlight the parish’s diversity through biblical stories: Joseph and his coat of many colors; the Exodus through the Red Sea; Ruth and Naomi; and Jesus appearing to Mary Magdalene after the Resurrection.

Only one has been completed so far: “Rise Up,” the last panel. In it, Jesus and Mary Magdalene are depicted as Black – Jesus with an afro hairstyle and Mary with a raised fist, an iconic image of Black liberation and a motif in Bayoc’s work.

Between COVID-19 and scheduling difficulties, the window took about three years from design to completion and cost about $13,000, according to Angell. The funding for the window was part of the larger capital campaign.

Seeing the window in place, Bayoc was struck by how the shifting natural light changes its appearance; in the studio, he had been looking at glass backlit by white light.

“Every now and then, I held a piece against a natural-light window, but it still didn’t prepare you for seeing the sky and the trees and all that behind the window,” he said.

Bayoc has done illustrations for the remaining three windows, but the funding and timeline are not yet settled. Angell said a number of donors have expressed interest, but the studio is so busy that they haven’t been able to develop a contract yet.

In the meantime, “Rise Up” has gotten positive feedback from parishioners and visitors.

“It’s been really embraced. It’s amazing how often, after services, there are people [looking at it]. We’ve had people visit the church just to visit the stained glass,” Angell said.