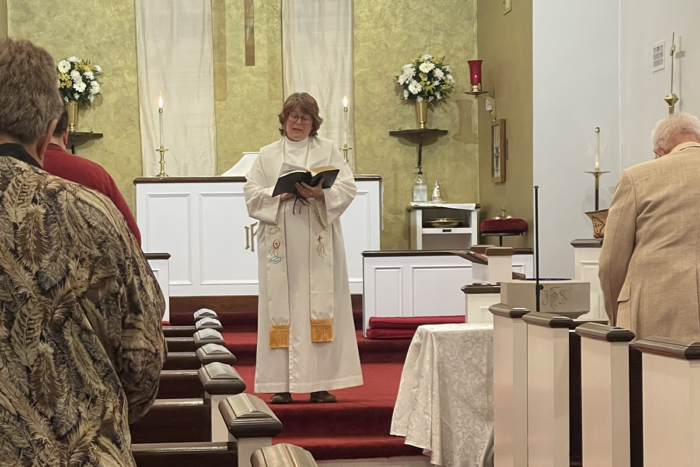 The Rev. Annette Joseph leads an All Saints’ Day service on Nov. 1 at St. Paul’s Episcopal Church in Sikeston, Missouri. Unclaimed cremated remains from a local funeral home were placed on a table in front of the altar for prayers and blessings. Photo: Cody Caudle

[Episcopal News Service] For its All Saints’ Day service on Nov. 1, St. Paul’s Episcopal Church in Sikeston, Missouri, invited the community to join in paying final respects to a small group of deceased individuals who never received proper funerals. Their cremated remains have sat on funeral home shelves for more than a year – unclaimed and presumably forgotten.

They are forgotten no more.

“It just made sense that people who haven’t had any funeral done for them or any memorial service are now getting one,” the Rev. Annette Joseph told Episcopal News Service in describing the origins of the service for unclaimed remains, which likely will become an annual service at St. Paul’s.

There are any number of reasons why cremated remains go unclaimed at funeral homes. The deceased might only be survived by distant relatives, or if family members have unpaid funeral bills, they might not feel comfortable coming to claim the ashes. Some relatives might simply not want to deal with disposing of the ashes, said Cody Caudle, one of several Sikeston funeral home directors invited to present unclaimed remains for prayers and blessings at the Nov. 1 service.

Caudle, co-owner of Ponder Funeral Home, told ENS that he would never withhold ashes from a family member for any reason, even unpaid bills, but several remains still go unclaimed each year at his funeral home. Missouri law requires funeral homes to wait at least 90 days before disposing of unclaimed remains, he said, though his funeral home typically holds the remains for at least a year while trying to contact family members.

He presented the unclaimed ashes of three people who died in 2020 for the service at St. Paul’s.

“I thought the service was really good as far as actually doing something for people that have kind of been forgotten,” Caudle said. “It was a great idea.”

Joseph, who serves two congregations in southeast Missouri as a regional missioner for the Diocese of Missouri, said the idea for the service was raised during a brainstorming session among St. Paul’s leaders in response to a prompt by Bishop Deon Johnson. The diocese recorded an unexpected budget surplus in 2021, and in February 2022, its Diocesan Council voted to pass some of that money on to its congregations, each of which received $1,000 to fund community outreach projects.

“Be creative in how you use the funds,” Johnson said in a message to the diocese. He encouraged congregations to look for ways to make an impact in the community, to seed new ministries or to collaborate with other congregations.

Discussions at St. Paul’s generated a number of ideas, including the service to bless unclaimed remains. The congregation ultimately decided to use its $1,000 to expand fencing around part of its property, to serve as a play area for a day care center that was invited to use space in the congregation’s buildings.

The congregation still decided to pursue the idea of a memorial service, which cost nothing to plan, and Joseph began reaching out to local funeral homes. The idea has resonated within the congregation and among the funeral homes, Joseph said, as a way of offering a solemn goodbye to people who “had no one who’s remembered them.”

Nearly 15 people attended the service Nov. 1. For the liturgy, Joseph followed the lectionary for All Saints’ Day, while adding some of the rite for Burial of the Dead in the Book of Common Prayer.

The congregation also is looking for ways to help find a final resting place for the unclaimed remains. St. Paul’s, which charges $500 for space in its columbarium, might be able to absorb some of that cost to make room for the ashes. At the same time, some parishioners have offered space in family plots at a local cemetery, though someone would need to pay the cemetery’s interment fees.

At Ponder Funeral Home, ashes that aren’t claimed after a year typically are buried in a flower garden around a flagpole at the business, though Caudle said he would gladly work with St. Paul’s on a more meaningful solution.

The deceased don’t always leave an indication of what their faith beliefs were, but Caudle thinks everyone deserves to be memorialized in some way. “I believe that everybody, no matter who you are, you’re still one of God’s children,” he said.