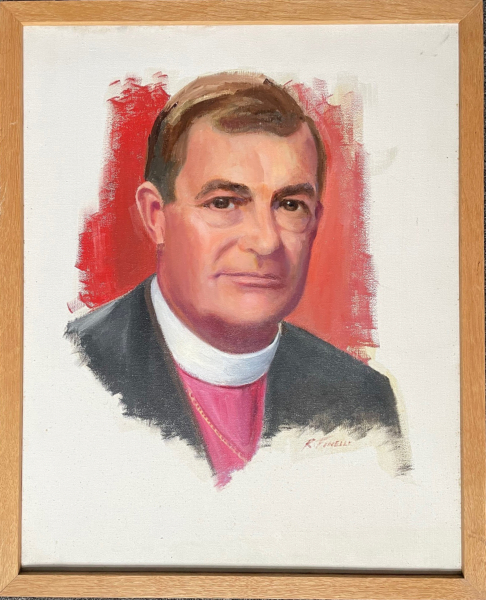 Hunt served as bishop of Rhode Island from 1980 to 1994, immersing himself in challenging issues roiling the state and the church, and urging parishes in the diocese to intensify their outreach to people in need.

“I think he will be most remembered for his commitment to issues around social justice and his support for Abrahamic dialog among Jews, Christians and Muslims,” said the Rev. David Ames, the longtime Episcopal chaplain at Brown University who is now retired. “He was compassionate. He was very interested in planning, so he developed his ministry with a clear sense of direction.”

During his episcopacy Hunt campaigned against corruption in state government and against organized crime and gambling. Within the diocese, he removed barriers to the ordination of lesbian and gay candidates to the priesthood.

Elizabeth Fornal, director of Episcopal Charities for the diocese, said Hunt was an informal man who wore his purple bishop’s clergy shirt mostly on days when he was headed to the State House. “He had the ability to speak the truth to power and be consistent and not get angry,” said Fornal, who served on Hunt’s staff for four years. “But the governor and the people at the State House knew they had made a wrong move when they saw him coming.”

In the wider church, Hunt was known primarily as the leader of the so-called Hunt Commission, which recommended to the 1991 General Convention that the ordination of gay and lesbian candidates to the priesthood be left to the discretion of local bishops. The commission also recommended that the church continue to support marriage between a man and a woman “without withholding support and blessing from persons of the same sex who are in faithful, committed relationships, seeking in them the characteristics of sacrificial love and abiding care for the other.”

The report formed the basis of a compromise resolution at General Convention in 1991, and moved the church toward prohibiting discrimination based on sexual orientation, a step it took in 1994. In 2015, after more than two decades of debate, the church amended its canons to allow same-sex couples access to the rite of Holy Matrimony.

Hunt’s approach to diocesan ministry was perhaps best captured in his final address to the diocese’s annual convention in 1994. “Can we dare dream that our congregational/diocesan possessiveness of ‘our things,’ our prerogatives, our buildings, our own individual ways of worship, will be put aside in favor of a wider accountability to the whole mission of Christ’s Church?” he asked.

The answer, as he acknowledged in the same speech, was that the diocese was already responding to the question affirmatively. Most congregations in Rhode Island had food pantries, half served free meals, and Episcopal Charities, clothes closets and diaconal ministries were flourishing.

“He was humble, yet strong at the same time,” Fornal said. “When he asked you to do something it wasn’t just because he needed a hole filled, it was because he thought you had some gift to give. He was very affirming of lay people.”

Hunt was a son of the South whose early ministry took place in the West. He was born in Louisville, Kentucky, in 1931, graduated from the University of the South in 1953 and received his Master of Divinity degree from Virginia Theological Seminary in 1956, the same year he was ordained to the priesthood. He served numerous churches in Wyoming and California before being elected as bishop of Rhode Island. After his retirement, he served from 1995 to 1996 as interim bishop of Hawaii.

He married Barbara Noel Plamp in 1955 and the couple had three children. A memorial service has been scheduled for 11 a.m. on Nov. 12 at St. Patrick’s Episcopal Church, 9000 Sonoma Highway, Kenwood, CA 95452.