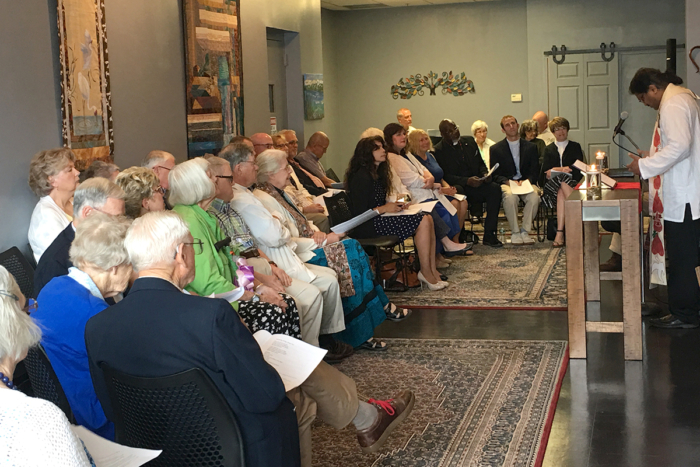 Trinity Place, in a storefront in downtown Geneva, New York, is the new home of Trinity Episcopal Church, a congregation more than 200 years old that left its historic building in 2018. Photo: Cameron Miller

[Episcopal News Service] An Episcopal congregation in the Diocese of Rochester, New York, thought it had the ideal solution to its inability to afford upkeep on its historic but aging building. A developer agreed to buy Trinity Episcopal Church in the Finger Lakes city of Geneva and turn it into a boutique hotel – while continuing to let Trinity use the old sanctuary for its services.

To make way for the developer’s renovations, the congregation in 2018 began worshipping in a rented downtown storefront, a move that parishioners assumed would be temporary.

Then a surprising thing happened. They really liked worshipping in the rented space.

The storefront, a former wine bar in the city’s bustling downtown entertainment district, was only a half mile away from the old church but a more intimate venue, and its flexibility made a variety of uses possible. The financial benefits were obvious – no church building to maintain.

“Not having a building is so liberating,” the Rev. Cameron Miller, Trinity’s part-time rector, told Episcopal News Service in describing how the congregation gradually grew to embrace the storefront as its permanent home. They named it Trinity Place, and Sunday worship services regularly draw about 30 worshippers, enough to nearly fill the room.

Now Trinity is considering how its renewed sense of mission can continue to grow and evolve. Church leaders have talked of starting “micro churches” that would meet in a variety of places, for different purposes and for different communities. And adding $340,000 from the property sale, it now has a $1 million endowment to support future endeavors. The congregation at Trinity Episcopal Church in Geneva, New York, dates to 1806. The church on Main Street was built in 1844 and partially rebuilt after a 1932 fire. Photo: savetrinity.org

“This is incredible. We have this space here now that we worship in, that we love. We have use of this other space [in the old church] that people love and the community loves. It’s an abundance of resources,” Miller said. “It’s just a wonderful opportunity for this church to experiment with new ways of being church, because it’s pretty clear the old way of being church is not working.”

Trinity, founded in 1806, had been struggling with declining membership for about two decades when Miller arrived in 2016 as its first permanent priest in many years. His first objective was to lead the congregation, largely made up of senior citizens, in a discernment process about its future, particularly what to do with its parish buildings.

As part of the process, the congregation determined the true facility cost, including the cost of properly preserving the buildings after years of deferred maintenance. The conclusion was sobering: $250,000 a year, far more than the $135,000 in annual revenue the congregation budgeted in pledges and proceeds from the endowment.

“You’re looking at a big shortfall,” Miller said, and even if the congregation was able to raise the money for repairs, “is that what you want all your energy and staffing to go for, managing a building?”

The congregation researched various options, including renting space in the church for community use and partnering with a housing developer on an adaptive reuse project. During that process, church leaders met Mark McGroarty, a Toronto-based developer, who proposed turning the parish house and rectory into 29 hotel rooms while renovating the sanctuary for weddings and other events. An artistic rendering shows what the renovated Trinity sanctuary will look like when it is converted into an event space, such as for weddings and receptions. Photo: savetrinity.org

The congregation’s membership held a meeting to consider McGroarty Investments’ proposal and other options. About 35 parishioners attended, and all but one said they favored the boutique hotel plan.

“It was a vestry decision, but the vestry wanted there to be a consensus,” Miller said. “The deal was we would continue to be able to worship there and have an office in the building.”

That deal, however, was delayed when some neighbors pursued legal action to block the redevelopment, saying it would alter the character of the residential neighborhood. As that litigation dragged on, the congregation moved out of the old church building and into the storefront.

“After we’d been worshipping there for about three months, the congregation fell in love with worship there,” Miller said. “The level of energy in the worship was amazing, and because it was multiuse space, we could adapt the space for liturgical seasons and go from formal to casual to intimate. It just allowed for so much creativity.”

The new location in the heart of downtown has brought new life to the congregation, Miller said, with a large portion of newer worshippers who never attended the previous services in the traditional church. Trinity Place also has invited nonprofit community groups to use the space for free when services aren’t being held.

As for the effort by some neighbors to block the redevelopment project, their petition opposing a zoning board’s approval made it all the way to a New York State appellate court, which sided with the developer and congregation in December 2020.

Trinity closed on the sale in June 2022, and the McGroarty Investments is expected begin renovations on the buildings by the end of this year. The sanctuary-turned-event space could become available again for Trinity’s use by June 2024, Miller said.

The congregation is discussing the possibility of forming a second worshipping community to resume services in the church sanctuary, though Trinity Place will remain the congregation’s home base. Other new ideas include a ministry of “sacred meals” for young adults interested in gathering on weekday evenings.

With older churches, often “the building tail wags the dog,” Miller said. His congregation was sorry to say goodbye to the old church but isn’t looking back.

“There was grief, no doubt about it. We went through a whole intentional grieving process when we left the building,” Miller said, but when they got settled in their new space, the consensus was, “Oh my gosh, this is so great!”