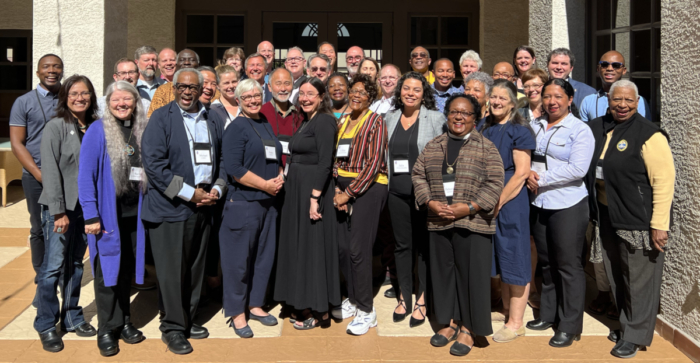 Members of the Executive Council of The Episcopal Church pose at the Hilton Phoenix Airport in Phoenix, Arizona, on Oct. 19, 2022. Photo: Amanda Skofstad

[Episcopal News Service – Phoenix, Arizona] Executive Council concluded the first meeting of its shortened two-year term on Oct. 20 having completed a series of orientations, presentations and team-building exercises intended to prepare the members – half of whom are new – for the work they will be tasked with before the 81st General Convention meets in 2024.

New committee chairs and officers settled into their roles during the four-day meeting held at the Hilton Phoenix Airport, where staff members and the longer-serving members of the 40-seat body educated the newly elected members on their responsibilities. Presentations included overviews of church finances, socially responsible investing, the canonical role of the council and the general structure of The Episcopal Church – along with the passing of wisdom and advice.

The Rt. Rev. Scott Hayashi, former bishop of Utah and a senior member whose term ends in 2024, said serving on Executive Council has made him a better person, expressing his wish that new council members will have the same experience. Addressing council members on Oct. 20, Hayashi said his new role as chair of the Joint Standing Committee on Governance and Operations is “simply one of the most moving experiences I’ve ever had in the church.”

In relation to A048, Executive Council passed a resolution that calls for a special virtual meeting in November to vote on a proposed amendment to the council bylaws that would create the new budget committee. The Governance and Finance Committees previewed some of the proposed elements of the new committee during the meeting, with the finalized version to be voted on next month.

Under the most recent proposal, the committee would include one member from each of the four Executive Council standing committees and five other people who may or may not be members of council. The makeup of the committee “shall represent the diverse voices of the church and a balance of the church’s [lay and ordained] orders,” the proposed bylaw revision says. New members would begin their terms on Jan. 1 after General Convention and conclude Dec. 31 after the next convention, although Finance Committee Chair Andrea McKellar emphasized that the proposal is still in flux.

Council also passed a resolution from the Finance Committee to approve minor changes to the 2023 churchwide budget.

“Our goal is to have a balanced budget for the [biennium], so there will always be annual fluctuations as events and projects and unexpected expenses arise and life happens,” McKellar told council. Changes in areas such as rented office space at church headquarters in New York City, loan repayments, rescheduled events and staffing resulted in an increase of about $533,000 in expenses, or 1% of the budget approved by the 80th General Convention.

The Finance Committee finished its presentation to council by continuing the previous council’s tradition of performing a pop song rewritten to summarize their work “because we can be a little dry with all our numbers,” McKellar said. For this meeting, Finance Committee members turned Dolly Parton’s “9 to 5” into “9 to 9,” referencing the tendency for their committee sessions to drag on into the night.

Other resolutions thanked the Rev. Geoffrey Smith, a deacon, for his service as chief operating officer of the Domestic and Foreign Missionary Society; Smith is retiring at the end of this year. A resolution from the Joint Standing Committee on Mission Within The Episcopal Church awarded creation care grants totaling $115,000 to nine ministries from nine dioceses, and a Finance Committee resolution distributed money from a fund for theological education in Latin America and the Caribbean to seminary students and dioceses.

The Rev. Michael Barlowe, secretary of General Convention, reported that the winter and spring council meetings would be held in San Francisco, California, and Providence, Rhode Island, respectively, with the following meeting tentatively planned for Quito, Ecuador.

In her closing address, House of Deputies President Julia Ayala Harris said the meeting had set the tone for the term, emphasizing that forging strong connections early on would strengthen the overall integrity of the council.