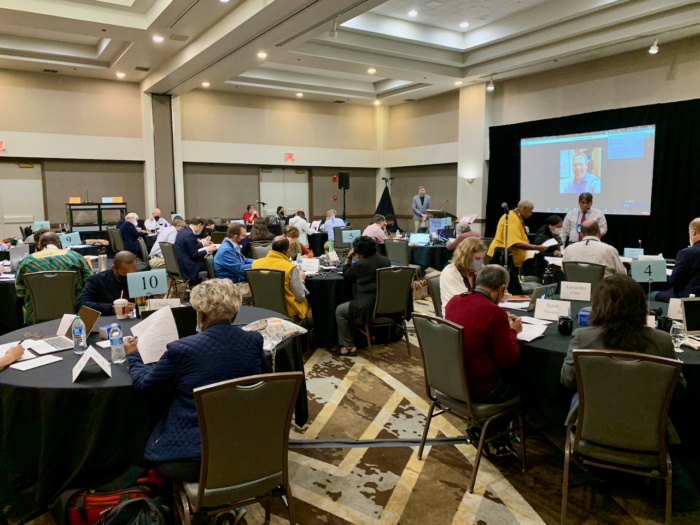 [Episcopal News Service – Phoenix, Arizona] At its meeting this week, the Executive Council of The Episcopal Church is welcoming 19 new members for the first time since 2018. The Oct. 17-20 meeting underway at the Hilton Phoenix Airport is primarily an orientation for the new members – as the first meeting of the term typically is – but this council will have to get up to speed quickly on issues like the changing procedures for setting a churchwide budget and its fiduciary responsibility.

As newly elected House of Deputies President Julia Ayala Harris warned in her opening remarks, using a phrase from her beloved “Star Trek”: “Brace for impact, Executive Council. For we have much work to do, and in such historic times.”

Half of the body is typically elected to six-year terms at each General Convention. Since this is a biennium instead of a triennium – due to the postponement of the 80th General Convention – this council has only two years to complete its work before the 81st General Convention in 2024. The “senior class” members “know that there’s almost no time,” Ayala Harris told Episcopal News Service before the meeting.

“The senior class has been there for four years already. They’re ready to take the bull by the horns and take leadership. They’ve proven themselves over these four years during the pandemic,” Ayala Harris said.

Presiding Bishop Michael Curry opened the meeting with an address that picked up on a theme he addressed at the previous council meeting: “minding the gap” between what the church is called to be and what it actually is, as revealed in the recent national poll commissioned by his office that indicated wide discrepancies between how Christians view themselves and how they are viewed by non-Christians.

The church has studied that gap, Curry said – and now is the time to close it. Using the parable of the persistent widow from Luke’s Gospel, Curry told council members to keep pushing to rectify injustice. He had recently visited St. Peter’s Episcopal Church in Hebron, Connecticut, whose first rector was a slave owner, he said. Instead of sitting with that knowledge, the parish participated in the Sacred Ground racial reconciliation program, did some research and identified about 70 descendants of those enslaved Africans, Curry said. Then the parish held a Juneteenth celebration and invited the descendants, some of whom attended, he said. That, he added, is an example of how to close the gap.

Ayala Harris gave her opening remarks via pre-recorded video because she had longstanding plans to officiate a cousin’s wedding. She is scheduled to arrive in Phoenix on Oct. 18. In her remarks, she expounded on the three themes she intends to focus on during her presidency: accessibility, inclusivity and safety.

“When taken together, these three priority themes will bring about institutional accountability,” she told council.

Each theme is connected with an item on the council agenda. Changes to the churchwide budgeting process will make it more accessible; adopting an Executive Council policy on honoring people’s chosen names and pronouns would make the body more inclusive; and updating the harassment policies for Executive Council and the Domestic and Foreign Missionary Society, the corporate entity through which The Episcopal Church operates, would make the policies stronger, she said.

At this meeting, council will discuss how to implement bylaw changes to the budgeting process, following up on reforms introduced at the 80th General Convention that are intended to streamline the process. Resolution A048 eliminated the Joint Standing Committee on Program, Budget, and Finance, instead allowing Executive Council to present its budget proposal directly to General Convention through a standing budget committee. In turn, Ayala Harris told ENS, that should make it easier for Episcopalians from all levels of the church to have meaningful input on the budget.

In his report, Treasurer Kurt Barnes delivered a mix of good news and bad news. Overall, income is as expected, with diocesan assessments in line with commitments and a sharp increase in ENS’ digital sponsorship revenue. However, income from the church’s refugee loan program – which provides small interest-free travel loans to refugees being resettled in the United States – was down because the number of refugee arrivals has not recovered to the levels authorized by the Biden administration, Barnes said. Overall expenses have been slightly below target, and the church’s short-term reserves are slightly above target at $11.4 million.

However, the church’s long-term investments have been affected by the downturn in the stock market. While the portfolio had been posting above-average returns in 2021, it has had a net loss of 20% over the past year, bringing it to $520 million. However, Barnes reminded council that investments like these are designed to weather such downturns and pointed out that the portfolio’s 10-year net return rate is 7.3%.

Over the next few days, council will hold orientation exercises for new members, review the actions taken by General Convention, elect ecumenical representatives, and learn about council’s role in overseeing church finances. Members will hear a presentation from Chief Legal Officer Kent Anker about the fiduciary responsibility of Executive Council – its canonical mandate to manage church finances in the best interest of church members. Council member Diane Pollard from the Diocese of New York will also give a presentation on corporate social responsibility, or how corporations can include ethical considerations in their decision-making. Andrea McKellar of the Diocese of South Carolina, new chair of the Joint Standing Committee on Finance, will give a presentation on the reformed budgeting process.

The influx of new leadership extends to the church’s many interim bodies: the committees, commissions, boards, task forces and agencies established by General Convention or church canons. Ayala Harris is responsible for making about 750 appointments; some are made in conjunction with the presiding bishop or others. Because of different time frames for certain bodies, appointments are being done in batches, and the first batch of about 450 people is complete. Over 1,200 people applied in total, using a survey from the General Convention Office that listed different topics applicants would want to focus on.

Ayala Harris, in her opening remarks, said she also intends to work with the Joint Standing Committee on Mission Within The Episcopal Church to appoint a new subgroup tasked with creating liturgies for survivors of abuse. Innovating and reforming the church “is imperative not just because new generations of young people expect or demand it of us if we want them to be a part of our church,” she said, “but because Jesus calls us to be a church of integrity and Good News for the world.”