[Episcopal News Service] The former administrator of the Clergy Assurance Fund, a nonprofit insurance corporation that has served the families of Episcopal clergy in Pennsylvania for centuries, is under investigation after a forensic audit found he misappropriated more than $1.4 million from the fund.

The allegations against John Miller, who served as executive director and treasurer until March 2022, were first detailed publicly in an Oct. 13 report by The Living Church. Internal documents cited by The Living Church and later obtained by Episcopal News Service show that Miller initially drew suspicion when improper credit card charges were found totaling more than $20,000. 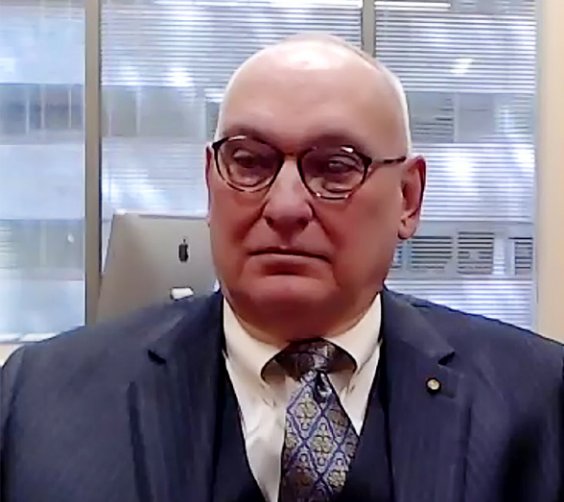 The Clergy Assurance Fund’s former executive director John Miller is seen in an image included in the fund’s 2021 annual report.

When the fund’s Audit Committee chair confronted Miller about the improper charges in March, Miller said he mistakenly thought the charges were allowed by fund policy, and he chose to retire rather than face termination, according to a summary of the case provided to the fund’s board by Vice President James Pope in a July 11 letter. An annual financial audit revealed that Miller also had written checks to himself that were “duplicates of payments of death benefits to beneficiaries,” according to Pope, who also serves as treasurer of the Diocese of Pennsylvania.

The Clergy Assurance Fund hired accounting firm BBD to conduct a more extensive forensic audit. Its report, dated June 28, confirmed that Miller had used the duplicate checks – at least one with Pope’s signature forged – to conceal deposits of $1,425,400 into his personal checking account from January 2016 to March 2022. It also listed the improper credit card charges, most of which were categorized as health care and transportation expenses, such as Uber rides.

“It is shocking that Mr. Miller, a long-term employee and officer of the Clergy Assurance Fund and an active Episcopalian, had abused the trust placed in him,” Pope said in a more recent letter to policyholders, the text of which was provided to ENS by a fund spokesman. “We are committed to doing all we can to support law enforcement in their investigations into these deceitful and criminal acts.”

“I was disappointed and devastated to learn of this potential fraud,” Pennsylvania Bishop Daniel Gutiérrez said in a written statement provided to ENS and The Living Church. Gutiérrez serves as board president of the fund, which represents all five Episcopal dioceses in the state. “Fortunately, it did not impact those who were seeking funds from CAF. I trust that the justice system will come to the correct resolution on this.”

The Clergy Assurance Fund traces its history at least as far back as 1769, when it was founded to offer financial support for the widows and orphans of priests in the colonies of Pennsylvania, New York and New Jersey. The joint fund was divided in 1806, establishing separate funds for the dioceses in each of the three states.

The Pennsylvania fund, long known as The Widows Corporation, was renamed the Clergy Assurance Fund in 2019, and it now serves beneficiaries in the dioceses of Pennsylvania, Bethlehem, Central Pennsylvania, Northwestern Pennsylvania and Pittsburgh. Its board is made up of the five diocesan bishops and 35 elected volunteer members.

Online records show that Miller had been serving as both executive director and treasurer since 2014, when the previous treasurer, the Rev. Rudy Moore, died after serving 18 years in that role.

“As treasurer, it is my responsibility to manage the business activities of the corporation and it is my pleasure to report to you that all is well and thoroughly in order in that area,” Miller said in the fund’s 2014 annual report.

At that time, the fund had more than $71 million in assets, including nearly $43 million reserved for paying future death benefits. By the 2021 annual report, assets had grown to nearly $82 million, though that total did not reflect the sharp downturn that would hit stock markets in 2022.

Pope, in his July letter about the misappropriated funds, reassured the board that the fund remained in a sound financial position. “Despite this fraud and the unrelated reductions in market values in the second calendar quarter of 2022, Clergy Assurance Fund remains very well-funded,” Pope said. The fund plans to submit a claim to the provider of its insurance, which covers employee theft.