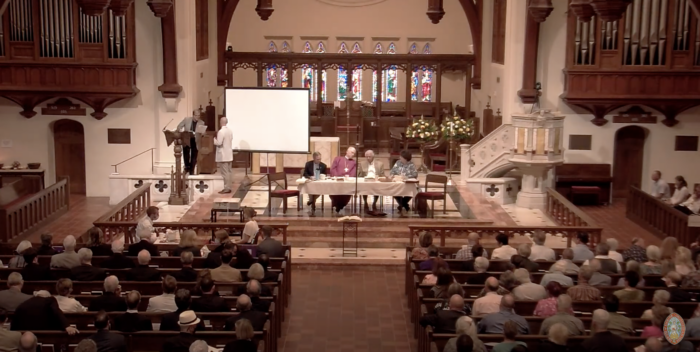 [Episcopal News Service] A group of clergy and lay delegates set to participate in the Diocese of Florida’s second attempt at a bishop coadjutor election have asked the diocese to postpone the vote, citing complaints about procedural details and an atmosphere of mistrust in the diocese.

Delegates are scheduled to gather at a special convention on Nov. 19 to elect a bishop who would eventually succeed retiring Diocesan Bishop Samuel Howard. It is the second time in a year that such a convention has been called; the election of the Rev. Charlie Holt on May 14 was nullified after the churchwide Court of Review found it was conducted improperly and Holt later withdrew his acceptance.

The signatures on the Oct. 12 letter to Howard and the diocese’s Standing Committee, provided to Episcopal News Service by one of the signatories, include 18 clergy delegates and 13 lay delegates, as well as dozens of parishioners. Among the signers is the Rev. Wiley Ammons, one of the five candidates in the May election.

“We believe that this election is being rushed forward without systematically and thoroughly addressing some key issues that have become evident in the Diocese of Florida,” the letter reads. “We are concerned that this election will not be valid canonically, nor are the candidates being fairly and impartially presented by the diocesan office. It is out of love and concern for the Diocese of Florida, for its unity and its mission, that we write this letter asking for postponement of the scheduled election on Nov. 19, 2022.”

Holt and two of the other candidates in the May election, the Rev. Miguel Rosada and the Rev. Beth Tjoflat, are on the ballot for the new election, which is scheduled to be held entirely in person at Camp Weed in Live Oak. A member of the standing committee, the Rev. Sarah Minton, told ENS the committee was reviewing the letter and would respond in the coming days.

The letter lists eight primary complaints that range from concerns about canonical language to broader disagreements within the diocese. The more substantial complaints deal with the eligibility of delegates, the primary problem identified by the Court of Review with the May election. In particular, the number of people who qualify as “canonically resident clergy” in the diocese has been a point of contention throughout the process; two-thirds must vote to reach a quorum, but the total number has been debated, as some are incapacitated or live outside the diocese. The diocese stated that it had 174 canonically resident clergy in its response to formal objections filed in May.

The letter asserts that the diocese has still not settled on a final list of canonically resident clergy, and that priests who have been denied canonical residency in the past are appealing to the bishop now.

“We are just over a month from the election,” the letter reads. “This process of clearly defining and examining each priest and deacon cannot be done in a matter of months and must be given time and patience to be done correctly.” The letter also says the process of selecting lay delegates is “under scrutiny and is not clear to all parishes, nor evenly applied,” but does not elaborate.

The criteria for who can vote is laid out in the diocesan canons. Last month, the standing committee released a 16-minute video in which the Rev. Joe Gibbes, standing committee president, answered questions about the election process, including the guidelines for determining canonical residency. Also in October, the diocese emailed a list of the number of lay delegates allotted to each parish, based on average Sunday attendance. The total number of lay delegates is 134.

Without going into details, the letter asserts that “trust has eroded in the diocese” and “previously and long-scheduled opportunities for dialogue and communion among diocesan clergy and laity have been shut down by the diocesan leadership.” It also claims that candidates who were approached for nomination refused because of the lack of stability in the election process.

On Oct. 13, the standing committee sent a convention update finalizing the existing three-candidate slate and saying it had not received any applications by petition.

The letter also objects to the diocese’s decision to hire Holt as a priest on the diocesan staff during the period when the first election was under formal review, though Holt is not named. The diocese “endorsed said candidate by placing that person on their payroll, and having that person systematically visit parishes, effectively campaigning,” it says.

The letter does not recommend a specific time frame for a new election but asks that the diocese “reconsider the timing of this election.”