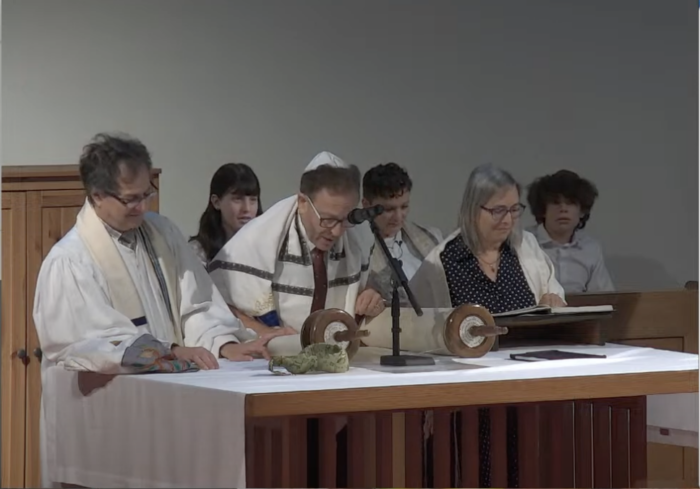 [Episcopal News Service] When a synagogue in Austin, Texas, was left without a place to hold its High Holy Days services after its building was damaged in an arson attack, an Episcopal church stepped up to offer its sanctuary. In hosting the Rosh Hashanah and Yom Kippur services for Congregation Beth Israel over the last two weeks, St. Matthew’s Episcopal Church was living up to the Scripture passage inscribed on the outside of the building, said the Rev. Katie Wright, rector.

“A house of prayer for all people,” the plaque reads – a quote from Isaiah 56:7.

The High Holidays, the holiest time of the year in Judaism, include Rosh Hashanah – the celebration of the new year in the Hebrew calendar – and Yom Kippur, the somber Day of Atonement marked by fasting and prayer. Synagogues typically see the highest attendance of the year during this 10-day period.

But Congregation Beth Israel was unable to accommodate the large number of worshipers this year because of a hate crime that happened a year ago. Last Halloween, an 18-year-old Texas State Guard member, reportedly motivated by anti-Semitic and right-wing ideology, set fire to the building. He faces federal arson and hate crime charges.

Initially, the damage was thought to be limited to the exterior of the building, but further investigation revealed damage in the main sanctuary that is proving more difficult to repair. Rabbi Steven Folberg told local news station Fox 7 Austin that repairing the building was like “peeling back an onion,” revealing layers of asbestos and other hazards. Initially estimated at $25,000, the repairs are now expected to cost nearly $1 million, Folberg said.

Since the fire, Congregation Beth Israel has been temporarily using a smaller space in the building for services, but it isn’t big enough for High Holy Days attendance, so Folberg contacted Interfaith Action of Central Texas.

Congregation Beth Israel had previously used another church’s space, but that church did not share their values of LGBTQ+ inclusivity, Wright told Episcopal News Service. When the congregation started looking for another, bigger space, IACT’s executive director “knew enough about us to know that our values would align with their values” and approached St. Matthew’s, Wright said. 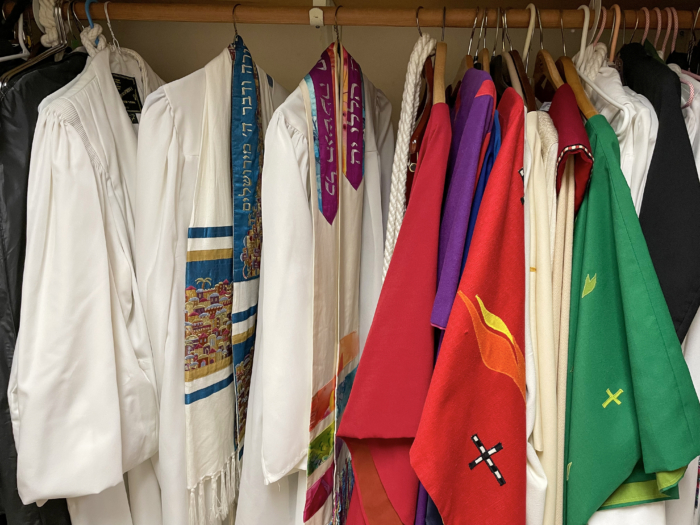 “They came and toured the facilities and we all agreed that it was a good fit. So we blocked the days on our calendar and a lot of folks here at this congregation did a lot of good work to help make them feel welcomed and get all the technical things figured out,” Wright told ENS.

To make the church more suitable for Jewish services, some easily movable Christian symbols like crosses were temporarily removed from the sanctuary or covered, and the clergy consulted on appropriate ways to use the space.

“I was so overwhelmingly happy to have all these people that I love in person and to hear them singing and to just be together. I mean, that was glorious,” Folberg said. “The sadness and the tragedy and the ugliness of what happened to us … was overwhelmed by the graciousness and kindness that the St. Matthew’s folks showed us.”

The attack on Congregation Beth Israel was among a string of anti-Semitic incidents in Austin last fall, including anti-Semitic graffiti and banners hung over highway overpasses. Mayor Pro-Tem Alison Alter, a member of the congregation, called the arson “an attack on all of Austin.”

This was not the first time an Episcopal parish has offered its worship space to its Jewish neighbors. In 2019, Calvary Episcopal Church in Pittsburgh, Pennsylvania, also offered its sanctuary for High Holy Days services after a neo-Nazi terrorist killed 11 people at nearby Tree of Life – Or L’Simcha Congregation.

Reported anti-Semitic incidents in the United States reached an all-time high in 2021, according to the Anti-Defamation League. Violence, harassment and vandalism targeting Jews had been declining in the U.S. for about 15 years until 2016, when they started increasing sharply, the ADL reported.

The Episcopal Church has released a set of guidelines for appropriate theological engagement between Christians and Jews here.