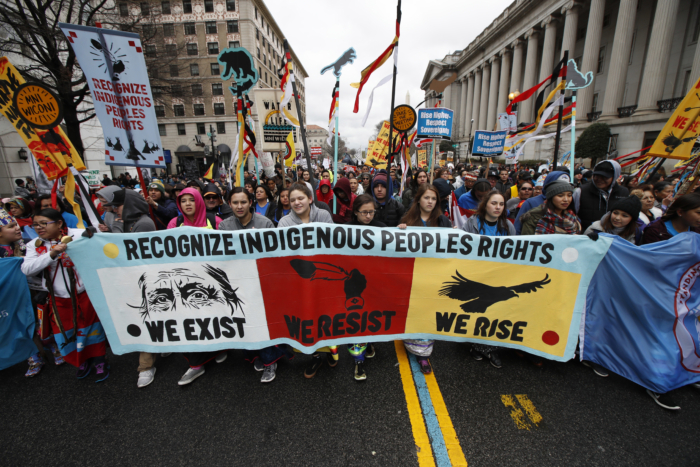 America Indians and their supporters march toward the White House in 2017 to rally against construction of the disputed Dakota Access pipeline. Photo: Associated Press

[Episcopal News Service] Episcopal dioceses and congregations are preparing services and celebrations marking Indigenous Peoples’ Day as part of the nationwide movement away from honoring the Italian explorer whose federal holiday, Columbus Day, is the second Monday in October.

This will be the first Indigenous Peoples’ Day since The Episcopal Church registered its support for the movement. At its July meeting in Baltimore, Maryland, the 80th General Convention passed a resolution specifically calling on churches and dioceses to designate a day honoring Native Americans and to refer to Columbus Day as Indigenous Peoples’ Day.

“Observance of Indigenous Peoples’ Day would serve as a celebration and a remembrance of the Indigenous peoples who have for thousands of generations safeguarded the land, and who, in the face of cultural genocide, preserved their languages, traditions, stories, and ceremonies for future generations,” the resolution says.

The Diocese of Massachusetts plans to mark Indigenous Peoples’ Day during Holy Eucharist on Oct. 9 at Old North Church in Boston and at a gathering Oct. 10 at Christ Church in Plymouth. The Rev. Cornelia Eaton, canon to the ordinary of The Episcopal Church in Navajoland, will preach at the service in Boston and will join a symposium at the event in Plymouth.

Many individual churches are observing Indigenous Peoples’ Day in their own ways. St. Paul’s Episcopal Church in Brunswick, Maine, will acknowledge the holiday during Sunday morning worship. St. David’s Episcopal Church in Baltimore, Maryland, will welcome a representative from the Baltimore American Indian Center at an Evensong. Churches in the Diocese of Southwestern Virginia are encouraged to incorporate Indigenous prayers into their services.

And in Lexington, Kentucky, clergy and lay leaders at St. Michael’s Episcopal Church are committing their congregation to learning more about Native American tribes in their area and recognizing Indigenous history and culture at each Sunday service this month.

“Much of the story of the Indigenous people of the United States has been edited and erased,” the Rev. Laurie Brock, St. Michael’s rector, said in a parish newsletter. “Thankfully, though, we are slowly creating the holy silence for the words, images, dances, songs, and stories of the rich cultures of the United States that existed hundreds of years before most of our ancestors arrived.”

Numerous resources are available for Episcopalians wishing to commemorate Indigenous Peoples’ Day in their communities, including The Episcopal Church’s Office of Indigenous Ministries’ “A Disciple’s Prayer Book.” The Diocese of Arizona created a liturgy specifically for Indigenous Peoples’ Day after its convention passed a resolution in 2019 adding the day to the diocesan calendar.

An increasing number of states, cities and churches in the United States are choosing to celebrate Indigenous Peoples Day in place of Columbus Day as part of a growing re-examination of the legacy of Christopher Columbus’ journeys to North America.

The Italian explorer, hired by the king and queen of Spain in the late 15th century, often receives credit for “discovering” America in 1492, even though he never set foot on mainland North America, and the continent already was home to millions of people whose ancestral history dates back around 15,000 years. Historians also note Columbus’ record of brutal mistreatment and enslavement of many of the land’s indigenous inhabitants.

“Columbus was a hired gun. The Spanish crown needed someone to advance its interests. Like a gun, Columbus, as a representative of power, quickly became an agent of violence,” the Ojibwe author David Treuer writes in “The Heartbeat of Wounded Knee,” a 2019 history of Native America.

At least 14 states have stopped officially celebrating Columbus Day, along with over 130 local governments, according to USA Today.

The movement transcends partisan political divides. Both President Joe Biden, a Democrat, and Texas Gov. Greg Abbott, a Republican, took actions in 2021 to declare an Indigenous Peoples’ Day holiday. Biden became the first president to issue such a proclamation, though Columbus Day remains on the federal calendar because it was established as a holiday by Congress.

The Episcopal Church’s General Convention at least since the 1970s has expressed support for Native American land claims and human rights, and a resolution in 2009 explicitly repudiated the Colonial-era Doctrine of Discovery, which purported to give Christian explorers the right to claim lands they “discovered” and convert the people they encountered.

Celebrating Indigenous Peoples’ Day is another way for congregations to confront that history. At Christ Church Cathedral in Cincinnati, Ohio, an Indigenous Peoples Weekend is planned. A workshop on Oct. 8 will feature several Indigenous leaders, including the Rev. Bradley Hauff, The Episcopal Church’s missioner for Indigenous ministries. Hauff also is scheduled to preach the next day at the cathedral.

Hauff told Episcopal News Service he is encouraged by the increased attention to the holiday, especially after the 80th General Convention passed its resolution. “My hope is that this will lead to an increased number of dioceses and congregations designating an Indigenous Peoples’ Day and celebrating it,” he said.